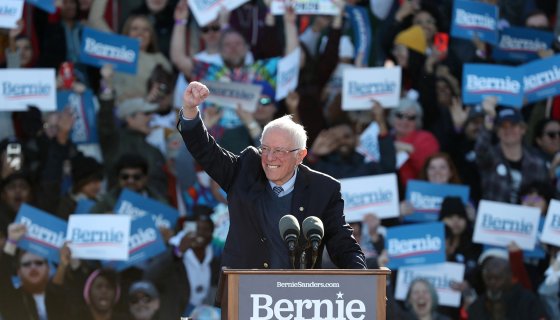 The writing was perhaps long cast on the wall that would need to end his second bid for the Democratic Pary nomination as Joe Biden snagged endorsement after endorsement. On Wednesday (April 8), the officially ended his presidential campaign, giving away to the former vice president to ascend to the top of the ticket.

For many observers, this news isn’t especially shocking considering Sanders failed to attract support from some of the Democratic Party’s more prominent names along with the murmurs of his Democratic Socialist ties being viewed as harmful by some voters.

Coupled with the fact that Biden not only enjoyed name recognition while serving alongside President Barack Obama in the previous administration, the Delaware native also tailored his campaign as a definite assault on the reign of President Donald Trump.

Sanders, 78, was a spirited debater and showed some fight in certain polls but was ultimately undone by the running perception by his opponents that his policies would be costly to the federal government and reeked of socialism. As it stands, Sanders is currently addressing his supporters and the public his campaign website this morning but it isn’t known if he’ll endorse Biden going forward.

The reactions across Twitter show levels of both gratitude and disappointment. We’ve collected the best responses we could find below.

it's still bernie sanders you bastards

Bernie Sanders truly believed in a, "we," America. He wanted to stop the divide and so much more. The worst part about this is for the next month, Trump and those who idolize him will never shut up about it. #ThankYouBernie

Bernie Sanders has inspired millions of people, young and old alike. He has made mainstream ideas like Medicare for All, tuition-free public college and the Green New Deal. We owe him a debt of gratitude, and I look forward to fighting beside him in the Senate in 2021.

Bernie Sanders stans: DONT SAY YOURE NOT VOTING FOR BIDEN. YOU HAVE TO. pic.twitter.com/y2TS2dlS9T

1/2 of me: Wow Bernie Sanders dropped out! Good!

The other of 1/2 of me: The disrespect he gave to Hillary Clinton by waiting until July😤

reminder to everyone inexplicably gloating that it was never about Bernie Sanders, the person. it was about having someone vocalize what a lot of marginalized folks have been screaming about for decades and that isn’t going to change.

bernie sanders dropped out NOW WHAT THE HELL ARE WE GONNA DO pic.twitter.com/Hn9Wth6sKf

Bernie Sanders has dropped out of the race. I’ve been hard on him for staying in this long, but I really appreciate that he’s doing this now. Joe Biden is the Democratic nominee. Let’s go win this in November!

It's obvious where the energy is in American politics, and increasingly clear how urgently we need to make major changes, or drown. I would love for Bernie Sanders to be around to see that happen, because he did more than anyone in my lifetime to galvanize and clarify all that.

Whatever you think about Bernie Sanders, this has to be personally incredibly difficult decision (almost certainly his last shot) and a great disappointment for millions of his supporters. For Dems hoping for victory in November that's where to focus.

“Since Bernie Sanders dropped out, will you lend your support to Joe Biden??” pic.twitter.com/K8HnjSO6lY

While Sanders and Biden differ on issues and their voting bases differ ideologically, an even bigger divide is that Bernie voters have lower levels of social trust and confidence in institutions, something Trump is poised to exploit.