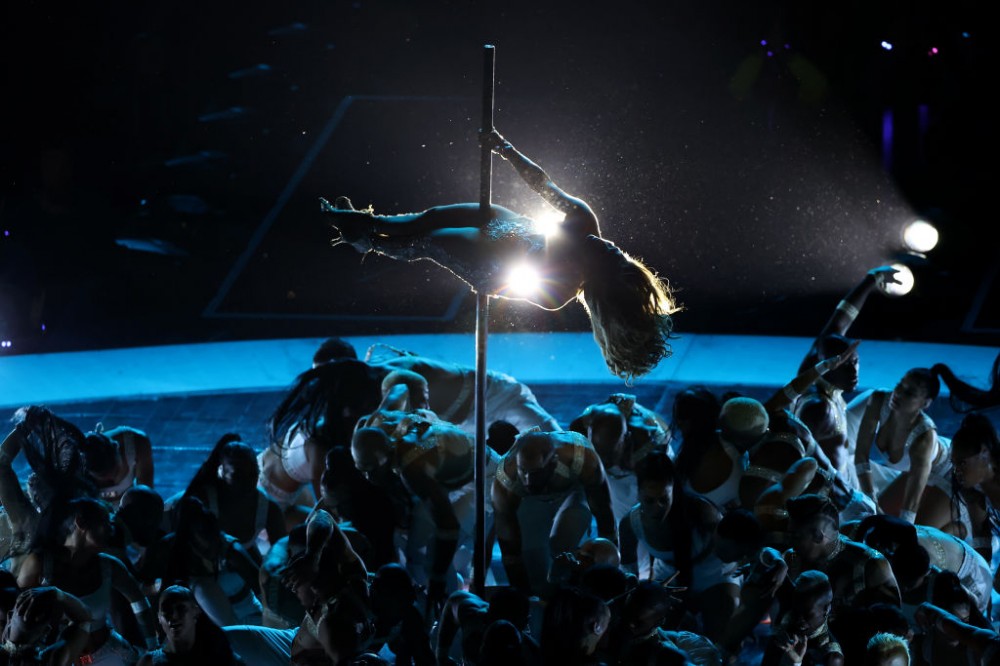 Jennifer Lopez and Shakira dominated the stage at the Super Bowl LIV halftime show on Sunday night. Together the divas brought over 60,000 football fans to their feet at Miami’s Hard Rock Stadium, with an electrifying medley of songs old and new.

Shakira kicked off the show with a parade of English-language hits such as “She Wolf” and “Empire,” plus a reggaeton remix of “Whenever, Wherever.” Recent Grammy nominee Bad Bunny emerged for an abridged version of “I Like It” followed by a salsa version of her hit Spanish-language song “Chantaje,” with Bad Bunny interspersing lines from his own single, “Callaíta.” After a spirited version of “Hips Don’t Lie,” Shakira dove into the mass of screaming fans.

Mounted on a skyscraper-turned-stripper pole, Lopez opened with a funky remix of “Jenny From The Block,” plus 2000s hip-hop classics  “Ain’t It Funny,” “Get Right.” She was joined by a number of strippers onstage in time for “Waiting For Tonight” — the Grammy-nominated Colombian artist J Balvin opened with his Diplo collaboration, “Que Calor,” remixed with Lopez’s Spanish-language track “El Anillo.” As Balvin marched into his first Number One hit, “Mi Gente,” Lopez mashed it up with her anthemic 2001 single, “Love Don’t Cost A Thing.”

Lopez’s daughter, Emme Muñiz, made a cameo appearance during J. Lo’s 1999 salsa number, “Let’s Get Loud.” Supporting in the background was Shakira, who knocked out a solo from behind a drum kit — as Lopez emerged covered in a feather cape, tailored to look like both the U.S. and Puerto Rican flags. Together they closed with Shakira’s global sporting anthem, “Waka Waka (This Time for Africa.)”

Prior to the halftime show, the Latina superstars teased their joint Super Bowl appearance with two standout singles: Lopez with her rendition of Dayvi’s sleeper hit, “Baila Conmigo,” and Shakira with “Me Gusta,” a work of reggaeton lento with co-star Anuel AA.

Shakira is reportedly working on a follow-up to her Grammy-winning 2017 album, El Dorado. Lopez Is set to star opposite Owen Wilson in the upcoming 2020 film Marry Me, which will also feature Colombian singer Maluma.