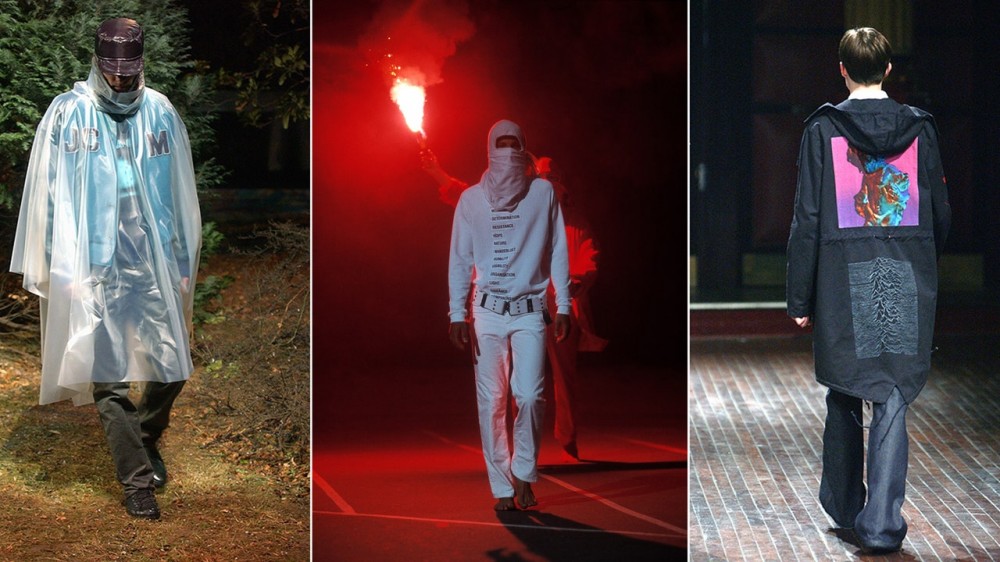 Raf Simons Spring 2002: “Woe Unto Those Who Spit on the Fear Generation…The Wind Will Blow It Back”

The occasion for reflection comes as Simons reissues 100 of his most iconic pieces in a capsule collection called Raf Simons Archive Redux, which has been wildly buzzed about since the designer announced the project last summer. Again, the sheer mention of it pulls fashion lovers out of the woodwork—in the months I have been working on this project, somewhere in the vicinity of three-dozen different people have messaged me asking about it.

One of the first was David Casavant, the New York–based collector and archivist who perhaps single-handedly vaulted Simons’s past pieces into icon status by placing them on Kanye West, Rihanna, and other influential celebrities. “Remaking the original pieces shows how fashion is looked at as more of an art form now, where the original works are appreciated to such an extent to reissue them,” Casavant says. “I’m excited to see core grail pieces like the hoodies and parkas and how they’re remade.” (As for how new Raf pieces on the market might affect his extensive archive, Casavant equates it to rare books: Original issues retain value, while newer prints spread the word to new audiences.)

The widespread impact of Simons’s influence cannot be understated either. With a winding career that took him from his eponymous brand to Jil Sander, Christian Dior, Calvin Klein, and now Prada, Simons has had the opportunity to take on almost every facet of the industry. “Most people interested in fashion understand the influence of Raf Simons as a designer. His eponymous label is one of menswear’s most thought-provoking and has arguably shifted our perception of what men look like and how they dress,” says Damien Paul, the head of menswear at MatchesFashion.com.

By rereleasing his archival pieces, Simons not only affirms his ownership of ideas that have by now become standards, but also invites a new generation into his world. “For so many this product has only existed on Tumblr or Instagram pages, either unattainable due to sheer scarcity or the fairly wild resale values, which put the true archive pieces out of the realms of most customers,” says Sam Lobban, the senior vice president of designer fashion at Nordstrom. “Now with Redux, those same customers have the opportunity to buy the product, produced to their original spec, at a price which is aligned to current, new item Raf Simons prices—considerably less than the resell prices at the very least!”

So what will the new archive grails be? Lobban predicts the spring 2002 Kollaps hoodie, the fall 2002 Virginia Creeper sweater, and the fall 2002 Nebraska sweater will be hot sellers—see them in our new archive and shop them below.