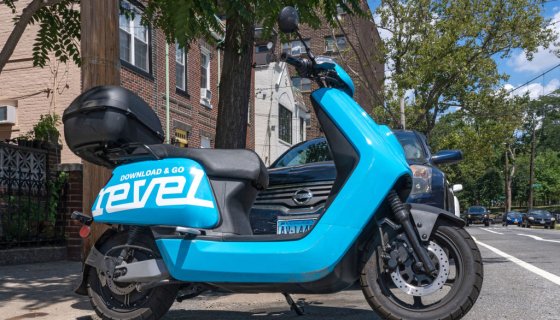 Add those convenient Revel scooters to the list of things New Yorkers can no longer enjoy because we can’t have nice things.

We know you have seen those blue Revel mopeds flying up and down your block or parked on the street recently. The electric scooters have are a THING now as a result of and have become popular among New Yorkers who don’t like to pedal on a bicycle and need to get around the city. Unfortunately, its a wrap… for now, for the insanely convenient travel option Gothamist is reporting because of knuckleheads who refuse to practice safety while using the scooters.

The company, which was founded in 2018, announced it will now be suspending all operations in NYC “until further notice” following the death of a second rider in just two weeks in a tweet shared on the company’s official Twitter account.

“We’re reviewing and strengthening our rider accountability and safety measures and communicating with city officials, and we look forward to serving you again in the near future.”

New York riders – starting today, NYC service will be shut down until further notice. We’re reviewing and strengthening our rider accountability and safety measures and communicating with city officials, and we look forward to serving you again in the near future.

The announcement follows the tragic death of 32-year-old Jeremy Malave, Tuesday morning. The Cypress Hills native passed away after suffering a fatal head injury when the Revel scooter he was operating crashed into a center median on Woodhaven Boulevard in Queens, according to law enforcement.

Malave’s death comes on the heels of CBS2 reporter, Nina Kapur dying after she was flung to the ground while riding on the back of a Revel scooter in Greenpoint, Brooklyn, Malave’s tragic passing marked the first death of anyone riding on a Revel since the company’s inception in 2018.

Tragically, her life was cut short following a fatal incident while she was a passenger on a #Revel scooter. Nina’s story is heartbreaking and we send our condolences to her family, friends and colleagues at @CBSNewYork. pic.twitter.com/tGz9jNfBxX

In response to those claims, Revel has since required users to complete an in-app safety exam. The company has also suspended more than 2000 users for riding around recklessly. We shall see how this pans out for the company that experienced a major boom in business since the arrival of COVID-19.