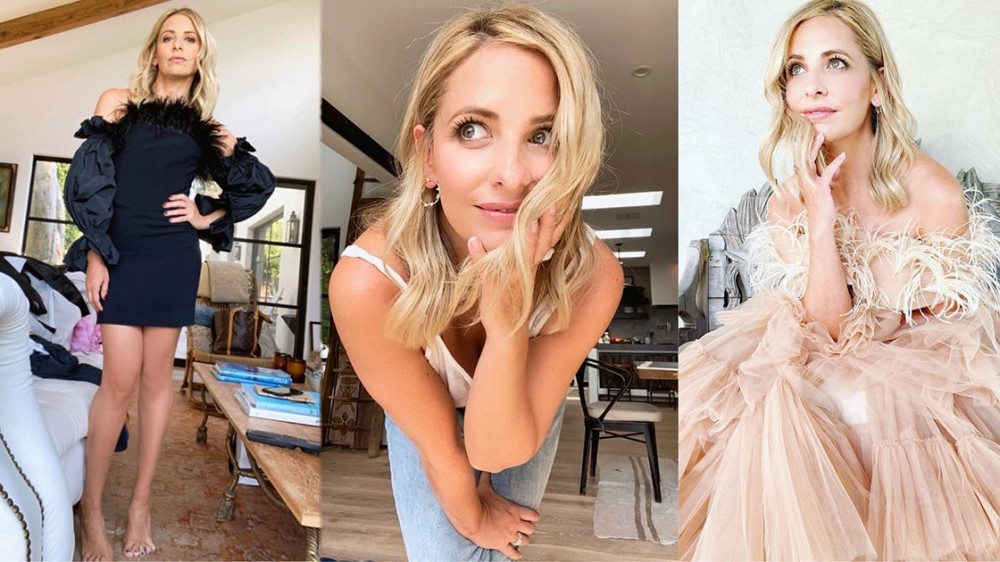 Every October, I think about Sarah Michelle Gellar. Why? Because while Jamie Lee Curtis may be the official scream queen, Gellar is my scream queen. I grew up obsessed with I Know What You Did Last Summer and The Grudge. My Halloween tradition is to marathon all of her best films, not to mention re-watch old episodes of Buffy the Vampire Slayer, my favorite TV show. Just earlier this week, I watched Gellar play Cici in Scream 2, in which—spoiler alert—ghost face throws her off the roof of her sorority house. A cinematic masterpiece! This month, however, Gellar popped into my mind for a different reason: her Instagram. The actor has been using her social media as a vessel for glamorous WFH fits, and the fabulous ensembles instantly struck my eye. Her feathered gowns and sleek black jumpsuits are hardly your typical 9-to-5 Zoom outfits. Intrigued, I had to learn more about them.

Turns out, Gellar has been trying to master the art of Zoom dressing just like the rest of us. As an actor and busy mom to two children with her husband, Freddie Prinze Jr., Gellar has been maintaining a busy schedule in California that doesn’t always lend itself to focusing on fashion first, especially when her husband is filming. “At this point, I’m the chef, laundress, IT specialist, and the principal,” she says. “The remote learning is the killer. You know the old saying, ‘Those who can’t do, teach’? That’s not true.”

In the midst of putting on all these different hats, Gellar also has her own career, and she says she’s been busy with Zoom meetings and experimenting with dazzling, Zoom-ready looks to go with them. Recently, she’s worn a black cocktail dress, a sleek jumpsuit, and even Buffy’s prom dress. “If I get dressed the full way, I stand up in the Zoom at some point just to give myself props,” she says. “My tip for Zoom dressing is don’t dress from the waist-up. Think about your whole outfit. The way you sit and present yourself is still different if you have sweatpants on.” She says her recently-snazzy WFH outfits are new territory, though. At the beginning of lockdown, loungewear and sweats were her go-to. “I did change from my daytime pajamas to nighttime pajamas, because I felt like I needed to set a good example for my kids,” Gellar says. “I realized that not washing my hair or putting in any effort was affecting how I felt about myself, and what I was putting out there for my family. I was like, it's time I start putting myself back together.” In other words, Gellar felt ready to embrace glamour again.

One of the first opportunities Gellar got to really dress up this year was as a virtual guest of Christian Siriano’s spring 2021 show in September. The designer, who is a close friend of Gellar’s, sent her a feathery, tulle pink gown to wear for the occasion. And while she felt fabulous the moment she put it on, it was seeing her daughter in the chic frock that reminded her of the power that fashion can hold. “I came home and my daughter was wearing the gown in our backyard,” Gellar says. “She was twirling, and my husband and my son were there, and they were all laughing and giggling. It reminded me of the magic that comes with fashion.” It also got her thinking about how the arts can uplift our spirits during difficult times. “After 9/11, we were on Buffy, and I had a very hard time going back to work,” she says. “But I realized, I do have a part in all of this: I help people forget tragedies. For an hour, I can take them away from the things that are stressing them out, and give them entertainment and transport them. That's what Christian does with fashion.”

As an aforementioned scream queen, you can bet Gellar will also be serving a look on Halloween later this week, too. It’s a tradition for the family to partake in the holiday. “My husband and I usually do a costume together,” says Gellar. “This is the first year we're not, because we just didn't get our shit together in time. Instead of us doing a couples costume, I'm doing a couples costume with my daughter, and he's doing one with our son.” They’ll likely spend it watching a scary movie in their backyard on a big projector (something she calls a “quaran-purchase: something you buy in quarantine that you would have never bought otherwise.”) “My kids love [scary movies],” says Gellar. I ask if she’s heard about the news that I Know What You Did Last Summer is being rebooted. “No, but isn’t everything?” she says. “I did like the billboard that said, ‘I Know What You Did Last Summer: fucking nothing.’ That was my favorite meme of the summer.”