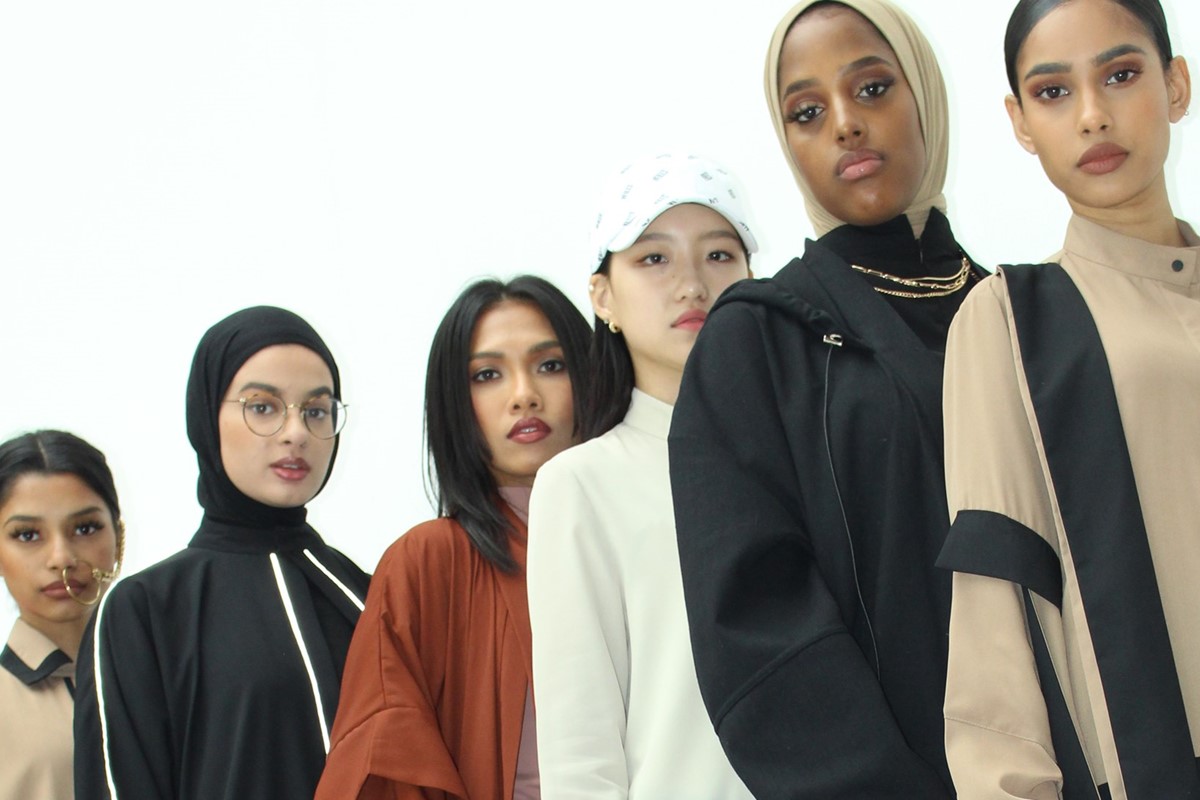 As Muslim women’s attire continues to be scrutinised and demonised in western society, a rising gen of designers are making moves to shift the narrative when it comes to modest dressing. Among them is Saeedah Haque, whose SS21 collection got its runway debut as part of VFILES’ inaugural LAB show earlier this month.

Having turned her attention to fashion when she failed to find the clothes she wanted to wear already on the market, the London-born Bengali creative now turns out offerings that infuse traditional Islamic garments with streetwear sensibilities. “Growing up, I never found abayas that resonated with my style – they were always quite dated and traditional-looking,” she reveals. “I never wanted to compromise my modesty, but I wanted to wear my Nikes and jackets with everything.”

Canada dropped its official Olympic ‘fits and we have questions

What went down at Gucci’s sexy, whip-cracking centenary show

This season, Haque presented an understated collection that reimagined the abaya for the young, contemporary wearer. In a muted palette of neutrals – think rich browns and burgundies, cream, and faun – SS21 was all about oversized silhouettes detailed with functional, military-inspired accents including big patch pockets and contrasting buttons. Elsewhere, styles were finished with utilitarian straps and reflective trims that glowed as the light hit them. For her, it was about creating something clean and cool that’s easy to throw on with a pair of trainers, and turning away from the glam aesthetic that dominated when she was growing up.

While high profile hijabi models including Halima Aden and Ikram Abdi Omar have made their mark on the world’s runways – walking for the likes of YEEZY, Savage x Fenty, and Burberry – beyond modest brands, Muslim woman remain woefully underrepresented within the fashion industry’s ateliers. VFILES’ LAB programme aims to give a platform to underrepresented creatives, with Haque joining seven other designers from around the world on this season’s line-up. Given VFILES has acted as an incubator for leading talent including Virgil Abloh, Matthew Williams, Rushemy Botter, and Kardashian-fave Pierre-Louis Auvray, it looks like Haque’s star might just be set to rise, too.

Here, we get to know her a bit better as she talks joining the VFILES line-up, where she finds inspiration, and the message behind her new collection.

Hey Saeedah! Can you talk me through your brand? What’s it all about?

Saeedah Haque: My brand is the first brand to take the abaya and reinvent it in the streetwear space, so that’s always been my foundation. My clothing is about being unapologetic, amplifying Muslim voices, and writing the narrative ourselves.

And what was this particular collection about?

Saeedah Haque: In the media our bodies are often associated with violence and fear-mongering, and I really wanted to reclaim that narrative and present it in an empowering space. A space where it wasn’t feared, but celebrated. I was inspired by military elements, which I weaved into the abaya garment as a way of reinterpreting the whole idea.

How did the VFILES LAB gig come about?

Saeedah Haque: I saw the application on my Instagram, but honestly did not think I would get in. I think this is the issue with representation – when you’re not represented, you just don’t think you’re going to have a chance. But that is what is so great about VFILES – it really is about empowering youth and having kids outside the party join in and come inside.

Initially, I thought my ideas were a bit too powerful, and that they say a bit too much – they can be interpreted as quite controversial. But when I got the call (to join the line-up) it was great because the team is genuinely trying to amplify the voices of those that are often unheard. They didn’t try to water my ideas down – I was given the platform to play around and be authentically myself, which was really important to me. I hope that, in seeing me win a place, underrepresented women see there is a space for them to do the same.

“I saw the application (for VFILES) on my Instagram, but honestly did not think I would get in. I think this is the issue with representation – when you’re not represented, you just don’t think you’re going to have a chance” – Saeedah Haque

Going back a bit further now: what was your first encounter with fashion? Or when did you realise its power?

Saeedah Haque: I was always creative growing up, but I’m also passionate about world affairs. I grew up realising things are very different when you are Muslim, or when you are Brown or Black. When those things are mixed together, it’s even more of a challenge. Watching the news or seeing things happening around me, I knew I wanted to do something bigger with my talent and have it say something powerful. I think I came to it quite naturally. I’m an activist at heart and the channel that I use to speak my truth is through fashion. Clothing is so powerful in channelling ideas and expressing how we feel. I wanted to speak to audiences through my clothing.

Despite the rise of the modest fashion industry, you don’t really hear ‘abaya’ and ‘streetwear’ being used in the same sentence’. How does your work bring together contemporary and classic design?

Saeedah Haque: Growing up wearing an abaya, I never found one that resonated with my style – they were always quite dated and traditional looking. As someone from London, I didn’t want to compromise my modesty, but I did want something I could wear with my Nikes and my jackets and everything. Finding middle ground was hard, so when I started my brand I knew off the bat that this is what I wanted to tap into – I really admire clothes that are about more than just looking pretty.

(My work also explores) the cultural perceptions of women’s clothing, too. We see vast differences between men’s and women’s garments, in the pockets for example. It says a lot about how we perceive women’s lifestyles compared to men’s. I wanted to create an abaya that reflected the modern Muslim woman that’s out and about and active, and is need of comfort and movement from her clothes. Streetwear was always a natural thing for me, even in terms of the designers that I look up to. It was never about couture – streetwear designers were the ones who spoke to my sense of style and that of a lot of young people around me.

Where do you find inspiration more generally?

Saeedah Haque: I’m inspired by other girls. It could be a small thing such as seeing a hijabi walk past me in an amazing outfit that would inspire me. Things in the community and the wider world, too. I try to say something through my clothes beyond just aesthetics – as an activist, everything I’m doing (with my brand) is a political statement. The fight existed long before me, and until that fight is over, my clothes will always be political as I try to take on these issues.

If you could have anyone wear your collection, who would it be?

Saeedah Haque: That’s a tough question. I love Gigi and Bella Hadid as they are unapologetic about their Palestinian roots. I would love to see them wear my abayas as they are not the stereotypical target market, but it could lead to more people embracing modest clothing.

What’s next for you? Where do you see yourself in the next few years, and how do you hope your brand will grow?

Saeedah Haque: I would love to widen this market and for it to not be a niche anymore. Modesty can be embraced by so many different types of people – both men and women. That’s why a lot of my pieces are gender neutral, I think modesty is for everyone. In fact, we already dress modestly without the label ‘Muslim style’ or ‘modest style’ label – just look at Billie Eilish, who dresses in oversized clothing. It’s not just for Muslim people, it’s for everyone. So it becoming a wider market would be amazing.