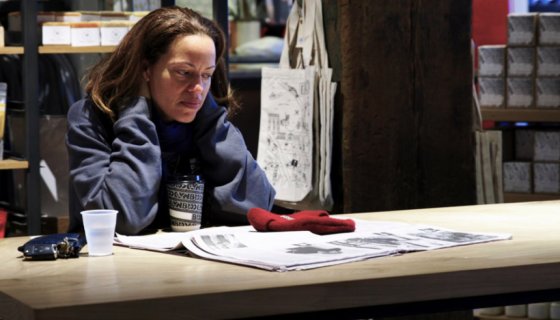 may have the documentary regarding the allegations against former Def Jam mogul , but the film did debut at the Sundance Film Festival as scheduled to a standing ovation.

On Saturday (Jan. 25) the documentary, On the Record, was premiered but not before causing a stir. According to the New York Times, creators set the tone for the film by placing a truck outside of the venue where the film was screened with a sign that read “Hold Sexual Abusers Accountable.”

After the screening, the film’s central figure, , along with two other women from the documentary, Sil Lai Abrams and Sherri Hines, went onstage to a standing ovation and took part in a Q&A along with the directors. The audience — which included the Netflix chairman and chief executive Reed Hastings, the CNN chief Jeff Zucker and the actresses Rosanna Arquette and Frances Fisher — was mostly silent during the screening; but after Dixon appeared on stage noting that the film serves as a wake up call to the plight of Black women in regards to ual assault, the crowd erupted.

The documentary follows Dixon as she weighs whether to take her ual abuse claims public. Dixon, a 48-year-old former music executive, claims that Simmons raped her in 1995 when she was working for him as a young executive. Simmons has denied all accusations of nonconsensual .

On the Record” also delves into the place black women have in the #MeToo movement and the racial dimensions of ual assault by discussing the culture at the time: misogyny in the music business, both in specifics when it came to hip-hop, and in general terms, pointing out that the rap genre didn’t invent the use of degrading images of women in its music videos.

#MeToo founder Tarana Burke is also a frequent voice, adding commentary about black women’s place in the movement, and their feelings of alienation. “Black women feel like they have to support black men,” she said. One audience member noted that the film, despite being about black women accusing a black man of rape, is directed by two white people.

“A lot of this is about power and ecosystems of power,” Dixon said after the screening. “And all of us have kept our stories to ourselves for decades, and there are people within that ecosystem who knew our stories.”

In addition to premiering at Sundance, the documentary also featured new music from . “Damnable Heresies” plays in full over the closing credits to the Kirby Dick and Amy Ziering-directed film.

“This previously unreleased track was specifically chosen by Ms. Hill to appear in the film,” a spokesperson for On the Record told EW, noting that Ms. Lauryn Hill also wrote the song.

While producers are still looking for distribution for the film it has been added to the Park City Utah Film festival and is scheduled to be screened there on Tuesday (Jan. 28) and Feb. 1.