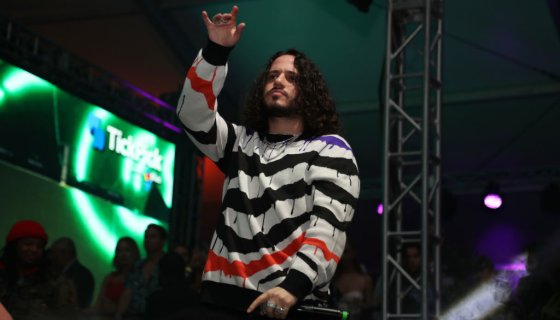 Rapper is no stranger to speaking his mind when it comes to Hip-Hop. During his latest interview with and ’s Brilliant Idiots podcast last week fans were ready to hear what he had to say next.

During the interview while promoting his latest project, Shake the Snow Globe, Russ took some time to speak on white people stealing from Black culture and relating to how it’s a problem in Hip Hop.

“If you’re white in Hip Hop you have to contribute to Black culture in some sort of fashion otherwise you are repeating history by coming into Black culture and using that as a medium to steal and profit for self,” he said.

While Russ didn’t specifically name at first, with a little prodding from petty expert Charlamagne, Russ jumped on the opportunity to use , but not before pointing out his own privilege as well—noting that a Black rapper wouldn’t sell out arenas in Portugal the way he does later in the interview.

“You can’t come into this from the vessel of hip-hop and use the clothes and the language and the music and then go off and start doing something white,” Russ said. “I mean, that’s a fair example because I do think that it’s an interesting thing to look at from that lens of where you come in with braids and golds to the point people are thinking you’re mixed and now, you know, you drink Bud Light and wear cowboy boots and stuff.”

Although his statement comes off a little harsh, to soften the blow Russ gave props to the “White Iverson” rapper but not without making sure that he still maintained his point.

”I think the caricature of how it came in compared to where it is now seems a little, it’s a little interesting,” Russ continued. “Certain things like that are fair critiques as far as like you came in and used Hip Hop because its the coolest genre and the coolest look and aesthetic. You used it to propel yourself to the forefront and then you reverted back to who you really were.”