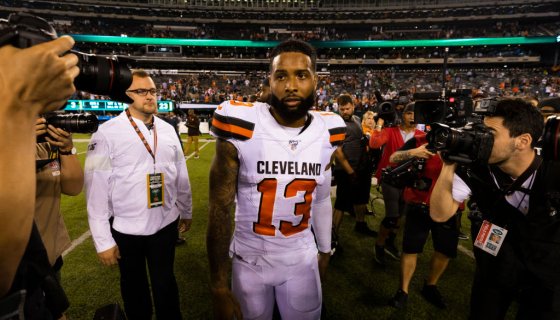 Even though every sports league is on hiatus moves are still being made in the background. is reportedly feeling in a ways and wants out of The North Coast.

Clutch Points is reporting that the star wide out is not happy with the recent rumors that the Cleveland Browns want to ship him out. Earlier this week chatter started circulating around the sports press circles speculating that the AFC North squad want to unload him and his pricey contract to the Minnesota Vikings. If that tea is indeed true the Vikes will aim to give up a second and fifth-round pick in the 2021 NFL draft to bring his talents to where Prince called home.

On a recent episode of The Herd Colin Cowherd explained that he has exclusively heard that isn’t feeling the vibes in Cleveland would welcome a chance to play for the Vikings. “He’s not gonna make a big deal. He’ll deny it. He wants to get along with everybody. … Let’s just say this: OBJ will not go public, [but] he knows Minnesota is a good place. He knows it’s a good fit” he shared.

In March 2019 the LSU alumni signed with Cleveland after launching his career with the New York Giants. But since originally suiting up in brown and orange rumors have followed him about this just being a pit stop on the way to a bigger bag. But in December 2019 he refuted the hearsay in an interview with Cleveland.com. “It’s done. It’s over with. I’m not going anywhere. I’ll be here. We’re going to figure this thing out. It’s just too special to leave.”