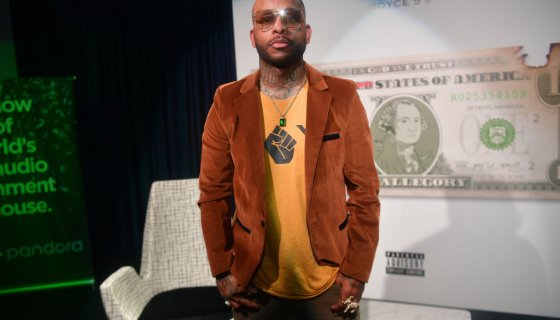 For over the past two decades, has positioned himself as one of Hip-Hop’s and that tradition continues with the release of his latest album. The Allegory is a 22-track affair that presents the Detroit wordsmith with an opportunity to showcase his musical chops beyond rhyming as he produced the entire project himself.

The album opens with “Mr. Grace” and serves as the intro with Nickel Nine in spoken word form speaking from the perspective of a wisened soul. This gives way to “Dope Man,” featuring vocalist Emanny and comedian Cedric The Entertainer, and the upbeat groove of the track isn’t the traditional boom-bamp we’ve heard Royce float over in times past.

Royce reconnects with his Prhyme partner DJ Premier and enlists the services of Oswin Benjamin for “On The Block,” and Grafh shows up for “I Play Forever.” The previously released “Overcomer” with Westside Gunn appears here, featuring a diss aimed toward Yelawolf and Kid Rock, while WSG’s brother Conway The Machine makes a stellar feature on “FUBU.” Completing the Griselda is “Upside Down” featuring Benny The Butcher and singer-songwriter Ashely Sorrell.

KXNG Crooked AKA Crooked I brought some of that Slaughterhouse heat on “Tricked” and Royce’s younger brother Kid Vishis comes through with the assist on “Thou Shall.” Royce’s Bad Meets Evil partner Eminem jumps in on the skit “Perspective” and other features include CyHi The Prynce, White Gold, Sy Ari da Kid, G Perico, and Vince Staples round out the features.

The Allegory adds to Royce Da 5’9’s impressive discography and perhaps the most impressive aspect of the album is Nickel’s work on the boards. If he ever decides to put down the pen and pad, Royce would become an in-demand producer for certain.

Twitter seems to agree that Royce truly delivered with this latest set of songs that are loaded with substance and focus that fans have been accustomed to since Royce dropped his stellar Layers album. We’ve got thost reactions below.

54 seconds into #TheAllegory and I already have chills. @Royceda59 hasn't even said anything yet and I brought it back 3 times. This is what new music is supposed to do.

One listen to The Allegory and it’s clear @Royceda59 has acquired the final Infinity Stone. 😳😳😳 pic.twitter.com/A0jSDXvssY

This is for everybody who just heard @royceda59's new lp, "THE ALLEGORY." pic.twitter.com/9tKrZ562Ze

Lupe Fiasco, Eminem & Royce Da 5’9 are top 3 don’t @ me. This Royce album “The Allegory” is Just… just… masterful. Congratulations @Royceda59 you went above and beyond. pic.twitter.com/IY4pMSxOlh

“They say you are what you eat but I never ate GOAT.” #TheAllegory pic.twitter.com/yLo7EPxMAQ

Allegory just dropped. Played…re-played x4 times so far.
Amazing project… beats, lyrics, collabs and most important the message.#TheAllegory stands for me as a classic album 🔥🔥🔥
Thank you @Royceda59

@Royceda59 don’t even make albums for music, THESE ARE LESSONS FOR LIFE! Love u big bro!!! You just keep growing and it’s so inspiring #Allegory #takemetoschool https://t.co/rPVkSO5nUL

That other music that dropped last night was cute but this what we world trappn to today cuh #TheAllegory pic.twitter.com/f5uilrPA91

Look, @Royceda59 is a GOAT and he deserves his flowers now. Only a few tracks in and I’m floored at his growth as an emcee… can’t wait to really get into this album. #TheAllegory

The fact that he keeps evolving as an Artist makes him by far the most underrated Rapper of the last 20 years. Besides his incredible lyricism & amazing technique, now he proves himself as a producer. This album IS already up for AOTY no doubt. Thank You, @Royceda59#TheAllegory https://t.co/fhVFkTNf0A