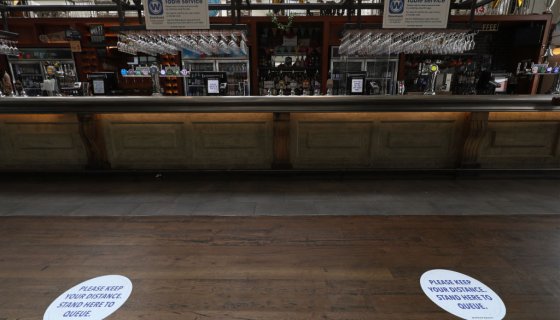 Rona has people on edge and understandably so. One white man learned the hard way not to invade the space of a Black man and his girlfriend.

Another day, some more white folks have lost their minds. A video is making its rounds on social media highlighting a bar brawl that took place on Saturday (Jun.27) at an Arkansas bar that started over social distancing, according to witnesses.

According to a police report, a Black woman wearing a mask is visibly upset, issued some stern warnings to a white couple who she claimed was sitting entirely too close to them. According to an employee at the establishment, was “purposely coughing on other customers.” A white man wearing the official uniform of MAGA fans,  a ‘USA’ T-shirt, also was antagonizing the Black woman by inching close to her.

The argument went from just words to actions when the white man shifted his attention to the woman’s Black boyfriend, who was just chilling. The woman’s boyfriend grabbed a bottle after Ken put his hands on him and proceeded to smash it over his head. A brawl ensued, but no one involved in the incident pressed charges.

Add to this long list of white folks gone wild during the coronavirus pandemic. We just hope they watch these videos so they can see they can get these hands, feet, and a bottle swiftly if they violate. You can watch the Rona Rumble go down in the clip below.

WATCH: Saturday night dinner at Saltgrass Steakhouse in Little Rock turned violent after one customer was upset about the lack of social distancing.
Hear from someone who saw it all go down tonight on @KARK4News and @FOX16News
Warning: profanity is used. pic.twitter.com/wsez397453