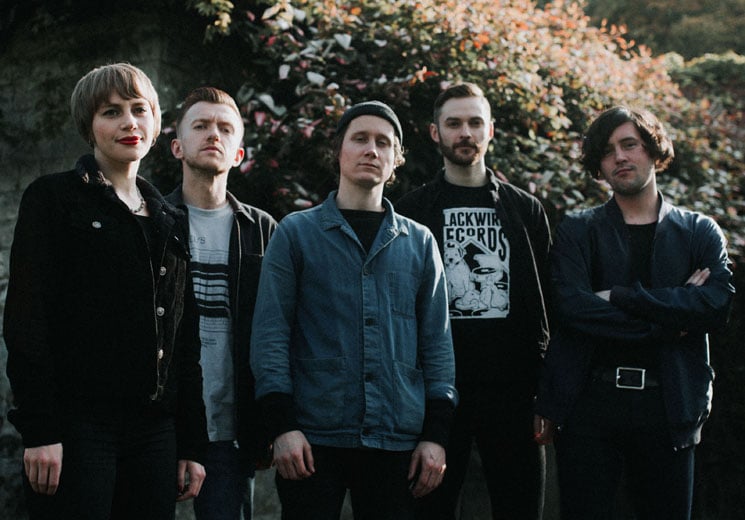 While their sound could generally be defined as mathcore, it’s extremely difficult to define what English band Rolo Tomassi play, since they are constantly shifting gears. As they release their fifth record, Time Will Die And Love Will Bury It, keyboardist and vocalist James Spence reflects on how much the band has evolved since their debut, Hysterics. Their sound has matured, their lineup has almost entirely changed and in Spence’s opinion, the band who released Hysterics are not the same band releasing Time Will Die And Love Will Bury It.

“It almost feels like a separate life. I think certainly with having lineup changes in the last six or seven years, and the kind memories you have attached to certain records and certain periods touring, it does feel like two separate bands almost,” says Spence. “For us, with fourth album] Grievances, we really set everything and that’s almost like a debut for the current incarnation the band. This record definitely has that kind anticipation that a sophomore record usually has for another band.”

Spence and his sister Eva, the only remaining original members, have been performing in bands together since before forming Rolo Tomassi, and have been helping each other mature as musicians for their entire careers. When they started the band as teenagers, Eva stepped up from her role as keyboardist since they couldn’t find an aggressive vocalist, leading the siblings to practice their screams and growls together in their parent’s car while blaring music, because they were initially shy about their skills.

“We’ve worked together for 17 years in different bands and we’ve always made music together, so I’m just delighted that we still get to do it and that we can get on. That we’re able to influence each other and share this amazing thing and be on top the world is something that I’m really grateful for,” says Spence.

The band went through three lineup shifts between completing their third record and releasing Grievances, with the addition guitarist Chris Cayford, bassist Nathan Fairweather and drummer Tom Pitts. They revamped their sound and went for a much darker tone than the mix math rock, hardcore and videogame-like synths they had become known for.

“For the last record, we just had a lineup change, so we were writing an album with a new drummer and that can make things, not necessarily difficult, but fresh. You’re learning how to write music with new people, which can be challenging, and I feel like this time around we were a lot more set in the lineup in what everyone could bring to the table creatively,” says Spence.

Despite Time Will Die And Love Will Bury It carrying on many the darker elements Grievances, it is a much more hopeful-sounding record. Opening track “Aftermath” shows not only the band’s embracing melody, but demonstrates vast experimentation on the record. The track is a melodic pop-rock song unlike anything they’ve ever done before. “It’s a perfect introduction to a record that has a considerably more grand mechanic to it than some previous albums,” says Spence.

A huge transformation on Grievances, and even more so with Time Will Die And Love Will Bury It, is the synth sounds that Spence used. While previous records featured 8-bit videogame-like synthesizers, Spence shifted towards more organic piano sounds as his taste shifted.

“As I’m growing older and starting to listen to some different music and taking a different interest in particular types synthesizers and the more organic piano sounds, I just wanted to bring that influence into what I’m writing. We were always a band that’s drawn from the influences that we’re listening to; it’s not like a heritage thing where we’re like the first album sounded like this, so we have to continue to be the same.”

Time Will Die And Love Will Bury It is out now on Holy Roar Records.