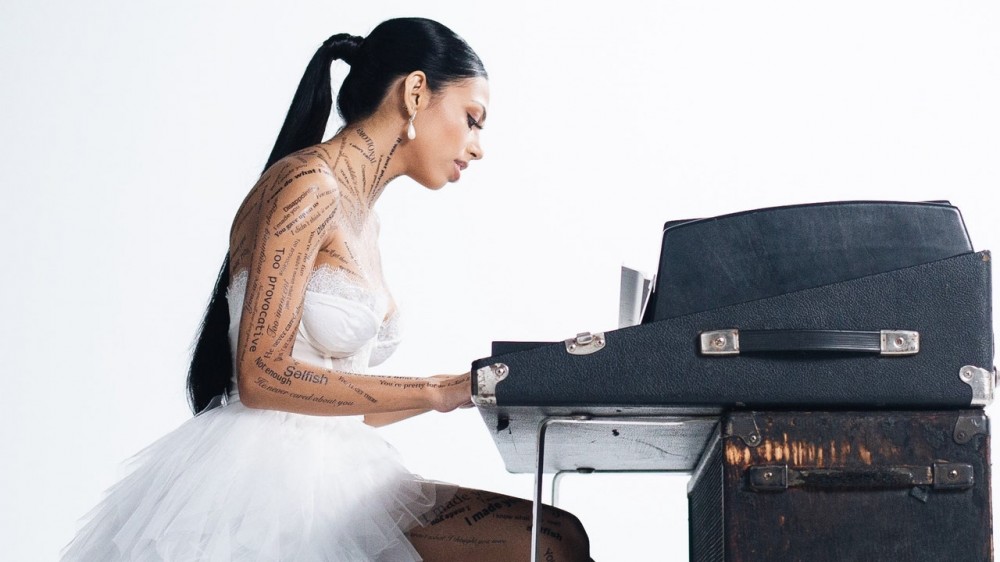 The average music video in 2021 is an explosion of bright colors, outfit changes, and provocative imagery. The glut of “in your face” clips makes sense, given the attention that artists compete for online, but it as a result, a less-is-more approach can stand out even more. The soulful music video for ‘Grafitti’ keeps things simple, focusing on a girl, her piano, and a one-of-a-kind voice. The young woman in question is Saleka, the 24-year-old singer-songwriter from Philadelphia whose experimental R&B sound calls to mind the Neo-soul movement of the late ’90s. A classical pianist since childhood, Saleka has been immersed in music for most of her life. Initially anxious about sharing her talents with an audience, performance has become a vital part of her self expression. “As I got older, it became a more personal connection,” she shared via email. “I would find myself enthralled by the emotion of a certain chord progression or melody.”

The daughter of The Sixth Sense and Split auteur, M. Night Shyamalan and psychologist, Bhavna Vaswani, Saleka grew up in a family where all forms of expression were valued. “My sisters and I grew up on film sets, witnessing all different types of art be created,” she says. “We were raised with a profound respect for art and creativity and were constantly aware of the intense discipline and passion it would require.”

That dedication comes through in her music, and the work of her equally-gifted siblings with whom she collaborates. Little sis Ishana Night Shyamalan, directed the video for ‘Graffiti’ and took the creative lead on two more Saleka videos. Their bond makes the otherwise stressful process of distilling a song down to a visual simpler. “We are genuinely best friends and, of course, have known each other our whole lives. We know each other’s insecurities and artistic tastes and the pain we’ve been through,” says Saleka. “That allows for a level of depth in communication that would be very hard to obtain otherwise.” Even before filming began, Ishana was actively involved. “She saw me as I wrote and created the whole album; she often heard the very first drafts of these songs and talked to me about whatever was going on at the time that inspired me to write them,” says Saleka. “Her understanding of the music is deep and real. Besides being my sister, I also have to point out my gratitude for having another woman of color and another South Asian direct all these videos. That in itself is a rare occurrence, and I feel fortunate. ”

‘Graffiti’ began as the musician’s attempt to process a breakup. “I wanted to describe the feeling of not being able to move on from a past relationship, of feeling defined by someone else,” says Saleka. Capturing the doubts, misconceptions, and pain that can stem from a bad romance, it handles an intense subject with care. “The lyrics don’t portray this as an outright negative thing because I had romanticized these emotional shackles as a form of connection; they gave me comfort and structure,” explains Saleka. “It is often not the most obvious insults that hurt us, but the subtle things said by the people we love the most that end up defining our world and what we believe we can become.”

Equally potent was the video’s body art symbolism. Set against white space as she plays the piano, Saleka’s body is eventually covered in words representing insecurities. “The art of graffiti was started as a way of tagging, claiming space, marking territory. It is a beautiful and powerful tool,” says Saleka. “The words that we say to others are as permanent and impactful as if they were spray-painted on concrete to be seen by every passerby.”

Connecting this to a fashion statement involved a little trial and error. Initially, the plan was to let the words take center stage, keeping the style minimal and completely understated. But then an unforgettable dress came along. The lacy all-white creation by Caroline Duncan was beautiful, but it also alluded to bridal conventions and the standards of purity often imposed on women. “It was surreal—I felt like I was dressed for my wedding, but instead, I was all alone singing a song about pain and heartbreak,” says Saleka. “Wearing it made me feel beautiful, but also forced me to grapple with certain insecurities about my body and my relationship to womanhood. I suddenly felt not feminine enough, unsure whether I was worthy enough to be wearing something so pristine and dramatic. Self- conscious of all the attention. The reason I felt all those insecurities, though, was exactly why we made this video.”

The filming process has also helped open her eyes to the power of fashion. “Making music videos helped me break out of some of my style insecurities and gave me an outlet to become more excited about fashion and experiment with different facets of myself through clothing,” says Saleka. “I got to emphasize tastes of mine that I would usually try to keep tame: bold colors and shoulder pads, sensual slip dresses, dramatic feminine gowns. When I was younger, I rejected my femininity and things that were overtly “girly” for fear of being seen as weak or dismissed as a diva. I would always dress to hide the parts of my body I was insecure about, instead of being inspired by a certain cut or a fabric. Now I am starting to transition out of that mindset.”

Through art like ‘Graffiti,’ Saleka hopes to inspire young women to define themselves, rather than adhering to what society or the men in their lives tell them they should be. With an album forthcoming including a track contributed to season 2 of the Apple+ series, Servant, her songs and their  “meditation on the power of words”  seem sure to reach the intended audience. “We have to be cautious in what we take in and the words we put out,” says Saleka. “We should even question the semantics of the society we were raised in. Just because we are used to saying or hearing a phrase doesn’t mean it is ok. Words carry weight, context, and often deep historical connotations and repercussions. They can be used to unite or divide, to liberate or subjugate. If we are aware of that power and don’t take it for granted, we can use it for good.”