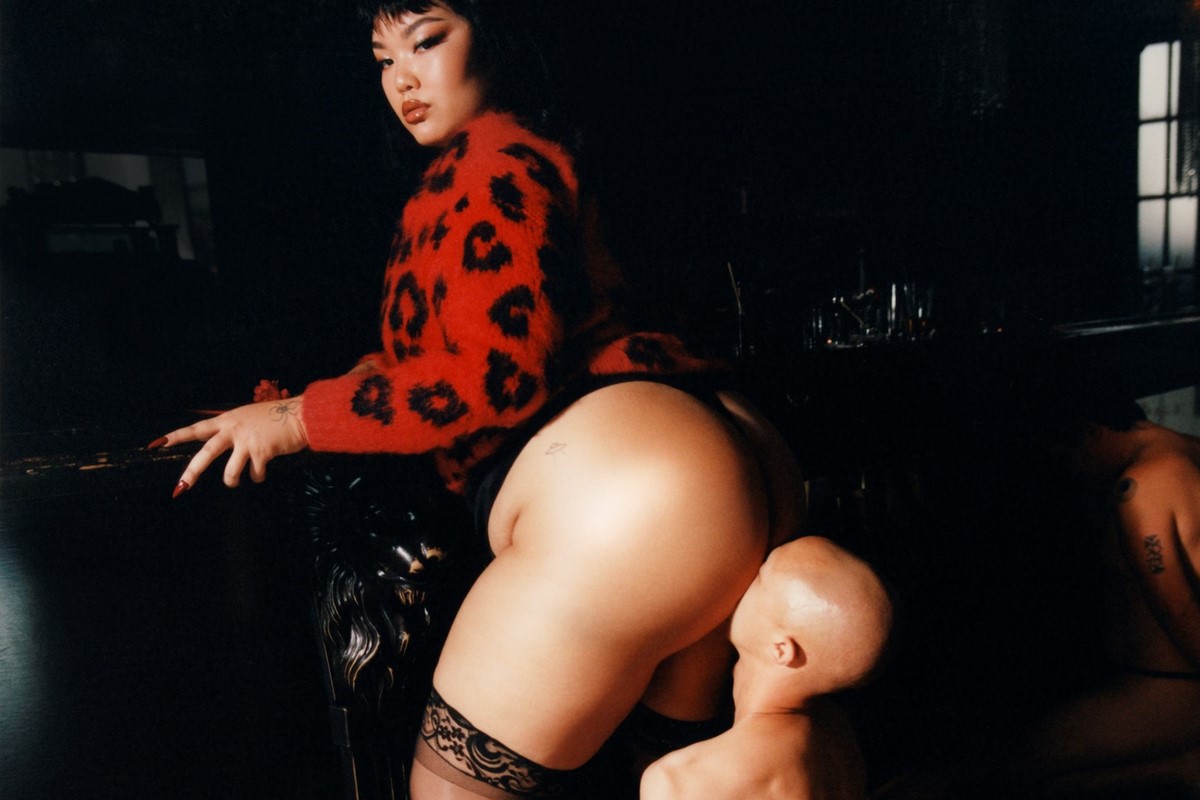 Chances are, if you’ve ever seen one of Namio Harukawa’s works, the image is now permanently etched in your mind’s eye.

The subversive Japanese artist was known for his radical sketches depicting voluptuous women dominating far smaller, subservient men – their ample breasts and buttocks swallowing up these diminutive thrill-seekers as they sit on their faces or clasp their heads tightly between their thighs. Defiant in their disregard for conventional beauty ideals, his images are a celebration of the divine feminine power and beauty fat women – and particularly fat Asian women – hold. To label them simply ‘fetishistic’, as they so often are, is to do them a total disservice.

While Harakuwa passed away last year, his influence lives on in a new generation of creatives. Landing this week comes a new fashion editorial steered by photographer Rémi Lamandé, which draws inspiration from some of his most recognisable works. Featuring rising curve model Lovisa Lager, the images see Lager hold one man, stripped to his underwear, in a headlock, while in another, she flees the scene wearing black lingerie as two men lie in a heap on the floor.

A further photograph, perhaps the most provocative of the series, depicts the model leaning against a bar as a kneeling subservient buries his face in her bum. With Lamandé behind the camera, stylist and Solange-collaborator Kyle Luu, hair stylist Evanie Frausto, and make-up artist Raisa Flowers made up the team bringing the shoot to life.

“I think the first time I came across (Namio Harakuwa’s) images was in the bathroom of a club in Paris,” explains Lamandé. “Kyle was often posting his images and we’d been talking about doing a project around this idea for a while. What really attracted us to his work is the raw power and peaceful confidence of these girls. It’s a very different angle from the way Asian girls tend to be portrayed and stereotyped. His women are in charge – they go on about their lives and their sexuality doesn’t define them.”

With COVID restrictions allowing for only the smallest of shoots to take place, the team worked from a tiny set, which served to imbue the final photographs with a deep sense of intimacy. “Kyle and Lovisa were already good friends, and we were all very happy to be creating these images – it was a case of friends working together and trusting each other,” Lamandé adds.

With the series getting its debut on Instagram yesterday, the social media platform was quick to remove images it deemed inappropriate thanks to the sexual content depicted in them. “It’s really frustrating,” says Lamandé. “We did expect a couple of them to be taken down to be honest – especially the one where Lovisa is using a boy’s face as a human stool – but I was very surprised that some of the less sexual images were still getting banned.”

With Instagram facing criticism for removing images of larger bodies while allowing similar posts featuring smaller women to stay up, the series once again highlights the conversation around censorship and its parameters on the sharing platform. For now, however, Lamandé and his team just want us to drink in the series’ “sexual confidence, power, and happiness”. “These are happy pictures,” he concludes.

Check them out in the gallery above, and see where the inspiration came from below.