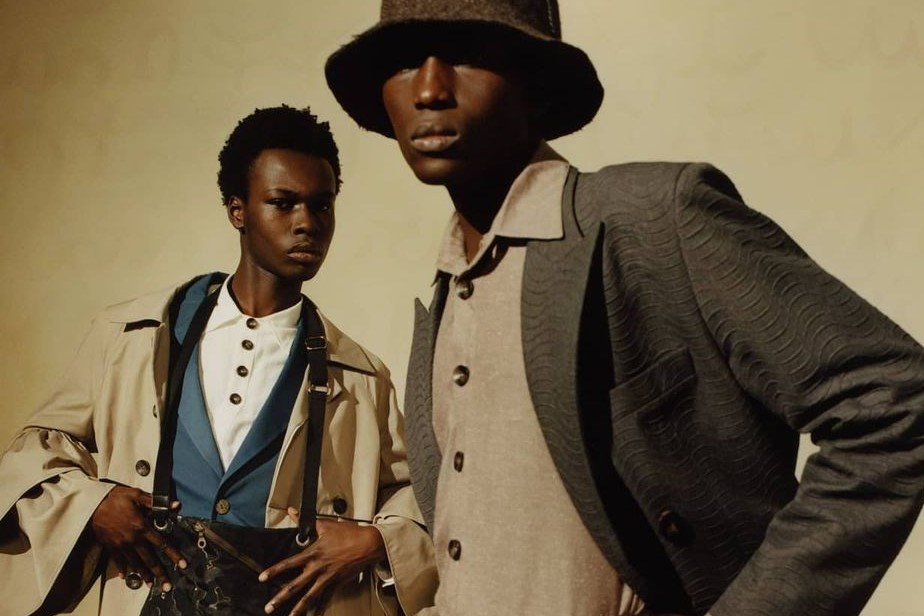 Foday Dumbaya first became aware of fashion at an early age. “In Sierra Leone, when I was young, my dad was in the police force and always dressed immaculately. He had this great authoritarian military uniform,” the East London-based designer, who was raised between Sierra Leone, Cyprus, and London reveals. “My mother loves to dress well too. She’s more extravagant and to this day wears traditional African dress – coordinating colours, a headscarf, it’s a whole look,” he adds. When it came to his parents actually allowing him to go into fashion however, things got a whole lot more tricky. “It wasn’t always on the table in my African home. My parents were determined I chose a more stable career – as immigrants themselves, they recognised we faced an uphill battle as it was.”

Instead of heading to fashion school, Dumbaya studied information design at university, going deep on the ways in which humans interact with computer interfaces. After an internship at tech powerhouse Siemens, he dipped his toe into fashion for the first time at Nike, where he created bespoke designs for the sportswear giant. “I’m largely self-taught but fashion isn’t so different (from information design),” he says. “I create stories within fashion that humans respond to.” After his stint at Nike, he laid the foundations for his own label, LABRUM, with the intention of exploring both West African and British heritage, and bridging the gap between the two.

Past collections have seen Dumbaya look to Sierra Leonean capital Freetown, his grandmother, and the West African diaspora for inspiration, with classic tailored suits, clean indigo denim, and slick, functional sportswear-indebted pieces sitting alongside his own takes on the agbada and other traditional silhouettes. “A lot of our pieces are an amalgamation of cultures,” he explains. “We have British tailoring in the shirt, with the addition of ruffle sleeves, which is more traditionally West African attire.”

More recently, as part of his AW21 collection at London Fashion Week, LABRUM paid tribute to “the heroes of St. Giles Blackbirds” – a community of sailors, soldiers, and former slaves that came to England from Africa in the late 1700s and ended up living in poverty, shunned by society. “We wanted to tell the story of a group of people that were downtrodden and went against the efforts made to forget them,” Dumbaya explains. “It was important that we told it now, because it’s a story of resilience and migration, which feels very poignant right now.”

Inspired by the stories of figures including writer and abolitionist Olaudah Equiano, who came to the UK after buying his freedom and fought for the abolishment of slavery, Dumbaya reworked and reimagined historic dress for 2021, enlisting Dazed editor-in-chief and longtime collaborator Ib Kamara to bring the offering to life on the runway. This saw trenches with dramatic ruffled panels matched with louche, wide-legged trousers, structured coats layered over tailored, printed suits, and new iterations of his signature balloon-sleeved Mamie Bakie shirt – named after his grandmother – all on the line-up for the new season, with 80 per cent of the offering crafted from offcuts and salvaged fabric.

For Dumbaya, it’s not just about the clothes, though – fostering and supporting a sense of community, as well as empowering a new generation of creatives, is high on the agenda, too. Having long worked with Hackney’s Wickers Charity, which supports and uplifts disadvantaged youths in Hackney, he also founded Sierra Leone running club Labrum Athletic. In addition to donating funds and equipment to the group, he also stepped in to create the Sierra Leone Olympics kit when some of the club’s members were chosen to represent the country in the postponed 2020 games.

Working in partnership with Converse, the designer is also attempting to open up the fashion industry to a wider, more diverse demographic. Having first linked up for a creative project and collaborative runway footwear, Dumbaya’s relationship with the legendary label has evolved into something a lot more expansive. As part of Converse’s All Star programme, LABRUM has been able to access mentorship and funding that has allowed Dumbaya to grow his brand and community significantly.

With many brands – both emerging and, more dismally, established – relying on low or unpaid interns to support their businesses, those from lower economic have historically been locked out of fashion. In a bid to combat this, Converse has begun funding paid placements with its All Star designers – allowing growing businesses to thrive and young talent who otherwise might not have been able to to get their foot in the door to gain experience, knowledge, and guidance. Ahead of the AW21 season, LABRUM was one of the labels that benefit from the initiative, with a number of interns and a studio manager joining its fold.

“(The interns) were an incredible support,” says Dumbaya. “Each of them brings different experiences and energy to the team, and I really valued their input. We’re developing a platform where there is knowledge sharing between West Africa and the West – and especially London. We want the people interning to share their knowledge too.” With Dumbaya intent on telling new stories and merging the borders of West Africa and Britain as the label grows, he’s determined to also keep the door open for the creative new gen. ”Nurturing talent is so important to me. LABRUM will continue to create and support communities linking back to Sierra Leone and London, as this is so much more important than simply designing clothes. If we’ve learnt anything from the pandemic, it’s that we all need to think about each other more.”