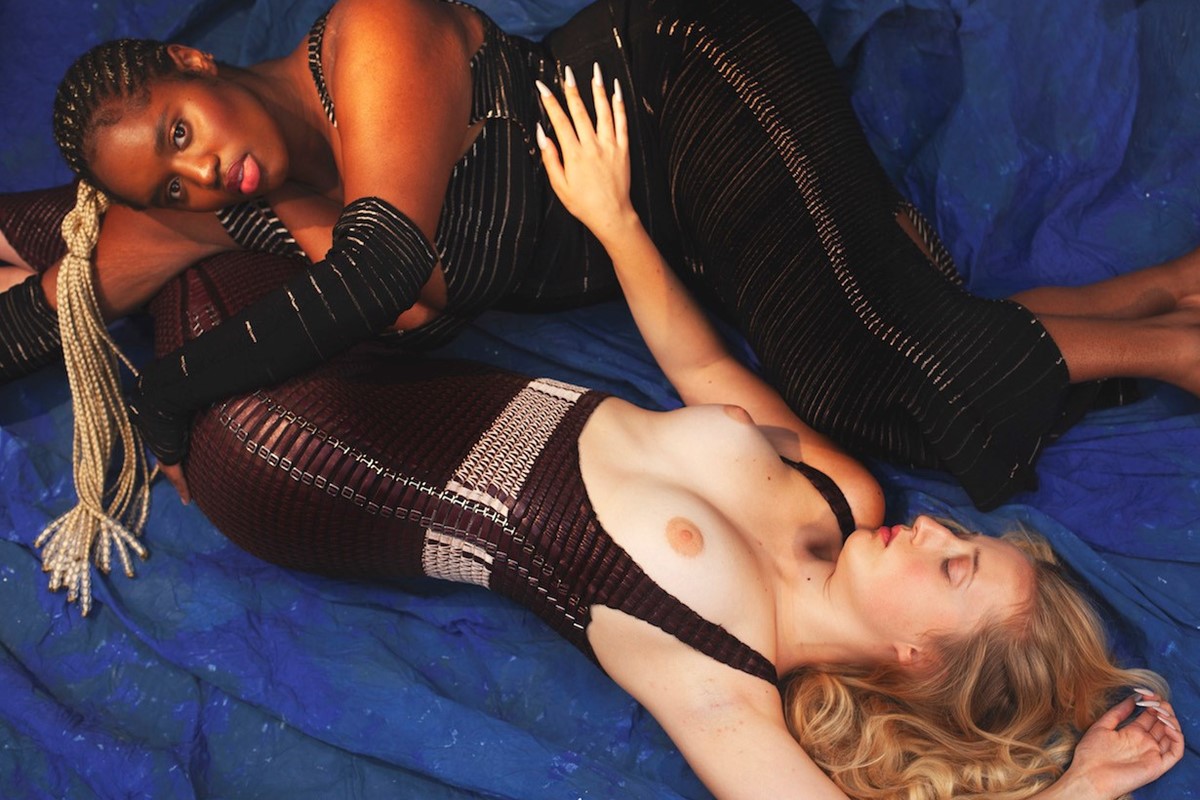 Crafting slinky knitwear with subversive peekaboo cut-outs, the RCA grad finds intrigue in designing clothes you don’t need to remove to have sex

As Victoria and her long-kept Secret slink off into the night, dragging her archaic idea of what constitutes a fantasy behind her (namely no fat or trans womxn), the stage is set for a new gen of lingerie designers to land on the scene and shake things up. Shunning the male gaze and exploring the nuances of the body beyond just ‘sexiness’, the likes of Michaela Stark and MARIEYAT are carving out a space for themselves with their thoughtful and thought-provoking underwear.

Debuting her SS21 offering as part of London Fashion Week’s online proceedings, Jaz teamed up with photographer Scarlett Casciello on an intimate new portrait series. Wearing pieces from Doves a Tender Drip of the Finest Saccharine Sanguinary, a diverse line-up of models are seen in the gallery above sprawling out across each other or gazing intently into the camera. Alongside this, here, Jaz talks making clothes for womxn she has a crush on, unpacking her relationship with the male gaze, and aiming a big ‘fuck you’ in the direction of social media censorship.

Hey Ellis! First of all, how did you come to design lingerie?

Ellis Jaz: I started with a couple of lingerie pieces in my MA work – I was designing garments with lots of cut-outs and flashes of body parts. I’ve been very intrigued by the idea of designing clothes that you can have sex whilst wearing. I then started using underwear pieces to validate the garments and make them a little more functional, wearable, and adaptable.

Can you tell me a little about your motives when it comes to subverting what lingerie can be?

Ellis Jaz: Actually, things started more about subverting the idea of what knitwear can be. I studied textiles at BA and then did an MA in knitwear. I felt an awkwardness about moving from textiles into fashion where the word craft always felt like an insult – whereas in my mind ‘well-crafted’ was the highest praise.

Grappling with that I figured that fucking with associations of the well-crafted and what stereotypical knitwear was would be a route to figure things out, from slinky-stretchy viscose dresses in fine knits to underwear from the same materials. Finding a way to collide glamour with comfort. I’ve had such awkward moments wearing brand-new, completely stiff lingerie and trying to fake that this made me feel amazing. I don’t think you have to be rigid to feel gorgeous in underwear.

Who do you have in mind when you are designing?

Ellis Jaz: I’ve gone through stages of really having specific womxn in mind – mostly womxn I’ve had crushes on. I go through this process of making them a ‘gift’ that I actually never end up giving away, because if I did there wouldn’t be any work to show. And then working from these emotion-based beginnings to build a collection off the details. I do try and fall in love with the person I have in mind when I’m designing as I think that’s the only way I can do it. Make something as intricate as I can with a lot of love and devotion all over it.

You modelled your MA collection yourself at your graduate show last year. Tell me about your relationship with your own body? Was it important to you that you were the one to model it?

It felt as though it could be dangerous to bring other people into the visuals too soon without feeling concrete in my thoughts. And the ricochet of that was that I had this period of photographing myself continuously and slowly my body became as standard in my mind as a mannequin. At this point, I feel quite un-self-conscious in my body which is largely due to that time. I did eventually find a perfect model to work with who also modelled in my final show, but I had to be patient and find the right person who connected with what I was working on.

All of your imagery feels extremely intimate and personal. Tell me a little about the people you choose to model the lingerie now…

Ellis Jaz: I try to work with friends or at the very least people I have a personal connection with – people included in my imagery must be enthusiastic to be there as the photographs do tend to be very intimate. I photograph a lot myself and, in those instances, the best photos tend to happen when someone has reached out to me and said they would like to be involved. With the aestheticism of the garments and photography I don’t feel restricted with what the models can look like.

Tell me about your project with Scarlett – what drew you two together?

Ellis Jaz: I first approached Scarlett after seeing a gorgeous series of self-portraits she had taken over lockdown. Alongside them, she described her feelings around working with models as a photographer often photographing nude womxn. I loved that she felt it was important to take imagery of herself in the same way as she works with other people. I related to the notion of encouraging confidence and self-empowerment in other womxn and that being completely worthless unless you apply it to yourself. I think those working with image, as photographers and also designers do, have to take a moment to reflect upon what their relationship with their own image is. Especially when working around intimate themes of eroticism and sexuality to make sure that you work from an empathetic place.

How do you hope to see lingerie develop and change in the coming years?

Ellis Jaz: Lingerie has been one of the first areas of fashion to embrace a variety in representation. It houses the boldest self-empowerment in image and design as well as the most restrictive and gross. I remember a year ago seeing an Instagram post from Agent Provocateur with one of their only models over a size 10 and the disgusted reaction of so many people in the comments. It was so jarring for me to see this when lingerie of another kind had started to feel like a place of fairly true inclusivity and celebration of an honest body.

What reaction do your own posts receive on social media? Have you been censored by Instagram for instance?

Ellis Jaz: I’ve had an account deleted and many posts removed. I seem to be on whatever the Instagram blacklist is where I will share someone else’s post to my story and mine will be removed whilst the original stays up… the workings of that app are so bizarre. And it does get into your head. You can rationalise it away but the gut feeling of having work that you are proud of being removed and then to feel that there is something in your imagery that people shouldn’t have to see still stings. It’s sad to always have to find ways to censor a body in a beautiful way when that is completely conflicting with the aims of my work.

How do you see your own practice developing?

Ellis Jaz: With knit there is always this technical striving to move on to the next construction that will make your brain fall apart.

Who would you most like to see in your lingerie?

Ellis Jaz: All of the womxn being crushed down by social media censorship and feeling devalued are the ones I want in my clothes.

How have you adjusted to creating under lockdown?

Ellis Jaz: I have always worked in a very solitary way so things haven’t changed all that much. Each piece is made by my own hands on manual knitting machines – with some pieces taking three or four weeks to make. It’s slow as hell and frustrating but beautiful – and for the time being it’s the only option I have.

What’s next for you?

Ellis Jaz: I hope to become a lot more explicit with my work. I’m putting a lot of energy into finding routes beyond social media to get my work out to people, which, again, is difficult given the realities of life at the moment. A place that censors this heavily just isn’t a safe place to be. Yeah – a bigger fuck you to censorship is what’s next for me.