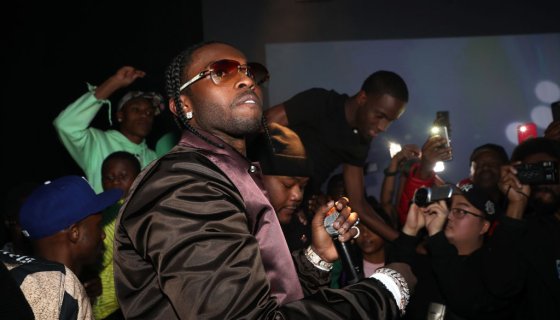 was on the cusp of superstardom after introducing American ears to the booming UK Drill sound, but his life was tragically cut short . Today (July 3), the Brooklyn rapper’s posthumous studio album debut Shoot For The Stars Aim For The Moon is here and fans on Twitter are sharing their reviews.

With the guiding hand of Steven Victor and Curtis “50 Cent” Jackson, Shoot For The Stars Aim For The Moon manages to capture Pop Smoke’s massive microphone presence and bone-chilling delivery atop top-tier production from longtime collaborator 808Melo, CashMoneyAP, WondaGurl, Mustard, Buddah Bless, and others.

The album is heavy on features with Quavos of the Migos featured on three tracks, Tyga, Lil Baby, DaBaby, Swae Lee, Rowdy Rebel, and 50 Cent as well among others. Across 19 tracks, the promise of Pop Smoke and his hit-making ability is apparent thus making his passing tougher to stomach.

On Twitter, fans are chiming in in real-time as the morning rolls on and as folks digest the album in full. We’ve got those reactions listed out below.

I don’t want no one saying Pop Smoke always sound the same. This man can sing his ass off pic.twitter.com/IyDEPebNyV

pop smokes producers adding “dior” at the end of the new album like😂😂😂😂 pic.twitter.com/wfhz7SjxFT

Me and my homies when we catch a nigga using a song off pop smoke album on a tik tok pic.twitter.com/rgM63IobUY

Today is Pop smoke day, so if u see me posting alotta of his shit don’t get annoyed just mind yo business
ALBUM OUTTTTT NOWWW🥺‼️ pic.twitter.com/Ov6v2iCH3x

That Pop Smoke album was sensational but knowing that was his last one…….. pic.twitter.com/1r4HDlmQYm

Pop smoke: “God gave me a lot in some months, but it could go in a second” pic.twitter.com/ylLCzPpDas

Pop Smoke, Lil Baby and Da baby on “For the night” pic.twitter.com/KRx4FizKIU

Me trying to enjoy Dior at the end of Pop Smokes new album pic.twitter.com/riKUcDFeoB

when you realize this is gonna be Pop Smoke’s last album ever… pic.twitter.com/3g9QzxlcBk

Anybody that talks bad about Pop smoke’s album pic.twitter.com/RA3BIUI4CZ