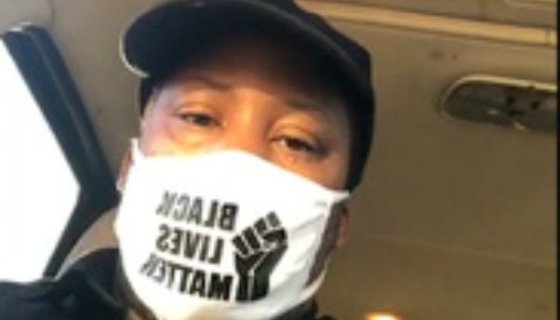 Denzel Skinner was attempting to clock in for work at a location in Youngstown, Ohio but was fired for expressing his support for the movement a mask. With a now-viral video of the encounter in question, many on Twitter are tossing their crunchwraps and meximelts into the garbage can.

Skinner posted a video to Facebook on June 8 that highlighted the exchange that ended with him being sent home over the mask. Skinner, in additional posts, said he worked at the Taco Bell location for eight years, devoting himself to the job

In a separate post, Skinner shared that he worked at the Taco Bell location for eight years, devoting himself to the job despite at one point have to rely on public transportation and the like.

“I put in 8 years at that place countless nights dealing with all type of ppl walked home caught the bus almost whatever i they asked me to do and for me not to be able to wear my #BLACKLIVESMATTER Mask is crazy to me i had so much respect for my boss and for her to say I’m done because of my mask and what i stand for and believe in is ridiculous that to me all because of “ politics “ I am gone always stand for what right and what i believe in,” Skinner said, also on June 8.

Skinner continued to show receipts on his Facebook page, stating that in no way did Taco Bell’s policy explicitly state he couldn’t wear a mask adorned with the Black Lives Matter slogan. A peaceful protest was organized by Skinner and several others, and the group gathered outside the Taco Bell location at 3551 Belmont.

On Twitter, a video of the exchange of when Skinner was effectively let go has been making the rounds thus sparking the current trend. We’ve collected some responses from Twitter below.

Thread: Taco Bell said Denzel Skinner’s Black Lives Matter mask was not allowed and fired him for not taking it off. #RIPTacoBell started to trend as a result. pic.twitter.com/2iql7PkBZo
https://t.co/2iql7PkBZo

Some local media were out filming the protest as the protesters continued toward the Taco Bell. #RIPTacoBell pic.twitter.com/1gTalI5coM

The protesters stopped across from the Taco Bell and continued protesting.

So wearing a #BlackLivesMatter mask that assets your humanity can get you fired from Taco Bell. In other news, this was the San Antonio Police Dept. in MAGA hats in 2016. #RIPTacoBell pic.twitter.com/yrkEfPldyx

I can completely emphasize with the young man at Taco Bell. As an operating room nurse I was told by my managers that I couldn’t wear this mask at @BonSecours so I left as well. Stand for something or fall for anything ✊🏽. #RIPTacoBell pic.twitter.com/7uwvWEUeDV

So @tacobell y’all tweeted this on June 2nd & today an employee was fired for wearing a #BlackLivesMatter mask becuz it goes against company policy? Explain. #RIPTacoBell pic.twitter.com/ynYOk4F4gb

Oh no how will I live without my bagged warm water meat #RIPTacoBell pic.twitter.com/TZNPEPQ50M

I guarantee that Taco Bell wouldn’t have fired someone who wore a “Make America Great Again,” mask. Why is it so hard for Republican to just say “Black Lives Matter.” It’s almost as if they feel they can be both a Republican and a non-racist at the same time. #riptacobell

Now that taco bell is canceled, the number of people sh*tting themselves will greatly decline. Not to forget toilet paper use…
Adieu tacobell. You shall not be missed.😌
#RIPTacoBell pic.twitter.com/dnLwge4ojF

Businesses need to open their eyes and realize we're at critical mass with social tension. Now is not the time to show their asses and fire employees for being aware and awake. If they don't support their workers, the masses won't support their bottom line. #RIPTacoBell