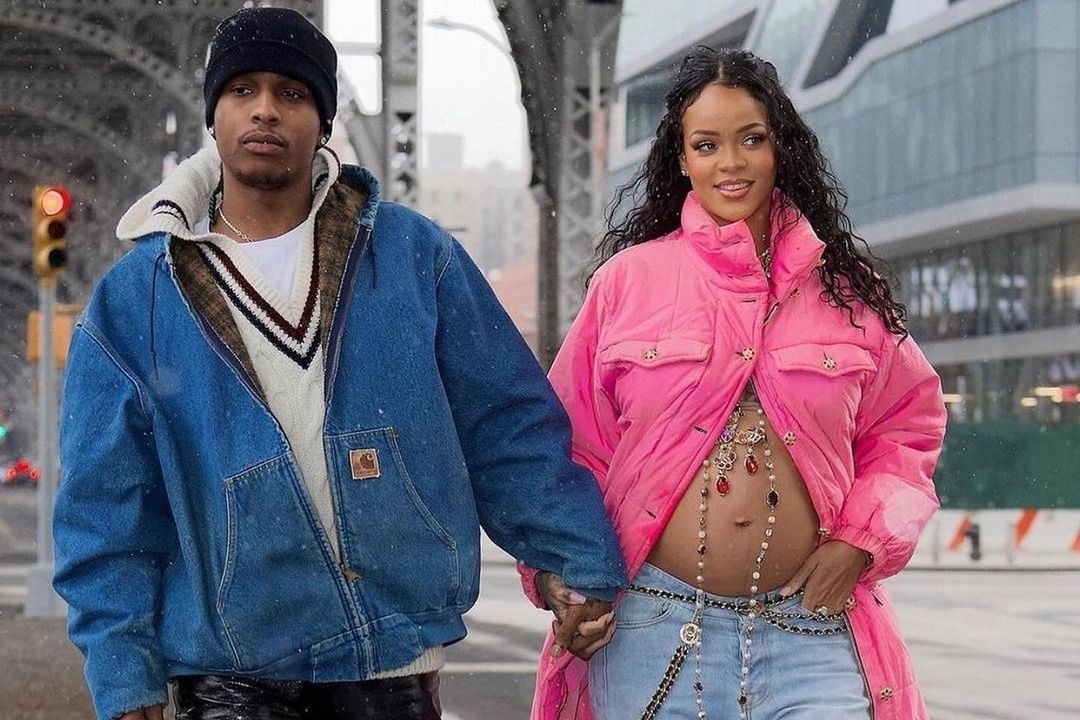 Baby aside, the singer has positioned herself as the mother of contemporary pop culture

There comes a time in many a celebrity’s life when they must inform the public that they have created another, miniature celebrity. The act of that reveal is as intimate as it is strategic, offering us a glimpse into the interior lives of the most inaccessible people on earth. When that happens to be Rihanna, though, the moment goes beyond likes, shares, or column fodder, and becomes an instant cultural milestone. Yesterday, the singer and A$AP Rocky announced they were several months along with a series of “off-duty” images shot by photographer Diggzy in Harlem. And right now, it’s the only thing that matters. She is the only person in the world.

Ever since Demi Moore bore her distended stomach on the front cover of Vanity Fair in 1991, images of pregnant celebrities have sparked a frenzy. In recent memory, the pregnant to viral post pipeline has been carved out by the likes of Beyoncé, Kylie Jenner, Cardi B, and Nicki Minaj, who have accrued some of Instagram’s most-liked pictures in their respective years. The process usually goes something like this: get papped in public on wearing laughably bulky outerwear, vehemently deny you’re expecting, and once the timeline has smelt blood, bingo! It’s time to hire a world famous photographer, decide on some kind of art historical reference, no doubt buy a veil or a flower crown, and cover all your sore bits in a slither of Grecian fabric. Think the immaculate conception, but in a Shoreditch Instagram cafe. And the formula has become so formulaic, that Lil Nas X parodied the genre as part of his Montero launch.

Rihanna, of course, did things a little differently. At some point over the last week, she chose to step into the deserted, snow-daubed streets of New York and let the chill wind blow her coat flaps akimbo, revealing a jewel-adorned baby bump beneath. This wasn’t to buck the pregnancy portrait trend, though, she merely transformed the high-concept Virgin Madonna trope into something, quite literally, street level. In fact, the whole thing referenced (the actual) Madonna’s Like a Prayer album cover, with her hands tucked into the pockets of low-slung jeans, stomach covered only by a string of costume jewellery on a long pearl necklace. And though the general mood leans into Diggzy’s low-key, paparazzi-style photography, this was no less calculated than any of her preggers predecessors.

Other pundits have read the runes of Anna Wintour’s debut Vogue cover on the shoot – that legendary photo of a pregnant Michaela Bercu, windswept and beaming on the street, wearing a back-to-front Christian Lacroix top with a jewelled-cross embellishment. So it’s as if Rhianna is winking to fashion itself, then, underscoring her ability to remodel the institution in her own image. This was, after all, one of those wildfire moments when clothing collides with pop culture to create canon. To mark the occasion, Rihanna wore a long pink puffer from Karl Lagerfeld’s AW96 collection over floor-skimming, ripped jeans which had been spliced beneath her knife-point stilettos. A$AP Rocky, meanwhile, wore leather trousers from British-Caribbean Fashion East designer Maximilian (who has designed several custom looks for Rih), a Carhartt denim jacket, and a hooded varsity sweater.

Last year, writer (and oracle) Durga Chew-Bose wrote the following: “Isn’t it the case that with each new outfit, Rihanna erects a monument, sends out a flare and lights up group texts? She gives denim an ulterior motive, reinstates the pin-thin heel, and works over the concept of a hat. She is super-fluent with fur trim and piling on Chanel pearls when going to the store. She can play to her audience in nothing more than ripped cut-offs and the colour pink.” Though these words were written in Dazed’s September issue, they are near-prophetic in hindsight. And so enormous is Rhianna’s impact that according to data by Love the Sales, an online fashion aggregator, searches for “pink padded coats” increased by 200 per cent within an hour of the photos’ release, while those for “ripped blue jeans” spiked by 175 per cent.

Rihanna may have rewritten the rules of the big ol’ bump reveal but she has also reaffirmed herself as the mother of contemporary pop culture – knowingly playing with genre, fashion, and fame by transforming the obviously cringe into something effortlessly cool. Perfect, beautiful, delicate even. Or perhaps it’s just an elaborate album reveal? I think people would let her off…