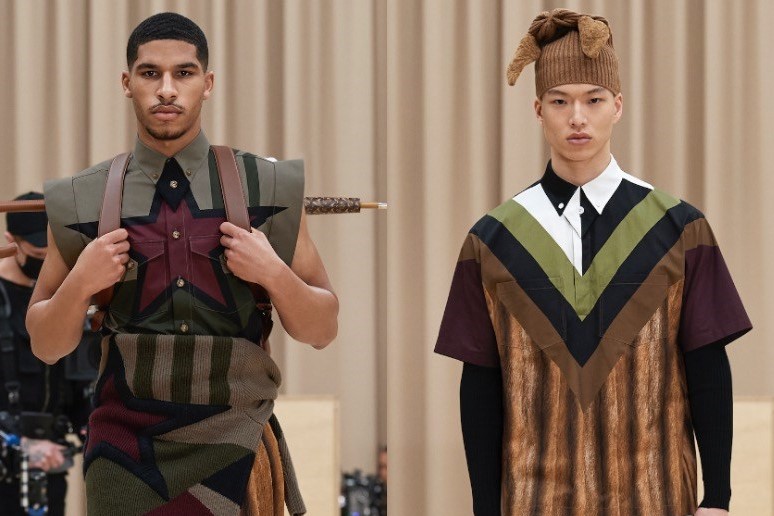 …and honestly, who can blame him?

Exactly a year ago today, Milan Fashion Week was coming to an uneasy close. With the coronavirus becoming an ever more present threat, the final few days of the events saw shows cancelled or otherwise only half full, as industry members fled home on early flights, or otherwise joined lengthy queues outside the city’s pharmacies, as they tried to get their hands on gold dust-like bottles of sanitiser and masks. Later, as the evening of the last day rolled around, an announcement from the Italian government revealed schools, public events, and non-essential stores would be shutting their doors with immediate effect – and we all know what happened next.

Locked down for the best part of the year along with the rest of us, it makes sense, then, that Riccardo Tisci is dreaming of escape right now – because aren’t we all? Leaving behind the co-ed shows he’s become known for since taking the reins at Burberry, this season, the designer opted to show a menswear-heavy offering robust with hardy house classics designed with the outdoors in mind. In stark contrast to his SS21 presentation, which saw subversive contemporary artist Anne Imhof throw a wild gig in the middle of the woods, this season saw Tisci strip things back, as part of a live runway broadcast beamed directly into our bedrooms this afternoon.

Styled by new Dazed family member, editor-in-chief Ibrahim Kamara, models made their way round the catwalk in a series of sharply-cut cotton trenches, some of which were reimagined as Harrington hybrids or otherwise cinched at the waist with silk scarves. “Enclosed indoors, I dreamt of the outdoors and its beauty, fuelled by the thought of the creativity that comes when we are together,” Tisci explained of his inspiration. “I became fascinated by the widespread British craft and outdoor movements of the early 20th century, when people escaped to explore the unknown countryside (forming) communities with a deep respect for nature and (looking) forward to a future full of possibility.”

Beyond the house’s iconic trench, clean duffles and car coats were layered over silk, tunic-like shirts, knitted sweaters, and cardigans in collegiate shades of oxblood, bottle green, and grey, while, at the more casual end of the scale, fringe-trimmed tees and panelled geometric sweatshirts were matched with cut-out mesh cycling shorts, relaxed bermudas, and B-emblazoned varsity bombers, with smatterings of animal print and Burberry checks peeping from under collars, cuffs, and hems throughout.

Offering further confirmation skirts are hot for men as we hurtle towards AW21 (although we mean, when weren’t they?) a series of looks also saw heavy pleated wool kilts worn over languid trousers and second skin-like wipe-clean leather boots ideal for stomping through the mud – though we wouldn’t necessarily advise it, given their likely quite hefty price tag. Given Tisci spawned a skirts-for-men moment back in his Givenchy days (see: Kanye West performing in a leather kilt back during his Watch The Throne tour) it’s no real surprise that he’s proposing it once more a little further down the line.

Check out the collection in the gallery above, and head here for more from London Fashion Week as it happens.