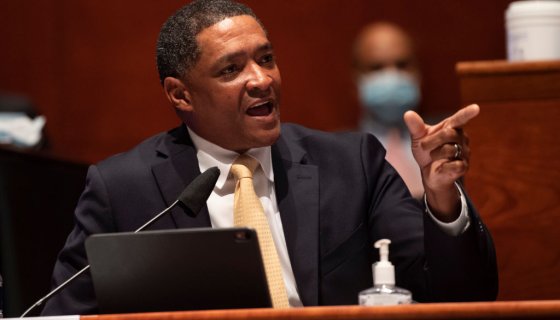 Intense discussions between opposing elected officials isn’t a new thing but in the era of , contentious disagreements are becoming the norm. An incident that occurred during a discussion between two congressmen, Rep. Cedric Richmond and Rep. Matt Gaetz, got especially testy but Richmond handled it quite smoothly.

During a House Judiciary Committee session, Richmond, a Black Democrat representing Louisiana, took his turn to discuss the finer points of the pending Justice and Policing Act that the House of Representatives will soon vote on. Richmond expressed during his speaking time that the urgency for as it relates to the effect it will have on saving Black lives was met with resistance as he yielded his time for an interjection.

Gaetz, a white Republican representing Florida, took offense at Richmond’s concern for the life of his own son and pulling out of thin air that Richmond was suggesting that white people don’t raise or protect their non-Black children. The curious point in all this is that Gaetz, as far as we know, isn’t a parent but was visibly upset at Richmond.

“I appreciate your passion,” Gaetz said. “Are you suggesting that you’re certain that none of us have nonwhite children?”

Richmond didn’t respond immediately, allowing Gaetz to get to his point.

Gaetz began by saying, “Because you reflected on your black son and you said none of us can understand…” before Richmond cut him off by replying with, “”Matt, Matt!, stop. I’m not about to get sidetracked about the color of our children. Were talking about black kids.”

Things got testier after Richmond reclaimed his time, but Gaetz was determined to escalate the debate.

“It is not about the color of your kids. It is about Black males,” Richmond said in his retort. “Black people in the streets that are getting killed. And if one of them happens to be your kid I’m concerned about him too and clearly, I’m more concerned about him then you are.”

Gaetz then fired back with, “You’re claiming you’re more concerned for my family than I am? Who the hell do you think you are?”

Richmond hit Gaetz with a low-key “if the shoe fits” reply while Gaetz clearly wasn’t done hopping up and down in place.

After House Judiciary Committee Chairman Jerrold Nadler took control of the situation somewhat, Richmond turned to Gaetz to say, “was that a nerve?”

Via Twitter earlier today (June 18), Gaetz attempted to explain why he flew into a rage by sharing a story of a 19-year-old man he refers to as his son in what feels like an all-too-convenient moment to get some MAGA sympathy.

“For all those wondering, this is my son Nestor. We share no blood but he is my life. He came from Cuba (legally, of course) six years ago and lives with me in Florida,” Gaetz wrote.

He added, “As you can imagine, I was triggered when (to make an absurd debate point) a fellow congressman diminished the contributions of Republicans because we don’t raise non-white kids.”

Watch the exchange in the video below.

Richmond: "It's not about the color of your kids. It's about black males…If one of them happens to be your kid, I'm more concerned about him then you!"

Gaetz: "Who the hell do you think you are?!" pic.twitter.com/5mHsClRRJD