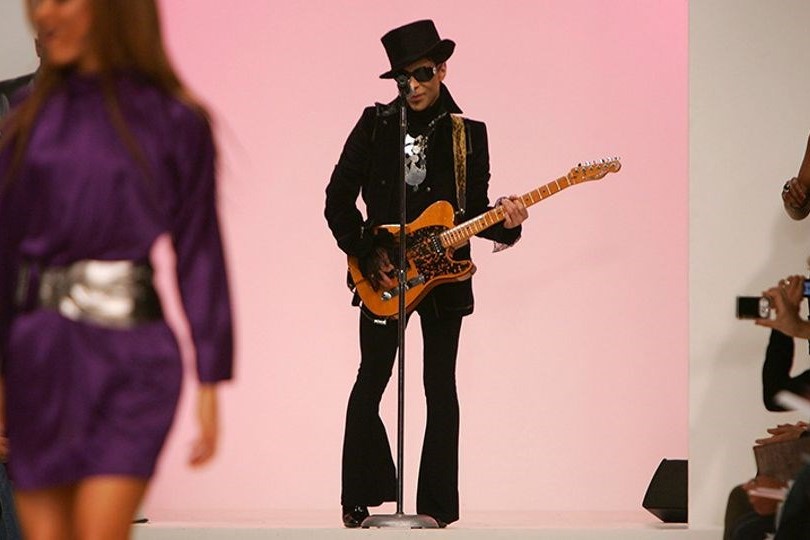 Before he was an interior and homeware extraordinaire, Matthew Williamson was British fashion’s “king of boho”. The designer’s brightly coloured, floral patterned frocks found favour with the likes of 00s faves Sienna Miller, Kate Moss, and Gwyneth Paltrow – and, in 2007, earned him a seemingly unlikely fan: Prince.

The pop icon took centre stage at Williamson’s SS08 show, sitting frow with his then-girlfriend Chelsea Rodgers. As models strutted down the catwalk, an inconspicuous Prince began to sing from his seat, treating the audience to a live version of – you guessed it – “Chelsea Rodgers”.

The track’s music video is a compilation of clips from Williamson’s show, starring the designer himself. In it, Prince can be seen eventually joining the band and his Australian dancers, The Twins, on stage, as dozens of models in aztec patterns, butterfly prints, and ruffle mini dresses walk the runway.

If you’re wondering WTF he was doing there, according to a 2007 Telegraph article, Rodgers was a big fan of Williamson’s clothes and was behind Prince’s involvement in the show. “I met Prince in 2008 as he wanted to perform at my show at LFW as his girlfriend at the time, Chelsea Rodgers, was a fan of my work,” Williamson told Grazia in 2016.

“He didn’t rehearse, and came moments before his performance at the show as I was greeting Anna Wintour backstage,” continued Williamson. “As the beat kicked in, he got up from his seat and performed his track down the length of my catwalk as the models and I looked on through the monitor backstage in complete awe. The audience was amazed to be in the presence of such a legend and nobody expected it. It was a once in a lifetime surprise for all.”

Williamson explained that Prince later joined the designer at his after party, and invited him to his O2 gig the next night. “He was incredible on stage and after the show he was playful, upbeat, and a true gentleman,” Williamson said of the runway performance. “I’ll never forget this moment and he will always be in my mind a musical legend and a kind, fun loving man.”