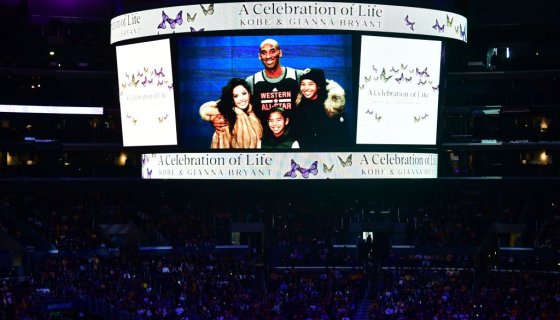 If you’re trying to sell that program or ticket from , don’t even think about using eBay. The popular online auction and shopping site is removing any items related to the event from its website.

Enforcing its policy, which prohibits sellers from profiting off “human tragedy or suffering,” eBay is refusing to sell any items or memorabilia from Kobe and Gianna’s memorial service that took place earlier this week in the Staples Center. As expected, TMZ exclusively reported that souvenirs from the service such as ticket stubs to program booklets and the prices for the items are in thousands of dollars. The average starting bid for “memorial bundles” is around $3,000, and if you don’t feel like going through a bidding war, $5,000. One XL shirt has already sold for $2,025.

Now TMZ Sports s reporting eBay is working frantically to pull down those items with the celebrity gossip site reporting that multiple listings have begun to disappear from eBay from over the past 24 hours.

Turns out, eBay has a policy that prohibits sellers from profiting off of “human tragedy or suffering.”
In fact, eBay sent an email to one seller explaining their position — “Please note, due to sudden and tragic passing of Kobe Bryant – eBay has made the decision to prohibit the sale of merchandise, images and mugs relating to their passing.”
“We do not allow listings that attempt to profit from human tragedy or suffering.”NOW if you still want to purchase items like jersey, basketball, or photos signed by Kobe the eBay’s policy does not prevent those items from being sold on the site. But due to his , don’t be shocked to see ridiculous prices on those items. We just recently reported that an 8th-grade yearbook featuring a prophetic message from Bean is likely to fetch over .—Photo: Getty Images / Getty