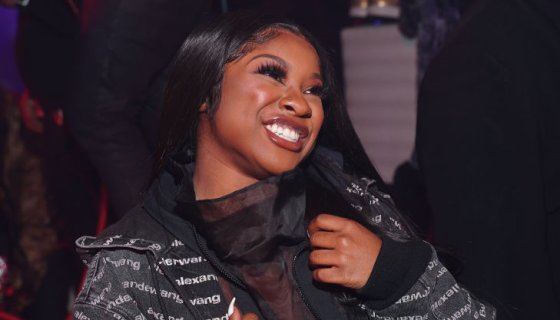 may have thought that ’s problematic comment about Black women was funny, but his daughter surely didn’t and she’s got plenty to say.

Earlier this week, the oldest of the Carter children took to Twitter to denounce the laughing by her father, Lil Wayne, and 50 Cent on the latest episode of Lil Wayne’s , in which the G-Unit head honcho claimed he caught flack from “angry Black women” over his choice to date “exotic women.”

“See what I’m saying? And I look and I go yo, this is why they get mad, they get angry. You see a lot of sisters they go, ‘Oh you f*cking, you f*cking with this kind of girl, or that kind of girl?” 50 said. “That sh*t is exotic! That sh*t look a lot different from the s–t that you see in the neighborhood all the time,” 50 says as Wayne laughs. “That sh*t look like it just came off a boat baby. Godamn! You don’t like that muthf*cka? You don’t like that? Godamn what’s the matter with you? It feel like something foreign, it feel like something that you just can’t get. In some kind of ways it is interesting to explore. You know what I’m saying? But they get mad, they get angry. ‘How did you end up with this muthaf*cka or this that,’ And I’m like huh?”

“For real, they get real–” Wayne said interjecting.

“And so my instincts always make me get defensive. Look at this Black angry muthaf*cka, get the f*ck up out of here, tryna f*ck up the vibe,” 50 continued while jokingly punching the air.

Reginae Carter, who has been vocal about bugging up Black women over recent years, took to Twitter to respond to the childish comments, boldly proclaiming that the natural qualities of Black women make us just as exotic as anyone else.

While Reginae decided to take the more positive approach by encouraging Black woman without directly calling out her father, fans of the rappers weren’t so gentle calling out the two rappers who have their own challenges in the looks department for talking down on Black women at a time when we are striving for equality as a whole.

While many were taken aback by 50’s comments and Lil Wayne’s cosign, there were many that used the opportunity to point out that the two rappers’ comments are exactly why they need to be canceled. while others pointed out their previous problematic behavior, including 50 Cent’s abandonment of his oldest son, as the reasoning for no longer supporting them as artists.

Yes! They should be canceled! Let's all let @AppleMusic know we aren't pleased with #LilWayne and #50cent since the comments were made on their platform https://t.co/Bh7xZPLREj

Vivica Fox weighed in on the subject during the latest episode of FOX Soul, calling out her ex for his disrespectful comments while throwing shade that he “can’t handle” Black women.

“Can’t handle a Black woman can you?!,” Vivica Fox.

Although, neither 50 Cent nor Lil Wayne has directly responded to Reginae’s proclamation, 50 did respond to Vivica’s jab claiming that she is “still sprung” after 17-years.

#50Cent responds to #VivicaAFox’s comments about his recent take on “exotic women”. 👀

Either way, Twitter wasn’t here for 50’s comments and had plenty to say about it. From commenting on his own shortcomings to pointing out Lil Wayne’s cosign despite having a Black woman for a daughter, Twitter brought the jokes and we were here for it.

Check out the full episode of Young Money Radio featuring 50 Cent below and see what Twitter had to say after the jump.

When will you let us rest? With all that’s going on your priority is to attack black women? Why? @50cent why were you mimicking assaulting a dark skinned black woman in the end? 🤮🤮🤮🤮 pic.twitter.com/FzM7KEzXxn

I really fucking hate how Reginae felt she had to get on here and affirm her own beauty after that shit with 50cent and her daddy.

Lilwayne proved you right with everything you said about him. He doesn’t give a shit about resume or any black women. He was giggling and agreeing with 50cent

lil Wayne said beat that pussy up like Emmet Till and 50cent has made fun of his black costars unapologetically, this exchange is very unsurprising pic.twitter.com/tvidrnIjWH

Im just waiting for somebody to tell @ShamoneKhia what #50cent and #lilwayne said.

Are you ladies really mad about what #50Cent said on #LilWayne podcast? To give some of you an extra dose of encouragement, 50's word doesn't count. He abandoned his son & has allegedly put hands-on his "exotic" baby mother, his words, not mine. Some things aren't worth fighting

This is why the bullshit 50cent and Lil Wayne were talking and giggling about like little bitches is FUCKED UP. Because of this. White passing colorist/racist girls end up disrespecting Black women, marrying Black men and then having Black children. pic.twitter.com/Wq3bgvFJHr

It’s always a Black ass nigga talking about how he don’t like Black women. #50Cent #LilWayne

I really wish @50cent and @LilTunechi would keep Blk Women out they mouths when explaining their dating preferences. You want to date "exotic" women? Do u.

This narrative of the "Angry Blk Woman" don't need your ilk to perpetuate it further.

We deal with enough as it is! https://t.co/BP3Xdz8Aoy