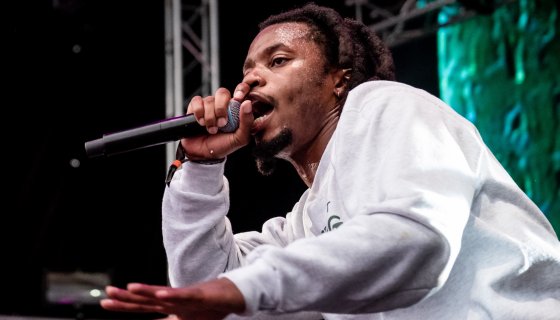 is fresh off releasing his latest EP, Unlocked, with producer Kenny Beats just a week ago and now he’s set to take part in another installment of the Red Bull Zeltron World Wide series. This time, Zeltron, the alter ego of Curry, will be taking on the extremely talented .

For those unfamiliar, Red Bull Zeltron World Wide is a friendly head-to-head competition styled in the vein of a professional wrestling event complete with a ring with the participants facing off with one another in a five-round battle of their best tracks. Beginning in 2018 with Curry taking on the Brooklyn trio of The Flatbush Zombies in Miami, the unique live show has grown in size since.

On March 20 in San Francisco, Calif., Zeltron will be competing against Rico Nasty, who too worked with the aforementioned Kenny Beats on the project Anger Management. The Red Bull Zeltron World Wide series kicked off last November in Atlanta with Curry battling Pro Era’s Joey BadA$$.

Before Zeltron and Rico Nasty lock horns in the Bay Area, a rescheduled battle between Curry and J.I.D. will take place on Feb. 29 in Miami, Fla. after a January date was moved. An upcoming event in New York City is soon to be announced as well. Thus far, the shows have only been occurring stateside, but there’s hope that with the “world wide” in the series name that Zeltron will bless fans in other nations with this innovative experience from Red Bull.

The event kicks off on March 20 at the Fort Mason Festival Pavillion in San Francisco, Calif.