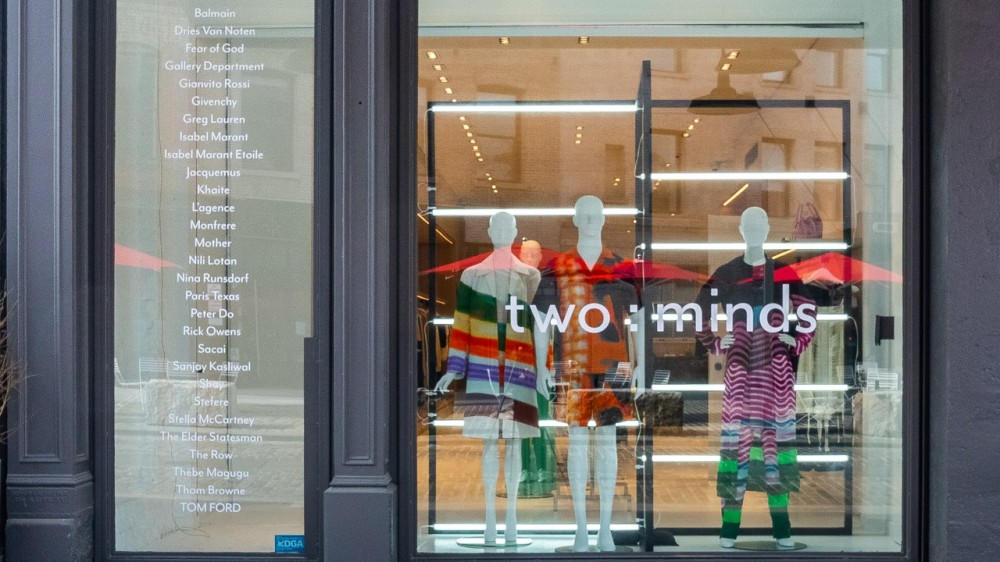 Spring is in the air, and with it, the hope of just a taste of normalcy. For some, that may mean going to revisit your favorite restaurant. For others, it’s a good old-fashioned shopping trip. In the last few years, the retail landscape has shrunk dramatically, a phenomenon that's only been exacerbated by the pandemic. Some of the most agenda-setting concept stores have shuttered, including Colette in Paris and Opening Ceremony in New York. As people start getting dressed up again—just look at how people are dressing in New York’s parks!—they’ll need a place to shop and be inspired. Enter: Two: Minds, founded by former Jeffrey buyer Jesse Dong and Robert Rosenthal.

Dong has curated an edit of brands that combines high fashion stalwarts like Givenchy, Thom Browne, and The Row with exciting emerging designers. In the sleek, minimal space you’ll find covetable pieces by South African designer and LVMH prize winner Thebe Magugu, and Greg Lauren, known for repurposing army tents and textiles into clothing. The airy environment is meant to feel like you’re in your own home—if your home were filled with rack upon rack of gorgeous fashion. “We had a client in the store yesterday, and she was in the fitting rooms and said ‘oh my god I love it, it felt like I was in my closet,’” Dong told me over the phone.

Conceptualizing, stocking, and launching a high-end store during a pandemic was no easy feat. Dong and Rosenthal really began to start work on the store last June, a month after Jeffrey closed. “The deciding factor was the space,” Dong said. “I told myself I would only open on Gansevoort. As soon as I walked into 34 Gansevoort, we asked for the paperwork.” From there, he began cold calling brands and was pleasantly surprised when so many of his contacts wanted in. Everything came to fruition over Zoom, up until opening day last week. “[Rosenthal and I] saw each other for the first time in over 18 months on Monday, two days before the store officially opened,” Dong says.

Ultimately, the duo wanted to create a welcoming atmosphere, because that was how Dong felt at Jeffrey when he had just moved to New York. “You want people to feel like they’re welcome,” he says. “Our staff can help educate the next generation. We want the Parsons and FIT freshmen to come in and say oh wow I was just learning about this brand in class. I was that kid at Jeffrey. If we build that super inviting community atmosphere, success will come.”  Improbably, they lucked into some good timing, with vaccinations (and corresponding optimism) on the rise in New York City. “Gone are the days of casual: women and men are asking for cocktail, event, and party attire,” Dong says. For your dream reemergence outfit, as well as a little escapism, Two: Minds is open for business 34 Gansevoort Street.