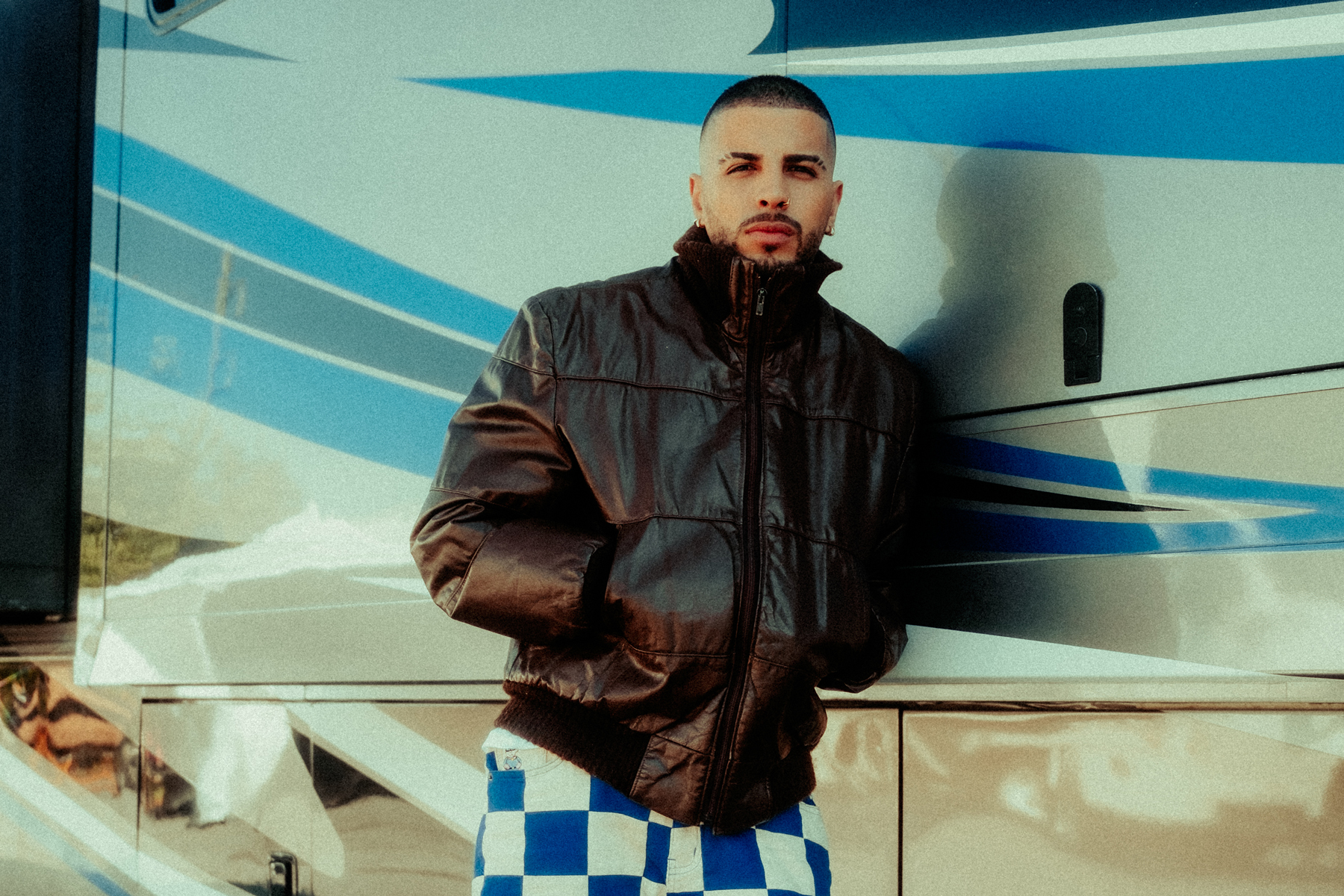 In March, the Puerto Rican singer Rauw Alejandro played “Todo De Ti” for his label for the first time. While reggaeton loops served as the jet fuel that helped launch Spanish-language pop into global prominence during the 2010s, the drums in Alejandro’s new single are flat and square, landing on the second and fourth beat and ignoring the lurching syncopation that makes reggaeton lethal on dancefloors. “Todo De Ti” also opens up with a sprightly synthesizer that wouldn’t be out of place at a local bar’s Eighties night.

Unlike “Fantasias” and “Reloj,” melodic reggaeton lay-ups that became charting hits for Alejandro, this was nu-new-wave; it’s no surprise that members of the singer’s team were taken aback when they heard “Todo De Ti.” “Rauw was like, ‘I have this record, I feel it can be different, but I want to be ready with another one in case it doesn’t work out,’” recalls John Eddie Perez, senior manager of A&R and marketing at Alejandro’s label, Sony Latin. “With ‘Todo De Ti’ there was a chance it wouldn’t even make the album. We said, ‘we’ll support you.’ But we have something different on our hands — I don’t like to use this word, but we were a little skeptical of how it would work out.”

'Dakiti' and Beyond: How House Music Infiltrated Reggaeton's Mainstream

Rauw Alejandro Is Ready to Take on the World

'Silence of the Lambs': The Complete Buffalo Bill Story

But any skepticism ultimately proved unwarranted: “Todo De Ti” has been a resounding commercial success, one of the Top Five most popular songs on Spotify’s Global chart for all of June, and a rising hit in the U.S. as well. “It surpassed all expectations and went global immediately,” Perez says happily.

Some artists and executives in the Latin music industry see Alejandro’s power-pop curveball, part of his new Vice Versa album, as more than just a hit. “Every once in a while an artist comes and sets a trend,” Perez notes. “Now Rauw is doing that.”

“When Rauw decided to drop ‘Todo De Ti,’ for English speakers it’s just a pop record, but for Spanish speakers, nobody in his genre is doing that and having the success he’s having,” adds Alvaro Diaz, who has known Alejandro for years and co-wrote four songs on Vice Versa. For other artists, “it’s like, shit, now we can do whatever we want to do.”

“Todo De Ti” comes at a time when the sound of mainstream Latin hits appears to be loosening, slipping out from under reggaeton’s long shadow. Kali Uchis’ “Telepatía” made it all the way to Number One on the Latin airplay chart this week despite being closer to breathy Eighties funk than reggaeton. “Everybody’s cheering for Rauw and for Kali,” says Nir Seroussi, executive vice president of Interscope Records. “We went from, if we put out a record and it’s not reggaeton, nothing is going to happen, to, you know what — there’s a chance.”

The reggaeton takeover in the first half of the 2010s was initially welcomed. “It was a blessing,” Seroussi says, “because it united the youth across all the Latin countries,” leading to hits of unprecedented size. “Artists who were dormant had huge comebacks,” the executive continues. “Carlos Vives, Ricky [Martin] and Shakira with Maluma, can we say Luis Fonsi? Reggaeton revived his career.”

At the same time, a marketplace that had once been split into numerous regions, each with their own styles and success stories, was suddenly united into a single kingdom with reggaeton at the helm. “You opened every country’s chart, and the Top Ten were reggaeton records, and it was the same artists all across the board,” Seroussi notes.

At any given moment, of course, every style of popular music is guaranteed to have a certain amount of homogeneity, whether it’s the prevalence of guitar loops in recent hip-hop, R&B singers’ long-standing obsession with imitating Drake, or a wave of young, agitated rock acts embracing Travis Barker as a producer. And whenever one genre is on top of pop music’s pyramid, artists in other genres wring their hands, worried about declining opportunities in a fiercely competitive industry.

But “Latin music” is not a genre; it’s a ridiculously broad catch-all term used by the U.S. music industry that elides the vast differences between styles as varied as banda and trap. That makes homogeneity seem more toxic — when all of Latin music starts to appear synonymous with reggaeton, there’s a threat that other important perspectives, rhythms, and melodies might be starved of oxygen to the point where they die away. “When everything becomes a monoculture,” the manager Juan Paz told Nuevo Culture in 2018, “it’s dangerous for the sake of artistry.”

There have been acts amassing millions of streams who were willing to ignore reggaeton’s hegemony for the space of a song or two. Ozuna delivered a convincing cumbia fusion on his best album; J. Balvin sampled Cuban music and threw himself at afrobeats; R&B flared in the “Toda” remix and Paloma Mami’s breakout single. And on his first two albums, Bad Bunny foregrounded aggressive genre pivots — from trap to thrashing rock, for example. While some of these transitions were more effective as shock tactics than as songs, they nevertheless signaled a willingness to engage with a world beyond reggaeton.

But when it came to commercial hit singles, variety was much harder to find. (One exception was Balvin and Nicky Jam’s sublime hit “X,” a slippery fusion, co-produced by Suriname-born, Netherlands-based production duo Afro Bros, that borrowed from afrobeats and house music.) And even some singers in the Latin music industry who created their own unusual hybrids — think of Rosalía, who soldered traditional flamenco to a frame of electronic music and R&B — have had to make straightforward reggaeton like “Con Altura” to achieve major commercial success.

“Latin music right now, all the sound is the same,” Eduardo “Visitante” Cabra, one of the most celebrated artists in the history of the Spanish-language pop, told Nuevo Culture in 2018. “It’s all the same harmony, the same arrangement, the same key.”

Producers who were known for their reggaeton work also noticed that hits sometimes come at the cost of individuality. “For a moment you saw [people deciding], ‘let’s go with what we already know is gonna work, let’s not go too left-field, people won’t understand it,’” says Marco “Tainy” Masís, a veteran reggaeton producer and one of the better beat-makers working in any genre today. “You saw that fear in artists and labels. As a producer, you know what they’re gonna ask from you.”

But reggaeton’s reign has lasted long enough that young acts have now started to think of it as the music of their parents, making it only natural that their artistic interests lie elsewhere. “The kids that come through our studio nowadays and are playing us their music, when you say reggaeton, they say, ‘yeah, my dad listened to Wisin Y Yandel,’” Seroussi explains. “They respect it. But they say, ‘I grew up with it, that’s not what I want to do.’ Rauw wanted to be Chris Brown since I met him.”

Alejandro was planning to make something like Vice Versa for years, according to Caleb Calloway, another longtime friend and producer on the new album. 2020’s Afrodisíaco “was his first big project, so we wanted to make sure we had a more commercial approach,” Calloway explains. (There were hints of what was to come on the Afrodisíaco track “Química,” which zipped from reggaeton to house music.) “The next album, we wanted it to be more experimental,” the producer continues. In addition to reggaeton and trap, Vice Versa touches credibly on power-pop, new wave, drum and bass, house music, and Brazilian baile funk.

Marching orders often came from Alejandro himself. Tainy was in Tulum, Mexico writing with Manuel Lara, a producer who also has an alternative band called the Lara Project, when he got a message from Alejandro: “He told me he wanted to find more alternative vibes for his instrumentals,” Tainy remembers. The producers rustled up three demos, one of which became “Desenfocao,’” a brooding rock track that Alejandro uses as the backdrop for a tortured tale; the singer flails through a never-ending river of nightlife, trying to escape the memories of an old love. “The bed is full,” he sings at one point in Spanish. “And I am empty.”

Alejandro shot off similar flares when it came to “¿Cuando Fue?” and “Brazilera.” Tainy had started the “¿Cuándo Fue?” beat years ago, Alejandro decided he needed to push the track into the territory of drum-and-bass, a fast-and-furious sub-genre of dance music. The resulting track skitters and thunders before a string section brings it to a syrupy close.

While Calloway hopes some of the head-turners on Vice Versa will prove to other artists that “you can do different things in the Latin industry,” it’s unlikely there will be a sea change in the sound of the mainstream overnight. “We all get anxious, like I wish change were here tomorrow because it would open a lot of opportunities for a lot of cool artists,” Seroussi says. However, “change is slow.”

Part of that is because singers usually have to enjoy a certain amount of commercial success before they are given enough leeway to experiment, and that usually means making reggaeton first. “It was hard to get to this point,” Calloway  says. “It took years.” And even when an artist is granted relative freedom, “there’s a lot of time you try things and it doesn’t work,” Calloway continues. “Or maybe it works but it’s weird, and the label’s like, let’s not take that risk.”

On top of that, just a small group of producers and writers seem to be willing — or allowed — to buck trends at the moment. Alejandro used Tainy, Calloway, Diaz, and Mr. Nais Gai (who co-wrote and co-produced “Todo De Ti”) on Afrodisíaco. Tainy and Lara also worked on Kali Uchis’ “Telepatía.”

But despite these obstacles, Seroussi is noticing a transition. “We went from having this situation where the Top Ten was the same everywhere back to local movements,” he says. “Right now the Top Ten in Argentina is very unique. It’s starting to happen that more different things are sprinkled in Spain and in Mexico.”

And the success of songs like “Todo De Ti,” “Telepatía,” and Camilo’s searingly bright cumbia “Vida de Rico” — a Number One Latin radio hit in January — means it’s inevitable that more acts will try to branch out.

“If Rauw can do it,” says Diaz, who is preparing his own solo material, “we can do it too.”