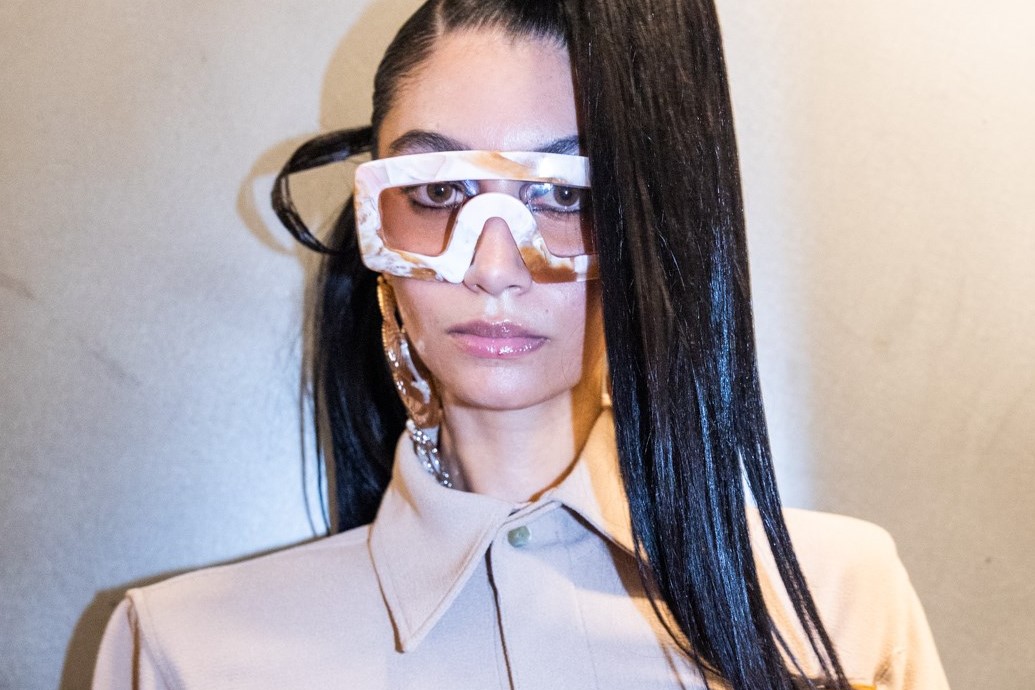 The transgressive designer is back and better than ever, shifting gears on his label with an elevated SS22 collection

For those who’ve followed Raul Lopez’s career from the heady early days of Hood By Air right through to the genesis of his (kind-of) namesake brand Luar, it’s likely you’ll have been missing the transgressive designer’s name when skimming the NYFW schedule across the last few years. Yes, we’ve been through a pandemic, when plenty of houses sat out the shows, but Lopez’s streetcast cohort of legendary children haven’t graced the runway since early 2019 – which in fashion terms amounts to fucking ages.

Turns out that the designer and former Dazed 100er was long overdue a break. Establishing Hood By Air in 2005 alongside Shayne Oliver, it was pedal to the metal from there on out. Then, two years ago, he decided enough was enough – slamming on the breaks, he switched NY for Grand Cayman in a bid to reassess and reevaluate not just his relationship with fashion, but his relationship with himself. According to him, there was much deconditioning to be done.

Now, as NYFW makes its long-awaited IRL return, so too does Luar. Staging his comeback show off-schedule last night, Lopez took over a Brooklyn parking lot where he shifted gears and accelerated into a whole new era. What did this mean? Well, Lopez’s guard has come down, for one. Referring to himself as “an oyster” (a fitting analogy, given his Rags to Riches ‘foodie bitch’ status), the designer cracked open his ‘rough’ shell and allowed us a look inside at his ‘mushy’ insides.

The pearl at the centre of it all took the form of an elevated collection that was still unmistakably Luar. The hard-edged, subversive tailoring that’s written deep in the label’s DNA code took the form of boxy, zip-up jackets, louche asymmetric trousers, and pleated half-kilts presented in brown pinstriped cotton and heavy indigo denim, before eventually making way for softer looks. Crisp shirts tucked into comfy sweatpants and gym shorts and matched with silk-satin ties bearing the house’s moniker were the epitome of business-casual, while standouts included a pair of ballooning parachute pants and a wide-shouldered, ecru jacket with oversized lapels. Distinctive Luar flourishes came by way of lobe-dragging oyster shell chandelier earrings dripping with crystals, massive mother-of-pearl shades, and the most insane moulded stilettos.

Ahead of the show, the notoriously difficult-to-pin-down designer and I caught up over the phone (“I would never have taken this call before, I’d have been going nuts,” he tells me). This season, it was all about giving his girls something new and beautiful, but far more wearable than collections past – because as he so rightly points out, you can’t keep creating art that doesn’t sell. Now intent on striking a balance between commercial and creative, he’s doing things on his own terms for perhaps the first time ever. “I want every artist to hear this right now,” he tells me. “Be a fucking capitalist. It does not take away from your art. It’s making what you’re doing sustainable, it’s putting food on the table, and it’s making sure you can keep sharing your stories, period.”

You’ve had a pretty lengthy break from NYFW by fashion’s standards. Why did you decide you needed to take time out from the industry?

Raul Lopez: After my last show I was just so exhausted and dehydrated, and depressed to be totally honest – I was going crazy. It was just shows back to back, constantly. I don’t think I’d had a real break since starting Hood By Air with Shayne in 2005, and I really needed one. So I went to the Cayman Islands and I’ve just been hanging out down there at Palm Heights (Hotel). Then when I actually took time out, I started reflecting on who I really am as a person, you know? I felt like I’d been conditioned to play up to who I am as this POC Latin boy from Brooklyn, who’s been through some crazy traumas growing up in those neighbourhoods, and who didn’t feel like I fitted in when I was coming up. It was good to take a step back and be able to think all this stuff through. It’s this shift that’s actually inspired the collection.

Raul Lopez: Well, I kind of wanted to make people understand that, yeah, I might be a little rough around the edges, and I might look intimidating, but I’m actually just like an oyster – like, all muscle, but soft and mushy on the inside. And I can make something that’s really beautiful.

How does that translate within your SS22 collection?

Raul Lopez: So it starts out quite rough, and there’s lots of Luar‘s DNA in terms of denim and thicker fabrics and textures, but eventually this makes way for beautiful light French crepes and silks  – it’s like I’m finally showing the pearl that’s inside, you know? I’m letting my guard down and showing something more elevated. It’s not just a collection just for my friends, because I realised I was kind of infatuated with trying to please them and not really doing exactly what I wanted. The break helped me analyse myself and the brand, and I realised there’s so much more I wanted to do. The collection is cleaner, chicer, more elevated – full of really nice details that you can dress up or down. And it’s also really accessible.

“I was so conditioned by this system that if I didn’t do a show, or as many looks as everyone wanted, I’d be so scared. I was appeasing everyone else without stopping to think about myself. One great thing that this break taught me was that you can just take a break. It’s okay. It’s not that crazy. The internet is there, you will not be forgotten” – Raul Lopez

Is there a piece that you think really sums up the collection, or do you have a favourite look?

Raul Lopez: There’s a lot of tailoring with really subtle geometric shapes cut into the garments, like you really have to look for them. They’re not in your face. It’s a lot of clean lines and, like, beautiful shapes. A lot of tailored pieces.

How do you feel about making your return to NYFW, and giving this new collection its debut?

Raul Lopez: I’m actually really excited about this show – I don’t know, I just have a good feeling about it. Usually I’d be locked in a room in the dark at this point, just going nuts. I would never have taken this call back then, we would not be talking right now. But now, I feel so good. Like, I don’t think I’ve ever felt this good. The break helped cleanse my palate, and really broke the cycle of stress. It gave me the confidence to shift my focus.

So many designers feel intense pressure due to the breakneck, relentless speed of the fashion system, but it sounds like you’ve really gone away and reconfigured your relationship with it. How are you going to handle this side of things from here?

Raul Lopez: Oh, fuck everyone (laughs). I was so conditioned by this system that if I didn’t do a show, or as many looks as everyone wanted, I’d be so scared. I was appeasing everyone else without stopping to think about myself. One great thing that this break taught me was that you can just take a break. It’s okay. It’s not that crazy. The internet is there, you will not be forgotten. Fashion has become so fast, but with the pandemic it was like: ‘Okay, now take a seat’, you know? And I know I needed that.

So now it’s going to be more on your terms…

Raul Lopez: Totally. It might not always be that I do a show or whatever, but now felt like the right time to do one. Listen, I love fashion, and I love a show. As a kid, that’s all I loved, I didn’t know anything else. To me, fashion week is still this kind of nostalgic thing, which triggers something in my brain where I’m just like: I need to be there. But I’m not going to put pressure on myself any more. We can do off-schedule, we can do presentations online or on video – we’re moving into the future. Last year really opened things up for me.

So what’s the show actually going to be like?

Raul Lopez: It’s in Brooklyn, in this commercial parking lot. It’s my first time in Brooklyn, and my first time doing castings! There’s a lot of firsts this season. When I walked in to meet the casting directors, they were like ‘Woah! We can’t believe you’re here’. But I wanted to try something new, to go beyond just street casting, because that’s what I’ve always done with both Luar and Hood By Air. I mean, obviously, I have to have my DNA, the dolls and all the cute children will always be in my show. But I also wanted to elevate things, to step it up a little bit and show people the growth of the brand. So that’s where we’re at.

What’s the mood like in NYC right now? Fashion Week for me feels like it’s re-energised – there are a lot of exciting things going on in terms of rising designers and smaller indie labels…

Raul Lopez: It’s really nice actually. I feel like it kind of died out a little bit, but it’s coming back. And people are passionate – there’s less entitlement, the kids have realised you don’t get into this industry for the glitz and glamour, that it’s really hard work and you have to love it.

“Be a fucking capitalist. Because if they can be capitalists, we can be too. That does not take away from your work, it doesn’t take from your art. It’s making what you’re doing sustainable, it’s putting food on the table, it’s keeping everything pumping and giving the girls what they need, and it’s making sure you can keep sharing your stories, period” – Raul Lopez

Having had some time away from the industry to reassess your relationship with fashion, what advice would you give yourself if you were starting over?

Raul Lopez: Relax and get an accountant. As a designer you’re constantly thinking about stepping outside the box and showing everyone that you can create, but at the end of the day, are you selling? We’re so conditioned to think it’s wrong to make money off your work, but girl, you need to, or you won’t be able to show your work again. And that’s another thing I learned when it came to the rebranding – I need to make money. I need cash to make this business sustainable.

It’s so true – making art and making money shouldn’t be seen as exclusive, and yet there’s a stigma attached to commercial success. You’re seen as ‘selling out’, which is such a stupid, outdated idea.

Raul Lopez: Exactly! Like, I want every artist to hear this right now, and you can quote me: Be a fucking capitalist. Because if they can be capitalists, we can be too. That does not take away from your work, it doesn’t take from your art. It’s making what you’re doing sustainable, it’s putting food on the table, it’s keeping everything pumping and giving the girls what they need, and it’s making sure you can keep sharing your stories, period. I was so scared of making money, but you can’t escape it, so just embrace it and make it work for you. Girl, I’m done – give me my fucking cash!