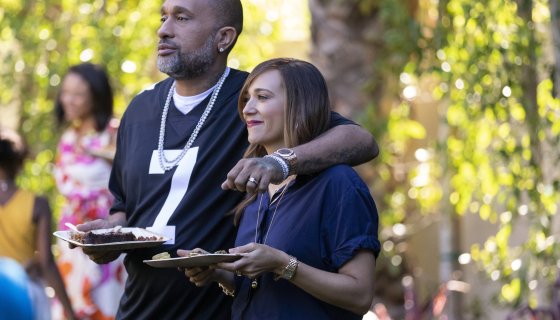 creator is back with a new original series loosely based on his parenting style and married life.

”I can’t wait to be able to show you guys the whole show on APRIL 17th!!! But until then… HERE’S THE TRAILER!!! Pull up to the dysfunction,” Barris said.

Barris, who stars as a fictionalized version of himself with playing his wife and Iman Benson, Genneya Walton, Scarlet Spencer, Justin Claiborne, Ravi Cabot-Conyers, and Richard Gardenhire Jr. as their children; takes us on the journey of what his family life is like—but not all fans are happpy about that.

After Netflix released the trailer for the series, a few fans of Barris’s franchise called him out—again, for another noticeable complaint, the lack of dark skinned actors being reflected in his cast.

I need someone else to push content cuz Kenya Barris is annoying. Like how many shows can you make about your biracial wife & biracial upbringing & call it premium black content. Like you’re on number 4, doing the Same thing. No variety. Like come up with sumn else. Please pic.twitter.com/WEkON2M7Ej

This isn’t the first time that fans have called out Barris for his lighter melanated casting. In 2019 when the show was announced, fans took to Twitter to call out the creator for his lack of diversity in casting, to which Barris responded that his casting choices reflect what his family actually looks like.

”Obviously noticing the critiques, Barris took to Twitter to respond, noting, “I’m also not gonna make up a fake family that genetically makes no sense just for the sake of trying to fill quotas,” Kenya Barris wrote in a since deleted tweet. “I LOVE MY PEOPLE and everything I does [sic] reflects that love. But to cast people like some kinda skin color Allstar game would actually do more harm than good.”

Barris also took the time to disspell rumors that he is fixated on bi-racial women by noting that the entire argument of colorism is divisive and damaging to lighter skinned Black people who face discrimination from the outside just like anyone else.

”The answer is to make sure we keep making good programming and depict ALL our beauty in real ways and roles that show the world the broad spectrum of who we are in REAL ways for EVERYONE 2 c [sic], Barris continued. “I really appreciate ur comments & I hardly ever react to social media but this cut me a little. These kids look like my kids. My very Black REAL kids & they face discrimination every day from others outside our culture and I don’t want them to also see it from US. I’m going to say this and then let what happens happen… Colorism is a divisive tool used by the powerful to separate the truly powerful.”

#BlackAF lands on Netflix on April 17.

Check out the trailer for Black AF below.