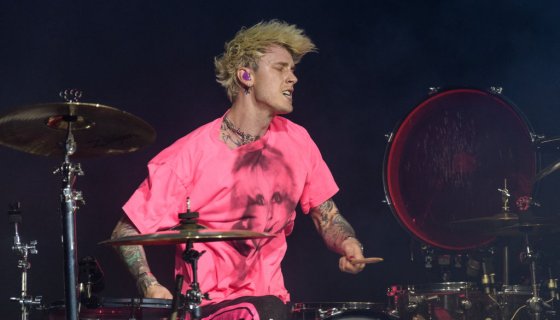 is likely blowing Megan Fox’s back out, allegedly. The happy couple was seen goofing around about town.

Fox appears in MGK’s “Bloody Valentine” video and everyone pretty much assumed they’ve been a thing ever since, if not before.

The couple hung out at The Beer Hunter bar in La Quinta, near Palm Springs, with some friends at a table inside the bar.

Folks in the bar say there was no doubt … Megan and MGK are together.

They split after just shy of an hour, and MGK helped Megan take a load off, and she loved it!

Megan and MGK have gotten super close … he even declared his love for her on social media.

Hey, if he professed his devotion on the ‘Gram, it must be real.

Fox must have a thing for white guys into Hip-Hop. Before MGK, she was rolling with Brian Austin Green of Beverly Hills 90210 fame. The couple just separated in May 2020 after a 10-year marriage.

As for Machine Gun Kelly, he’s been out protesting for Black Lives Matter, so he’s good with us in that regard.

we gon be ALRIGHT!!! #BLM ✊🏿✊🏾✊🏼 now fuck the system up from the inside and sign the right petitions. so many of them are just a couple thousand signatures away from making the change official. you can google Black Lives Matter petitions and find a list for all of them. it’s quick!!