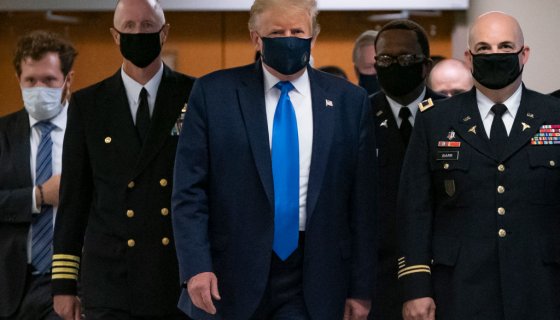 Donald Trump, the , finally wore a mask in public on Saturday (July 11). It happened to finally occur only after 132,000 people have died from the coronavirus in the nation.

President Trump on Saturday wore a mask in public for the first time, after repeated urging from aides that it was a necessary message to send to Americans.

Mr. Trump wore a dark mask affixed with the presidential seal during a visit to the Walter Reed National Military Medical Center. He was surrounded by Secret Service agents and others also wearing masks.

The president had repeatedly dismissed suggestions that he should wear a face covering, frequently appearing in public spaces without one, mocking those who did and ignoring public health rules in several states.

But Mr. Trump had signaled recently that he was more open to masks and told reporters before the visit to the medical center that he planned to wear one.

“I think when you’re in a hospital, especially in that particular setting where you’re talking to a lot of soldiers and people that in some cases just got off the operating tables,” Mr. Trump said. “I think it’s a great thing to wear a mask. I’ve never been against masks, but I do believe they have a time and a place.”

This is the same guy who reportedly refused to wear a mask because he didn’t want to give the media the satisfaction.

To date, per John Hopkins University, there have been 134,815 COVID-19 deaths in the United States. Trump said coronavirus would just go away, repeatedly.

Wear a mask, it’s the least you can do.