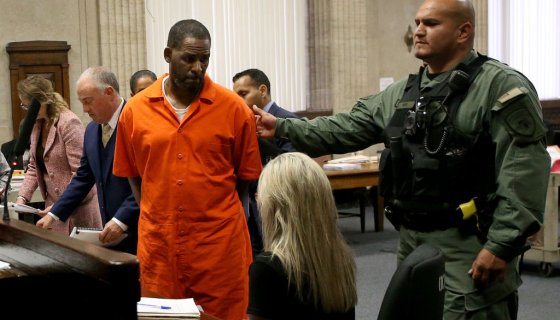 The trials and tribulations of continue to unfold in a court of law and we don’t feel a single bit of sorry for him.

After suffering a bad and having hernia surgery, R. Kelly finally made his appearance in a Brooklyn court… video. According to Page Six the embattled R&B singer was streamed into the courtroom live from a Chi-Town prison where he currently resides as he awaits his upcoming trials for his alleged crimes against many young women.

The “Trapped in the Closet” singer, who is now trapped in a Chicago lockup, kept mostly quiet and looked attentive as he appeared at the hearing on a video screen. He listened with his brow furrowed and his fingers laced, occasionally biting his lower lip.

Being that this is as high a profile as a case can get, the Brooklyn judge noted that she’d have to go through ” hundreds of potential jurors” before things can officially get underway. Though the trial was scheduled to being this past May, the judge presiding over it felt it was “unrealistic” and pushed it back to a July 7 date as Kelly’s federal trial in Chicago begins this coming April.

Donnelly said Kelly’s trial would need a pool of about 200 potential jurors and she expects about to send out 500 questionnaires to pre-screen candidates.

“We need to leave enough time to get our jury in place,” the judge said.

Given Kelly’s past popularity in the Hip-Hop culture, he might be seeing an mostly white and/or young jury sitting on the sidelines. Just sayin.’

Kelly is currently facing charges which include trafficking, racketeering and child ography. The Donnelly expects the trial to last three to four weeks.