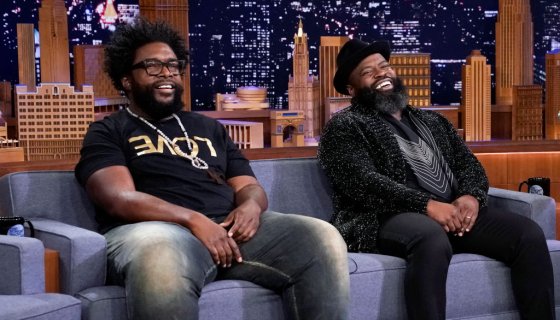 As members of , Ahmir “Questlove” Thompson and have been rightly heralded as one of Hip-Hop’s brightest acts and now they’re taking their talents to new levels. It was recently announced that the longtime bandmates and friends have signed a first-look deal with Universal Television Alternative Studio and Universal Television.

The new three-year deal will have the pair overseeing the development of a series of original programs, including both scripted and unscripted works, their Two One Five Entertainment brand. This adds to the Questlove and Black Thought’s ongoing relationship with NBC as members of Jimmy Fallon’s house band for his late-night television program.

“This deal is very important to us as we’ve been content producers and storytellers for our entire career,” Ahmir “Questlove” Thompson said a statement. “A significant investment from Universal Television Alternative Studio and Universal Television in our vision allows us to share these stories on a much larger scale. Tarik and I see this as the next chapter to our careers, and we are very involved in the entire process. I’m directing, Tarik is writing and we both are producing.”

“Many of our initial projects have been music-centric content, and one of our goals is to become the premiere hub for music storytelling – a safe space for these stories to be shared across a variety of platforms,” Tarik “Black Thought” Trotter added. “Eventually we will expand outside of music with our stories. However, as we all know, every story has a rhythm and Two One Five Entertainment will harness that rhythm and create well-produced, compelling content.”

It isn’t immediately known what Two One Five Entertainment will produce initially but Black Thought recently revealed that he’s been working on scripts while readying new solo music and continuing his NBC stint with the rest of the band. Questlove has also conquered the world of podcasting and continues to be a vault of music knowledge and information.

Two One Five Entertainment has already produced acclaimed works such as the AMC docuseries Hip Hop Songs That Shook America and will soon release a documentary under the name of Black Woodstock.