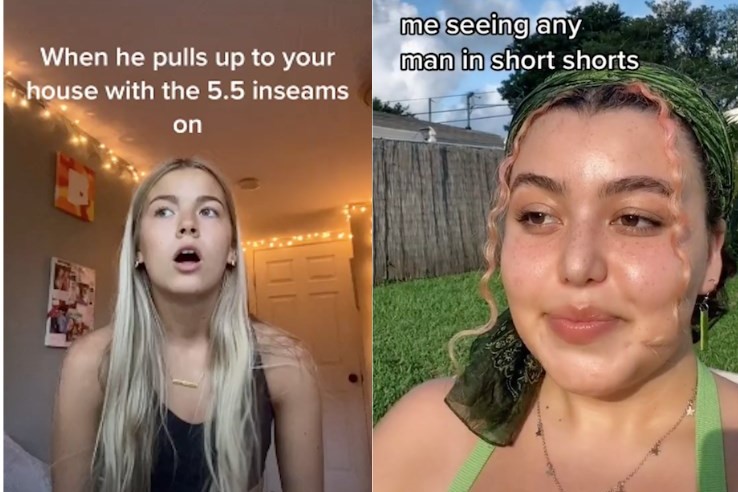 It all started with @sabrinaxrod. Back in July, the TikToker uploaded a video in which she extolled the virtues of the five-inch seam short. Pointing out a bunch of basketball and cargo styles with disdain, and eventually settling the camera on her boyfriend, who had pulled his t-shirt up to reveal his short-short-clad thighs. And then things spiralled. In a little over a month, #5inchseam has racked up just under 25 million views, with users around the world taking to the platform to thirst over the tiny, innocuous garment.

“If homeboy comes through in these, it’s quiet, but if he comes through in these,” says @goobistt a la Bella Hadid, biting her lip as a diminutive pair of Nikes flash up behind her, “homeboy’s gonna, like, get it”, while @carly.faro, having previously posted an extremely thirsty five-inch seam-centric video, created a quick explainer on the merits of the style for her in-the-dark followers, saying “five and a half can get it because your quads show a little more and I’m like yes sir some quad action”. And while Nike ranks high on the shorty-short thermometer, according to many, it’s a Lululemon style that finds itself in the god tier.

Short-shorts have been hot for a minute, with GQ touting them for 2019 and gay men far longer than that (keep reading), But it seems the thirsty TikToks from girls everywhere were the catalyst for guys finally coming round to the aesthetic (not that they’re always happy about it). But that doesn’t mean more factors aren’t at play in this, the hot five-inch seam short summer of 2020. Here, we take a look at some of the other influences that likely played their part.

The hazy, early days of summer 2020 belonged to one man and one man only. ‘Who?!’ we hear you cry. Two words: Paul Mescal. Provoking the kind of unquenchable online thirst not seen since Timothée Hal Chalamet burst into our lives and changed the way we looked at a peach forever, Mescal fever gripped the nation – nay, the world – when Normal People hit the BBC iPlayer. While many cited his silver, Elizabeth Duke-procured chain as the sartorial source of his infallible powers of seduction, the pull of his tiny, GAA football shorts is not, under any circumstances, to be disregarded. Cut to July, when Mescal was spotted IRL in East London, park tinnies in hand, in an equally minute pair of thigh-grazers – thus adding copious amounts of fuel to the increasingly horny five-inch fire.

AND WHILE WE’RE ON THE SUBJECT, S/O TO TIMOTHÉE TOO

It’s highly likely Timmy himself could also be a factor in the shorts’ popularity, given both he and on-screen lover Armie Hammer mooched about Northern Italy for the best part of Call Me By Your Name in teeny-tiny short-shorts of their own. With Chala-bae subsequently taking the spot of ultimate internet boyfriend in the eyes of teens (okay, fine, and 20-somethings) everywhere, is it really so surprising TikTokers are trying to convince your average guy to step out of his cargos and into something a little more thigh-baring? Further shout-outs go Harry Styles, who’s also hopped on the trend.

Remember the moment in The Devil Wears Prada when Andi gets sniffy about the cerulean sweater and Miranda brings her down a peg or two by coolly explaining to her how trends filter down from the upper echelons of fashion until they become something us mere mortals slip on? Well this is basically that. While plenty of onlookers gawked at the uber-skimpy short-shorts that strutted down the runway circa Fendi and Prada’s SS19 shows, now, a whole two years on, the trend is finally picking up steam.

WHERE THE GAYS GO, THE STRAIGHTS WILL (EVENTUALLY) FOLLOW

…even if it does take them approx. 1,784 years to catch up. As straight guys continue to ditch their bermudas in their droves, it’s highly likely the queer community is collectively raising an eyebrow, rolling its eyes, and tutting. Like cropped-tops, harnesses, and skirts before them, embarrassingly, short-shorts were previously deemed too femme for most heterosexual males to be seen dead in – and yet, in the year of our lord 2020, here we are. Seems to us like there’s a few apologies to be made, tbh.

♬ for yOUuu its quiet – livinlikelivvyy