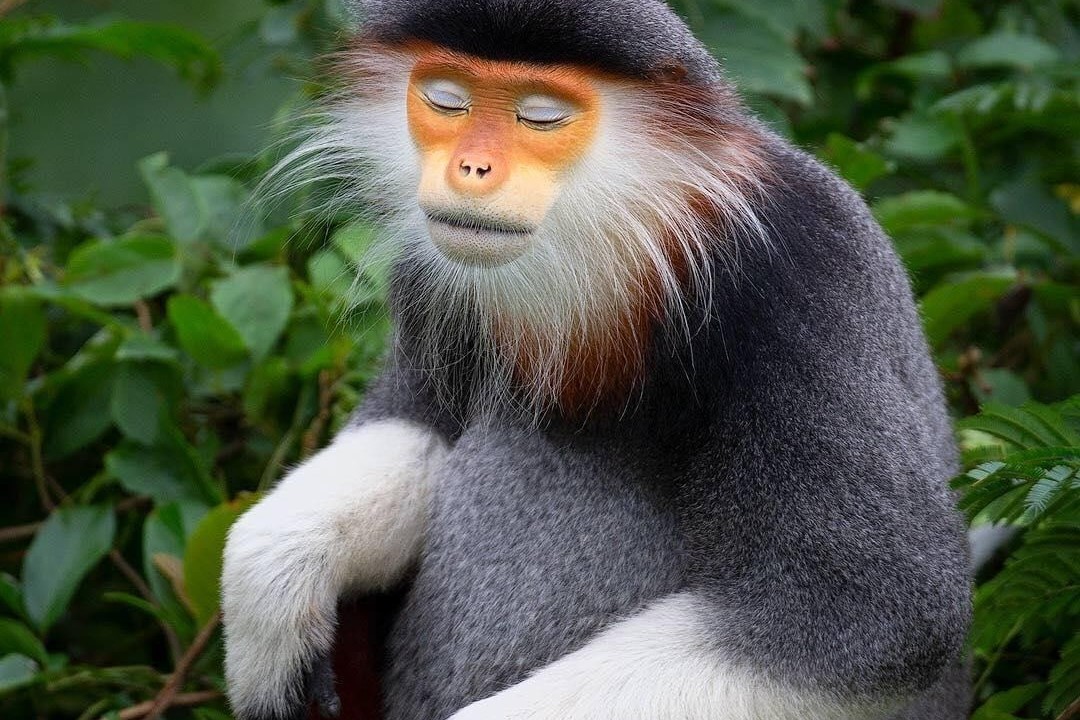 In the scenario you’ve spent any amount of time doomscrolling through the hellfires of Twitter this morning, it’s highly likely you’ll have stumbled across a photograph of a particularly impressive primate. Sitting among a patch of leaves, the little creature’s eyes are closed and its head is slightly bowed. It’s a powerful, peaceful moment that really makes you stop to contemplate the beauty and wonder of nature. That is, until your mind drifts to far more pressing matters – namely, ‘damn, WTF is he wearing?’ and, as Twitter user @sinaead so succinctly put it, “why did he flex so hard”.

From his chunky, tonal grey sweater to his rich burgundy tailored flares, the now-viral Red-Shanked Douc is cold-weather #inspo personified (wait: monkified?) – chic, cosy, and sophisticated, we wouldn’t be surprised to see him plastered across designer mood boards everywhere for AW21, or feel his influence on the runways of Paris and Milan come the new season. And that’s before we’ve even gotten started on his immaculately beaten face (which Dazed Beauty editor Dominic Cadogan confirms you can recreate at home using Colourpop’s Blue Moon palette, FYI).

why did he flex so hard pic.twitter.com/mqiNyjtg4T

Of course, he’s not the only social media-famous monkey with undisputable drip. In 2012, a tiny rhesus macaque showed off his cosyboi credentials when he got loose in a Toronto IKEA. However, where that particular fashion-focused primate definitely picked up his vintage shearling coat from the racks of Beyond Retro or similar, today’s Red-Shanked Douc is a different species altogether (lol, literally). Like, look at him – do you really think he’s going to be seen dead picking up any of IKEA’s mass-produced product, in that outfit? We think not.

With that in mind, we’ve done some deep investigative research in a bid to decipher who exactly our newly crowned drip god is wearing, while also giving you a little inspiration should you be thinking about trying out the look at home. Yes, I am expecting my Pulitzer any day now.

With its clean, understated lines, muted colour palette, and overall relaxed feel, the whole look screams Scandinavian superbrand Acne Studios in our humble opinion. But what we initially thought was a grey sweater in multiple shades of grey and a pair of tailored flares may in fact be an oversized t-shirt layered over a long-sleeved tee and some 70s style cord pants. If the monkey’s skateboard and a bucket hat bearing the Swedish label’s signature face emblem are lying just out of shot, our suspicions could well be confirmed.

Not only do we bring a loose aesthetic to you in this instance, but a whole series of lewks to back our idea up. As noted by AnOther mag’s deputy editor Ted Stansfield, the monkey’s directional ensemble bears an uncanny resemblance to a number of looks from Kiko Kostadinov’s vast archive, and we mean, we see it. Naturally, we’ve reached out to the London-based designer’s PR for comment (maybe).

Let’s just back it up a minute. While we’ve all seemingly latched onto the idea that this particular Red-Shanked Douc is a male, the female of the species bears no discernable differences when it comes to their tiny furry outfits, meaning he could just as likely be a she. With that in mind, we’re getting some heavy VB vibes from the grey and maroon combo – like, is it just us or can you totally see the former Spice Girl running down the runway to take her post-show bow or plastered across the Daily Mail’s sidebar of shame in a look not dissimilar to the one in question? That said, there’s no reason why a little guy monkey shouldn’t be dressed head-to-toe in womenswear. The year is 2020: gender ain’t nothing but a construct, baby.

Click through the gallery below to revisit that time we tried to ascertain whether or not Baby Yoda was wearing Margiela.