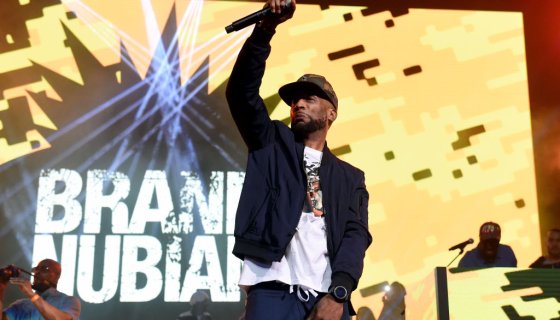 and locked horns years ago and that fight is still ongoing in 2020. After Slim Shady took a jab at the Brand Nubian rapper, Jamar fired back in his typically colorful fashion.

On Eminem’s latest album Music To Be Murdered By, the Detroit wordsmith gathered three-quarters of Slaughterhouse (sans the retired Joe Budden) on the track “I Will” and Em’s closing verse featured a long string of bars aimed at the God Jamar.

Enter my house of horrors with a thousand floors

Got a crown of thorns, but it won’t fit around the horns

But I’ma keep it a buck like a dollar store

Nothing means more than respect, so when I curse

You could say I swore to protect

My image, I have zero time or regard for

A never-was, been claiming rap when it’s not yours

If it was anyone’s house, G Rap and Rakim would be havin’ you mop floors

Run-DMC would be havin’ you cleanin’ sinks

Yeah, your group was off the chain, but you were the weakest link

Via DJ Vlad’s YouTube series, Jamar used choice terms to signal his long-standing distaste for Em. After humorously mocking Eminem’s “Stepdad” song and saying it was about him, Vlad dug into the “I Will” verse and it was on from there.

“I know what this b*tch ass said,” Jamar said. “And? And what? I’m still unscathed. Guess what? Mawf*ckas still ain’t listening to that in the hood. Nobody came to me in the hood and was like, ‘Yo, I just heard this Eminem song where he went at you.’”

Check out Lord Jamar firing back at Eminem’s “I Will” verse below.