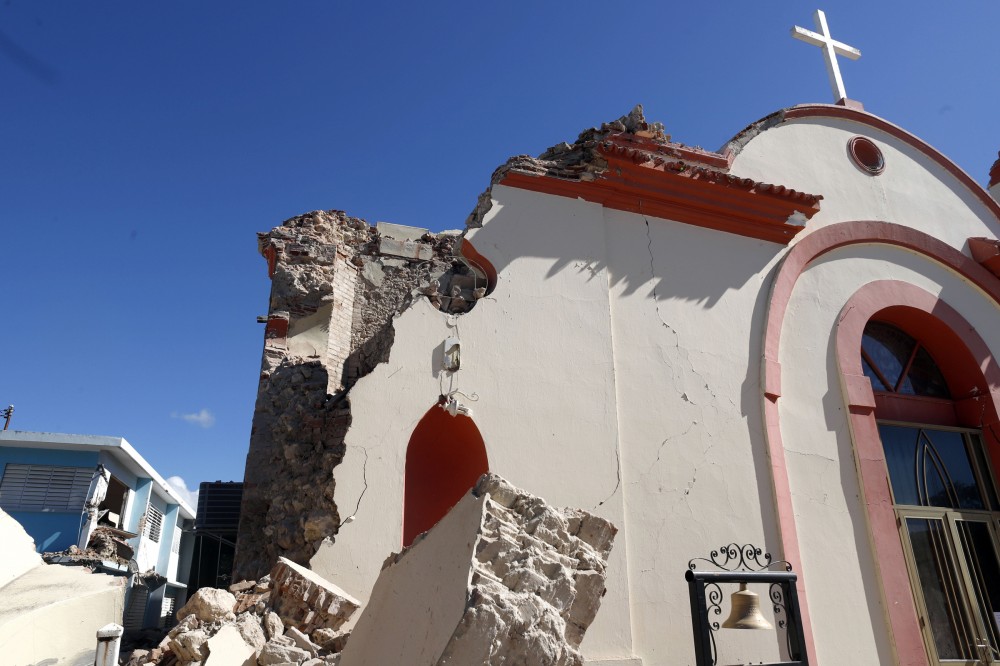 Since December 28th, 2019, Puerto Rico has been trembling with earthquakes. The shocks hit their fever pitch on January 7th, when a 6.4-magnitude quake was recorded near Peñuelas, a municipality on the island’s southern shore.

This series of tremors, which has numbered in the hundreds since December, has caused in excess of $110 million in damages, and left more than 8,000 Puerto Ricans displaced from their homes. It’s a traumatic state of affairs that has residents reeling from flashbacks to Hurricane Maria.

“This disaster is as much an emotional and mental crisis,” says Victoria Mendez, a development associate at the international nonprofit All Hands and Hearts. The organization is one of several groups working on the ground to assess total damage from the earthquakes; it has also helped provide more than 10,000 meals per day to displaced Puerto Ricans through its partner organization World Central Kitchen.

“There’s currently an estimated 5,000 people unable or unwilling to return to their homes, and there’s understandably widespread fear of being indoors, should another major earthquake happen,” adds Mendez. “With a 5.2 earthquake recorded January 15th, the ever-present threat of another larger earthquake complicates and delays recovery efforts. We’re continuing to monitor the risk and plan accordingly.”

Why Adam Sandler's 'Thanksgiving Song' Is a Holiday Classic

The Trump administration recently announced that it would release $16 billion in relief funds to the embattled commonwealth, but under austere conditions. This would require the Puerto Rico government to submit budget plans to its fiscal-control board; update its property registration database; suspend the $15-an-hour minimum wage for federally funded relief workers; and despite recurrent power outages, a complete blockage on funds for the island’s electrical grid.

The funding will be sourced from the $20 billion previously approved by Congress in September 2017, after Hurricane Maria first struck Puerto Rico. Yet in the two years since the budget was passed, the Department of Housing and Urban Development has disbursed only $1.5 billion of those funds. An additional $1.8 billion was allotted in government contracts to restore electricity on the island — but instead, resulted in the indictment of two FEMA officials on charges of fraud and bribery.

“They didn’t respond appropriately at Hurricane Maria,” said New York Gov. Andrew Cuomo to reporters last Tuesday, just prior to boarding a flight to San Juan. “The president showed up and threw paper towels into the crowd, and now we have an earthquake and continuing tremors, and once again the federal government hasn’t showed up the way they should.”

Unfortunately, the local government has struggled to contain the situation itself. Last Saturday, a stockpile of relief supplies was discovered in a warehouse outside the southern town of Ponce. Items like bottled water, diapers, propane tanks, and sleeping cots had been locked away since fall 2017, to the neglect of hurricane survivors, and two years later, earthquake survivors. Gov. Wanda Vázquez Garced — successor to the previously ousted Ricardo Rosselló — promptly fired Carlos Acevedo, the director of the island’s emergency management agency. On Thursday night, hundreds of Puerto Ricans gathered around La Fortaleza in protest of the Vázquez administration, citing the same deep-seated corruption they protested last summer.

“Remember NOT to DONATE money or food to government entities,” wrote reggaeton star-turned-activist Bad Bunny in an Instagram story, dated January 13th. “Let’s not forget that they let us die of hunger and thirst in Maria. Take advantage of solidarity groups to collect aid.”

In the spirit of El Conejo, here are some credible Puerto Rico-based groups to donate money, and if applicable, supplies to:

All Hands and Hearts — Founded in the wake of the 2015 earthquakes in Nepal, All Hands and Hearts works with existing local organizations to rebuild homes and schools in areas impacted by natural disasters. Several of its employees currently reside in Puerto Rico. You can make a direct donation to its Puerto Rico disaster-relief initiative here.

Hispanic Federation – UNIDOS — The Hispanic Federation “works with over 100 Latino health and human-services agencies to promote the social, political, and economic well-being of the Latino community.” Based in San Juan, its UNIDOS branch is fully dedicated to disaster-relief efforts in Puerto Rico. Donate directly to them here.

Suministros — An online database used to collect and distribute supplies among impacted neighborhoods, run by and for Puerto Ricans. Donors can see what supplies are needed and communicate with a representative from each community — from there they coordinate donations. Ideal for those presently on the island.

Paz Para La Mujer — This grassroots anti-violence collective is raising funds for deliveries of food and supplies. They have also begun installing solar panels for families left without power.

Charity Navigator has provided an extended list of organizations aiding in the recovery of Puerto Rico, with ratings on financial performance and transparency.