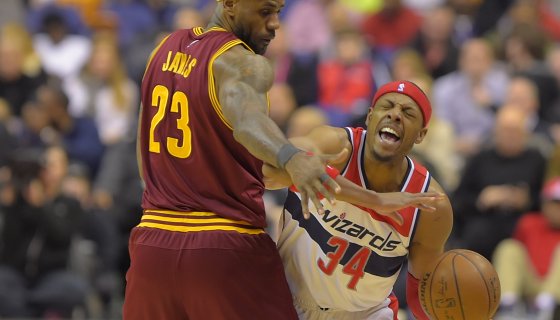 disdain for isn’t surprising, but a recent opinion from the Celtic’s legend has #NBATwitter clowning the retired NBA superstar.

The Truth is getting dragged up and down timelines for giving his honest opinion on who he thinks is the top five players in the NBA. Following ESPN and Netflix’s exceptional 10-part Michael Jordan documentary, analysts who have nothing to talk about for obvious reasons have been stuck on the barbershop debate of comparing Michael Jordan and LeBron James when it comes to GOAT status.

During a recent taping of NBA Countdown, Paul Pierce let it be known that it’s most certainly not LeBron James. In fact, according to Paul Pierce, James is not even a Top 5 player in the NBA.

“Bill Russell built up the organization in Boston. He should get way more credit than we give him, and a lot of times, he gets left out of the conversation,” Pierce said. “So in saying that, Kareem, Magic, Jordan, Tim Duncan, Kobe, Bird. These guys are all-time top 10 players who either helped build up their organization or continued the tradition.”

Pierce believes that Jame didn’t do that with any of the teams he was on.

“He went and put together a team in Miami, and in some ways, he came back to Cleveland to put that team together, and then he went to the Lakers, where a tradition has already been made. And we don’t know, you know, that’s still to be continued. So in saying that, that’s my argument.”

As with any of Paul Pierce’s hot takes, his NBA brethren Jalen Rose, Jay Williams, and co-host Maria Taylor definitely didn’t agree with him.

Neither did Twitter, you can peep all the well deserved jokes sent The Truth’s way in the gallery below.

Paul Pierce doesn’t have LeBron James in his top 5 list of all time NBA players. pic.twitter.com/4Yq2IBa4zU

Paul Pierce since becoming an analyst 👇

• Claimed he had a better career than D. Wade

• Said he was a better shooter than Klay

Might be time to change his nickname from “The Truth” to “A Lie” pic.twitter.com/1SW2f1Q65l

Never forget, Draymond to Paul Pierce: “they don’t love you like that. you thought you was Kobe?”😂💀pic.twitter.com/RFS70vWHn8

"I don't agree with Paul Pierce due to his rationale. To say LeBron isn't Top 5 because he didn't build a dynasty? You look real petty, bruh. Do you realize LeBron is not a GM? Some players go to teams where the front office is incompetent."

Paul Pierce is still mad about this. pic.twitter.com/fpsiJsMHqZ

The only time you read or hear of Paul Pierce is when he talks about LeBron James. Which is probably why he gets so angry and starts talking about…LeBron James

Everytime Paul Pierce Resurfaces, Just remember people had to actually it him in his place, “You not Kobe” pic.twitter.com/krmtoFla5Q

Y’all really be getting worked up over those player rankings. Paul Pierce could rank Lebron 300th and I wouldn’t give a shit. It’s bait.

Paul Pierce left LeBron out of his Top 5 players of all time, so might as well bring this video back pic.twitter.com/1Db07jS5Xg

Never forget when Paul Pierce threw his headband in the stands after a game and the fan threw it back 💀 pic.twitter.com/Jtai3zsTfE

How we see this image vs how Paul Pierce sees this image pic.twitter.com/wif4tCavZb

…so I present to you the roast of @paulpierce34🤬 pic.twitter.com/CeCnoHY8z1

Like I said before…WHO THR FUCK IS PAUL PIERCE? he looks awfully familiar to that guy for the Celtics that shit himself mid game and then faked an injury to save himself from embarrassment https://t.co/FeGt7wZbvk pic.twitter.com/YSWdNLbCY3