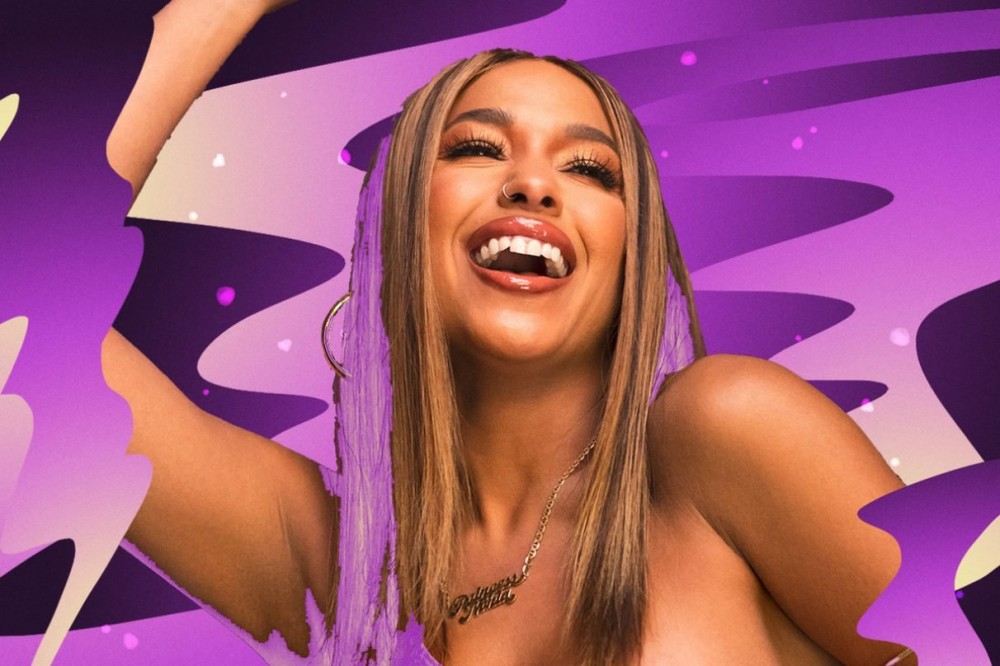 Destiny Frasqueri (a.k.a. Princess Nokia) plays cards with her dad while we talk over the phone. “Stop falling asleep! Wake up!” she says at one point. At another, he chimes in to support a point she’s made.

Elated at our congratulating her recent collab with NYX Professional Makeup, Princess Nokia says thank you, and adds, “I wanted to do something that was my signature aesthetic.”

The four lip kits–a high-shine lip color paired with a slim lip pencil–are currently out of stock on the brand’s site. Yesterday (Jan. 31) they dropped on Ulta.com, and there’s still some available–as of right now, at least. They’re selling fast online and in stores.

But of course this collab is flying; anyone could have predicted it. Princess Nokia is a style icon–a largely unheralded one, really. Switching from masc to femme looks or blending both, she epitomizes the idea that nobody should feel pigeonholed by one particular aesthetic.

Very hands-on in the creation of the lip kits, Frasqueri says she culled inspo from the aunties and babysitters who cared for her as a girl, back in the ‘90s. It wasn’t until later, as she moved into adulthood, that she realized how signature and special their aesthetics were.

These women had a significant impact on her own style. “They were really the flyest women I knew,” Frasqueri reflects.

Launching a collection with NYX is a personal milestone, as she’s gushed on socials, because she’s been a fan of the brand for decades.

The lip kits are versatile, like her style–and her work as an artist. Princess Nokia will lean emo then hip-hop or blend both, talking colonialism or haters or spirituality. She’s released ballroom-ready songs like “Versace Hottie” or immensely spiritual tracks like “I am Free.” This disregard for genre vicissitudes–that is to say, basically, Princess Nokia does what she wants–is a trait for which she’s been both hailed and criticized.

She’s got thoughts on the latter feedback, the negative kind that’s not even always about her music, but also includes attacks on who she is as a person. Art is a “safe space,” she says, and it’s less so when the “entitlement of opinions of others” comes into play.

“Just because artists amounted to positions of privilege or comfortability, it doesn’t make us any less susceptible to pain, depression or abuse. I think a lot of artists are suffering from emotional abuse from people, actually,” she says. “That’s one thing that I think is very serious…I don’t think enough people talk about these artists who give so much of themselves and I think are suffering a lot–including myself.”

Like so many people around the world, the pandemic has forced a slow-down in her career: 2020 would have been another year of touring, likely performing material from her double LP Everything is Beautiful/Everything Sucks, released last February. Virtual performances are all she can do in that department, currently.

“Doing the livestreams has been good, but they’ll never amount to public performing or anything like that,” she says. “But I try not to complain. That’s what life’s adversity has taught me: to roll with the punches.”

Performing live is her “favorite thing in the world,” she says. But a respite from touring was, in fact, necessary. And it’s likely that she wouldn’t have taken a break had COVID-19 not (justifiably) halted everyone’s day-to-day.

“As someone who has been touring for almost four years straight, touring on and off, and traveling a lot for about seven years, I actually really needed the rest,” she says. It’s been about a decade since Princess Nokia began releasing music publicly.

Learning to be kinder to herself while not working came with accepting the impossibility of touring right now: “I learned a lot about perspective, about being a workaholic, and the boundaries I need to [set] for myself. I push myself a lot. Since my musical journey, I’ve done a lot. I feel like I’ve just been going, going, going. I’ve never stopped.”

In truth, she still hasn’t stopped. It’s not as if this NYX collab appeared out of nowhere. It seems, instead, that she’s diversifying the avenues through which she engages with her public, through which she offers her art.

Having recently shelved Smart Girl Club, founded several years ago as a channel for women-empowering DIY art, podcasts and more, Princess Nokia is now switching her focus to After School Special. Taking the same Instagram account that was once Smart Girl Club’s, this new venture, a digital magazine and art forum, is where Princess Nokia’s photography, collages, poetry and other creative mediums will find a public home. “I’m going to start posting next week and start sharing these lovely photos and works,” she says.

Mid-sentence, she says to her dad, “Boom!” It seems she’s played a good hand.