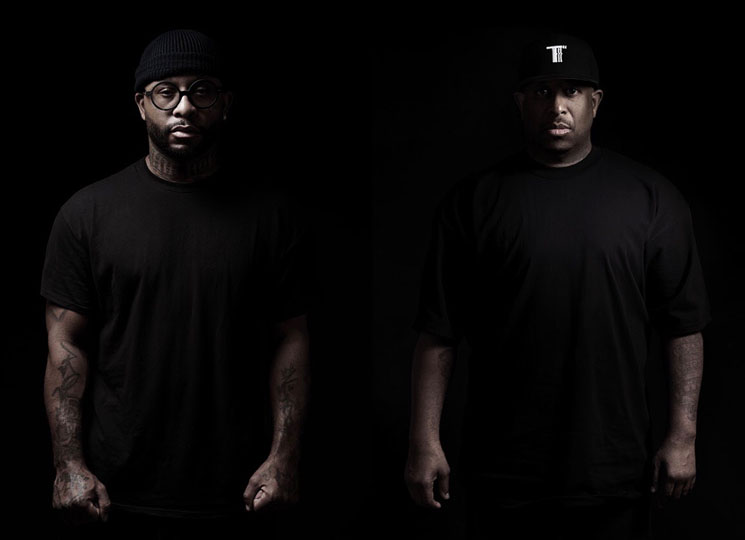 Call it confessional rap — a cathartic style spitting that makes famously rugged, veteran Detroit MC Royce 5’9″ sound downright woke and socially conscious on PRhyme 2 highlights like “Made Man,” “My Calling” and “Everyday Struggle.” To achieve that, he doesn’t use preachy or righteous rhymes, instead opting for soul-baring self-deprecation.

Having his PRhyme partner DJ Premier back those bars up with evocative instrumentals certainly doesn’t hurt, and neither does teaming up with heralded MC du jour Rapsody on key track “Loved Ones.” Together, they weave a harrowing lyrical tale infidelity, heartache and regret on that PRhyme 2 standout.

“I’ve wanted to work with Rapsody for a long time, and I want to continue working with her,” Royce tells Exclaim! “For ‘Loved Ones’], we talked about there being a double standard when it comes to loyalty.” To better explain that track’s concept, Royce uses a pointed analogy: “Primo is one my closest friends, and never in a million years, not in my drunkest, highest moment, would I ever have sex with his girl. I’d never stab my friend in the back like that. But on the flip side: I’ve cheated on my wife a million times. So what’s really the fuckin’ difference? Is he more my friend than she is?”

Tough as such hypocrisy may be to face, Royce and Rapsody delve into that thorny theme head on. And after Rapsody spits about deadbeat dudes wounding their ladies’ spirits, Royce rhymes about such indiscretions with true-to-life accuracy. Surprisingly enough, he had little trepidation about recording such warts-and-all rhymes, explaining: “I go to therapy weekly now. So that’s why I’m able to be a lot more reflective and transparent in my rhymes. I’m not afraid, there’s no shame. From there, it’s easy to move forward, because you’re not looking at the past no more.”

It’s a cathartic process that endears Royce to his PRhyme cohort DJ Premier, a legendary producer who has worked with Jay-Z, Kanye West, Notorious B.I.G., and course Guru as the pioneering hip-hop duo Gang Starr. Indeed, PRhyme is the most extensive collaboration Primo has embarked on since Gang Starr, and the DJ tells Exclaim! that that’s in part because Royce is “very hard on himself, in the same way I’m hard on myself, because I want the best. That’s why it’s so easy to click with Royce in the studio.”

Premier adds that he’s overjoyed to see Royce finally get widespread props their critically acclaimed PRhyme releases, explaining: “Who would’ve thought you’d get NBA star player] LeBron James and Hamilton writer and star] Lin-Manuel Miranda texting him, all the bigwigs giving him love. He deserved it years ago, but whether they’re late or on time, it’s just good to see everybody giving it up for him, for stuff he created from his own blood, sweat and tears.”

That current success can seem surreal to Royce, as he raps about trials like his marital woes and his struggles with substance abuse on both PRhyme albums. After all, he recently celebrated five years sobriety, after years using booze as a studio crutch. “If you don’t write unless you put substances in your body, eventually you’re going to become dependent, and that’s pretty much it,” he says, before quickly adding: “I’m not trying to preach and I’m definitely not judgmental, because I’m not in a place to judge. Every piece music I ever do is just appropriate for the moment I’m in. It’s just a part my growth as a man.”