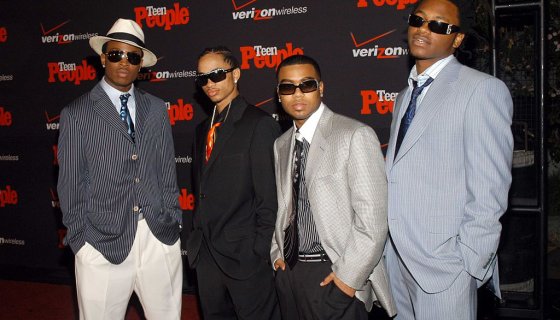 first made their major-label debut back in 2005 with the gold-selling Bluestars album, featuring the “Grind With Me” and “Your Body” singles.  After Pleasure P split with the band in 2007, he has since rejoined and now the quartet has a new song “Body” that has R&B Twitter excited about their long-awaited reunion album.

Pleasure P, Baby Blue Woaaaa, Spectacular, and Slickem are back in formation, delivering their -tinged vocals as they did over 15 years ago. The group dropped the singles “Puddles” and “Good Girlz” in 2015 and 2017 respectively as a little chatter of a new project was ongoing at the time.

With “Body,” Pretty Ricky has returned to the sound that got them some smash hits such as the forementioned drops, but also “On The Hotline” from the group’s 2007 Late Night Special album. The new single was released last week while the group is currently on a nationwide tour.

On Twitter, the group’s name was trending with fans discussing the new drop and reminiscing over Pretty Ricky’s earlier hits. We’ve got those comments below.

listening to the new Pretty Ricky song like pic.twitter.com/o3AI3f9HRn

Young MA: the game lackin cause it's lackin R&B cuz everything tryina sound the same, we need to bring r&b back to balance the game

Me welcoming pretty Ricky back pic.twitter.com/Ep9DaAuTH6

New Pretty Ricky music? Time to oil up the hips and knees. pic.twitter.com/DpdhNZcCSl

Pretty Ricky made a comeback & actually killed it omg pic.twitter.com/V7ATjMaYw8

I was in the 5th grade listening to Pretty Ricky….. pic.twitter.com/z2ySNWnxrl

Women: I’m so over Pretty Ricky

Pretty Ricky is trending and for good reason. Their new song is 🔥 and reminds me of early 2000s all over again 😭 #Body pic.twitter.com/KUPTVuC5Nx

Pretty Ricky is trending and I can’t….but at the same time I can!! 15 yr old me in my room coming back like 😂 #prettyricky pic.twitter.com/Osujd47HdO