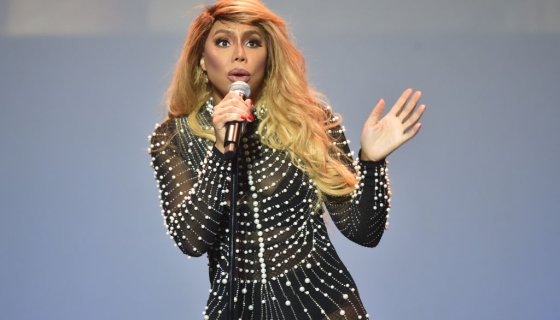 We must warn readers that the news within might be triggering to some so proceed carefully. After news that singer and media personality was rushed to a hospital after a possible suicide attempt, fans on Twitter are rallying around her while also blasting those who have mocked her in the past.

Braxton, 43, was reportedly found unresponsive in her Los Angeles residence by her boyfriend, David Adefeso according to a report from The Blast. The outlet adds that Adefeso told responders that Braxton had been drinking and ingested the prescription pills, although what type they were hasn’t been reported as of yet. Braxton was rushed to a downtown Los Angeles hospital where she remains in stable condition but still not responding.

Adding to the speculation, Braxton has been embroiled in a public spat with We TV regarding her contract and reality series, with the outlet stating that she is unhappy with the network’s promotion of the show and the image they’re pushing of her.

Along with her boyfriend, Braxton hosts a live YouTube series titled Coupled & Quarantined, but she postponed the latest episode ahead of the incident, telling her fans that she wasn’t feeling her best.

“Hello Ya’ll Unfortunately, Your girl Tamar is under the weather today and not feeling well so we need to postpone today’s show (Don’t worry it’s not Covid) We’re sad because we had a great show lined up for you today, but next week’s show is going to be even bigger and better,” read Braxton’s social media statement.

This news comes on the heels of reports that Nick Cannon has been cryptically tweeting about death, sparking concern amongst fans as well. On Twitter, fans are hopeful that Braxton will make a speedy recovery. She is currently under 24-hour watch.

We’re putting out positive energy in the air for Tamar Braxton as well.

These fake ass statements about talking about mental health be blowing me because y’all bully Tamar everyday online & her family & friends always look to be stabbing her in the back. What y’all expect someone’s mental health to be like? BW do have feelings.

All of y’all who laughed at her, clowned her and called her a “muppet” can keep your fake sympathy to yourselves.

Black mental health is important. It needs to be discussed. People go through things in silence & by themselves. Lord keep them safe.

Keeping Tamar in my prayers tonight. 2020 is really trying it. 😞

Don’t judge Tamar. Suicide attempts are nothing to take lightly. Just mind your business and pray for healing. pic.twitter.com/kLQRDYC1vw

Lord PLEASE bind up that demon of depression & suicide! Prayers for everyone and anyone who feels like giving up…STAY with us🙏
May God keep & cover Tamar and Nick.

there is spiritual warfare going on

May God cover us all with His protection …#Pray

Tamar better wake the fuck up in that hospital 😡 I swear if she dies me & her are going to fight. Overdosing damn Naya dies , meg getting shot , now Tamar 😭 plus many other deaths whew pic.twitter.com/lZi0KNAvGR

chile wtf is going on !?? i’m seeing this stuff about nick and tamar . lord pic.twitter.com/eGsnTroqT9

Tamar has been one of my favorite artists for YEARS so this really hits different. I hope she’s ok & eventually gets the help she needs to recover from whatever she’s going through.

Praying for Tamar to pull through 🙏🏾

Waking up to the news of Tamar’s hospitalization is hard.

Whatever it is, I’m praying. I’m praying she pulls through, knows she is loved and can find the light.

I’m praying for everyone for whom life’s circumstances are too much. I pray you can find a little piece of hope.

Suicide doesn’t end the chances of life getting worse, it eliminates the possibility of it ever getting any better.

Praying for my friend Tamar Braxton. 🙏🏾