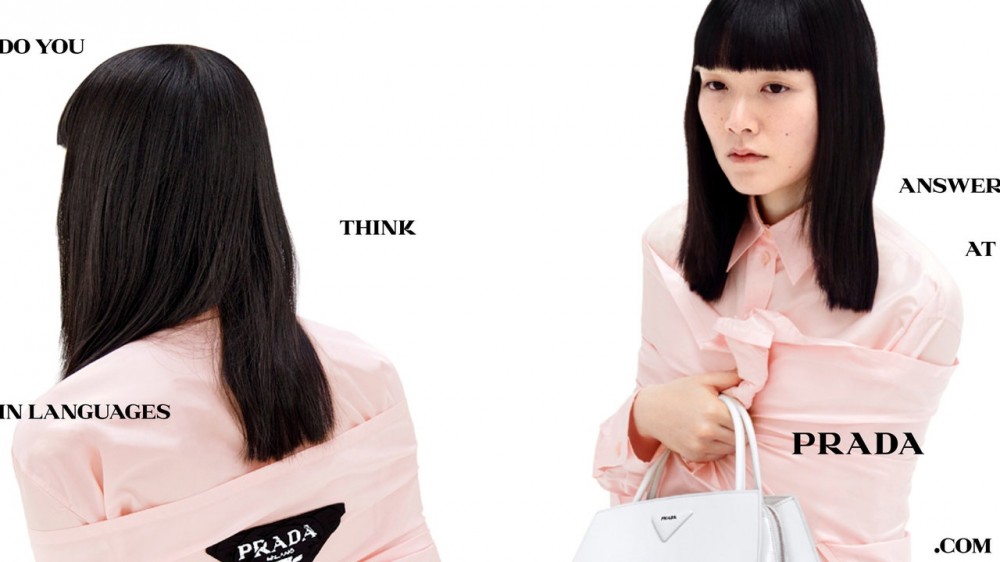 The days when models were considered blank slates are over. Today’s runway stars are a well-rounded bunch, and no one illustrates that better than Prada’s latest campaign star, Taira. The rising star from Hokkaido, Japan, is front and center in the spring/summer 2021 ads, creative directed by Ferdinando Verderi. The minimalist images and accompanying film highlight the beauty of the 25-year-old star. Defying the “scouted in junior high” stereotype, Taira entered the industry last year with a bit of life experience. “I’ve been fortunate in that sense, and I feel grateful,” they shared on the phone from London. “Modeling has been a great way to explore identity and parts of myself even further, to delve deeper into things that intrigued me and think deeply about issues I studied while at university.”

The intro to modeling was unexpected. Asked by a few art student pals to pose for their projects while part of a year-long exchange program at London’s Goldsmiths College, Taira was scouted officially upon returning to Japan and is now signed to Ford Models in New York. A media, communication, and culture major while in college, their pre-fashion plans were to dive deeper into academia. “I was studying identity politics and gender studies, specifically,” says Tania. “Primarily with media studies, semiotics, and identity, which I was quite interested in. I took several modules related to ethnicity and gender, and since my school is an International one, I was able to transfer the credits I’d earned in London. While I studied sociology and anthropology, as they were relevant to my interests, then I completed the dissertation back in Japan.”

Understanding the intricacies of identity was important for Tania, who does not associate themselves with any gender labels. Instead of being defined by pre-existing definitions, they sought to determine who they are on their terms. University was an essential part of that journey of self-discovery. “I came into cultural studies with questions about what it means to be a gender, a nationality, or an age,” Tania explains. “Whenever you introduce yourself, those are the things that separate us. It seems to me that the labels limit us and keep producing conflict between these invisible borders. I do not like to restrict myself with stereotypes and stigmas by actively choosing an identity category for myself.”

With much of fashion still beholden to categories of gender, size, or nationality, entering the modeling industry provided its own education on identity. “There have been moments that have challenged me to reflect on how I identify myself,” says Tania. “It’s also a good opportunity because it also allows you to look at how our culture works, our relationships with garments and fashion.” Transforming from shoot to shoot has also been illuminating. “There is this performative element to modeling; you’re often playing a character or representing the creative team’s ideas,” says Tania. “Our society still relates to those dual categories of male and female, and in a way, through my career, I can examine other possibilities.”

In a way, Miuccia Prada and Raf Simons’ first collection as co-creative directors was a fitting debut for Taira. A merger of talents that represented a new way of thinking about fashion collections, the show’s cast had to align with the revolutionary nature of the show itself. Selected by Ashley Brokaw, the lineup focused solely on modeling’s next generation. For Taira, the show was a once in a lifetime experience. “I can’t express my gratitude enough,” they say. “I’m lucky to have been a part of the very beginning of something so fresh and innovative, especially as an exclusive and for my very first show.” Given a birds-eye view of the pre-show process, Taira was also inspired by the talent they saw around them. “It was incredible to be able to witness the craftsmanship and teamwork that goes into these events,” they say. “Normally, that side of things is invisible to the public. It was all impressive. The clothes, the scale of the production. They projected our names on the screens [during rehearsals], and each model could show their personality. There was an appreciation of us as individuals, which was amazing as well.”

Post-show and campaign, Taira is focused on what lies ahead. Fresh from working with photographers like Campbell Addy and Nadine Ijewere, they hope to collaborate with even more unorthodox image-makers. “They’re pushing boundaries within the industry,” says Taira of her creative collaborators. “I had a chance to be on set with Tim Walker [recently], and it was just a life-changing experience. I had the pleasure of having a wonderful deep conversation with him and discussing the way he thinks and how he approaches his work.” In the interim, Taira hopes that their presence in fashion leads to something meaningful. “I want to show the younger generation who is going to lead the world one day that there are no rules when it comes to identity,” they say. “You don’t have to put yourself in a box to make the people who don’t understand you feel comfortable. Change is rarely a comfortable experience, but through gradual change, people become more aware of what isn’t working and what we need to tackle. So ultimately, I’d like to be a part of projects that make our world a better, more interesting place.”