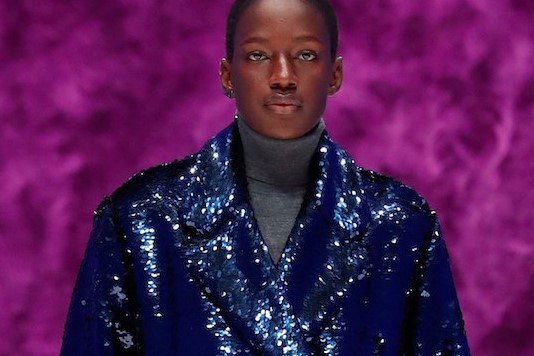 Mrs. P and Raf gave us a glimpse of post-lockdown raving (and now we want more)

We’re three weeks into fashion season and powering on through to Milan. New York? London? Distant memories, despite only wrapping up a couple of days ago – that’s fashion, baby! With Kim Jones dropping his debut ready-to-wear collection at Fendi yesterday, and Moschino AW21 debuting its latest offering earlier today, right now there’s the small matter of a Prada show to attend to. Here’s everything you need to know.

From the White House to NYFW: Ella Emhoff hits the runway

MATTO is the Parisian zine inspired by clubs, the city, and its constraints

THOSE UBER-LUXE FLUFFY CARPETS WERE BACK

The Rem Koolhaas-designed show space from the label’s AW21 menswear show last month was still very much in place, with cool sage green marble floors offset by thick, luxurious carpets in sugary pastel shades that climbed the walls. Truly, my kingdom to lie face down in one of those and roll about. Miuccia?

THE COLLECTION PICKED UP WHERE MENSWEAR LEFT OFF

Models with severe, slicked back hair in button-down shirts, roll-neck tops, and slim blazers stormed around the showspace, sleeves pushed up to their elbows like they had places to be. Elsewhere, the long-johns Raf and Miuccia proposed for the Prada boy this season were back with a vengeance, as seen in a series of retina-obliterating clashing patterns and layered under fluid, all-in-one jumpsuits and empire-line dresses punctuated with yet more tiny triangles. “There was a sense of connecting men and women – the masculine in women and the feminine in men,” Simons explained in the now-traditional post-show de-brief (more on that later).

…BUT IT WAS BUSINESS UP FRONT, PARTY AT THE BACK

As the show progressed, androgynous suiting made way for a series of sparkly, sequinned looks. Boxy dresses scattered with shimmering discs were layered under tactile, fluffy coats in artificially bright hues, while shaggy faux fur wraps were lined with iridescent fuchsia embellishments, held close to the models’ chests in that unmistakable, oh-so-Prada way. The pièce de résistance, however, was a shimmering, cocoon-y opera coat in a vivid, disco blue. One kidney up for sale, please enquire within.

THE SHOW OFFERED SNIPPETS OF A POST-PANDEMIC RELEASE

In the post-show panel talk, Simons explained the collection came from a place of optimism, as we edge further towards a long-awaited release from life under lockdown. Flashes of models dancing under strobe lights gave us a glimpse as to what the future might hold, while the uber-tactile offering itself beckoned tantalisingly for us to touch. Pulsating throughout was a techno soundtrack that came, once more, from electronic producer Richie Hawtin.

Having previously invited students from around the world to submit questions for the post-show Q&A, this time around, Miuccia and Raf were joined via Zoom link by a panel of collaborators and admirers. With Rem Koolhaas, Richie Hawtin, and Hunter Schafer all on the line-up, also checking in was self-proclaimed Prada stan Marc Jacobs. Asked by host Derek Blasberg what ‘The Prada-ness’ meant to him, the designer didn’t mince his words. “It’s Mrs. Prada,” he revealed, and tbh… yeah, agree.