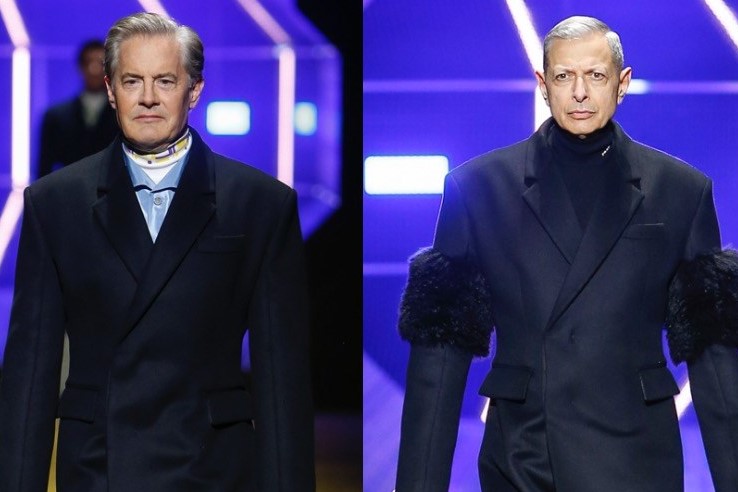 A damn fine Milan fashion moment all in all

It was kind of inevitable.

After pledging his allegiance at the altar of Prada across the course of the last four or so years, everyone’s fave internet zaddy Jeff Goldblum finally made his debut on Mrs P and Raf’s runway in Milan – because life, as we all know, finds a way. Though there were whispers that Goldblum may make an appearance after the house posted a short video of him on Instagram, heads snapped around and necks craned (as this writer audibly gasped) as the iconic actor swaggered out from the brightly-lit, intergalactic tunnel that provided the backdrop to this season’s menswear show, dressed in a dark, impeccably cut trench trimmed with shearling armbands and hem.

But this was just the end of the show. Equally brilliant was its opener, Twin Peaks’ legend Kyle MacLachlan, who (fire) walked the the runway in a damn fine (sorry I’ll stop now) bold-shouldered double-breasted coat, geometric patterned polo neck, and louche, wide-legged trousers. Where Goldblum has long been vocal about his love of Prada, MacLachlan was outed as a Raf Simons stan when he showed up front row at Calvin Klein’s AW18 show. It soon became clear the feeling was mutual, as the Belgian iconoclast punctuated his emotional AW19 collection with stills from Blue Velvet featuring Laura Dern and MacLachlan himself.

With Agent Dale Cooper and Dr Ian Malcolm bookending proceedings, there was yet more movie magic to be had throughout the show. Also walking this season were the likes of Asa Butterfield, who you might just know from a little show called Sex Education, Moonlight’s Ashton Sanders, We Are Who We Are’s Tom Mercier, Peckham’s very own Damson Idris, and Thomas Brodie-Sangster, aka the little boy from Love Actually who’s now all grown up. The whole thing harks back to Prada’s legendary AW12 show, when actors including Willem Dafoe, Adrian Brody, and Gary Oldman all made an appearance on Mrs P’s runway.

The collection itself was a celebration of working uniforms and the men who wear them – from those going out to work in more relatable roles, to the Hollywood actors who portray them – and turned the act of putting one’s uniform into an event. With most of us locked down for long stretches of time since early 2020, and plenty more continuing to work from home as the world opens up, Mrs Prada and Simons this season made a case for getting dressed up for a day in the office (or elsewhere).

Diving deep into the Prada archives, the offering was subtly self-referential, as the duo reinterpreted boxy coats with formidable shoulders in scarlet and black high-shine leather, heavy wool trenches finished with yet more faux fur and shearling cuffs and trims, and slick, slightly louche suiting offset by delicate embellished knitwear. Utilitarian boiler suits  in techy fabrics were also in the mix for AW22, which is probably good news for those looking to slip into an all-in-one look but balked at previous knitted skintight iterations.

Despite what Diet Prada and their surface-level knowledge of fashion history may have suggested post-show, the Prada-ness radiated throughout – and pretty much proved that Miuccia was the blueprint for plenty of what we’re seeing on catwalks around the globe right now.

Revisit our interview with a Prada-clad Jeff Goldblum here and click through the gallery below.