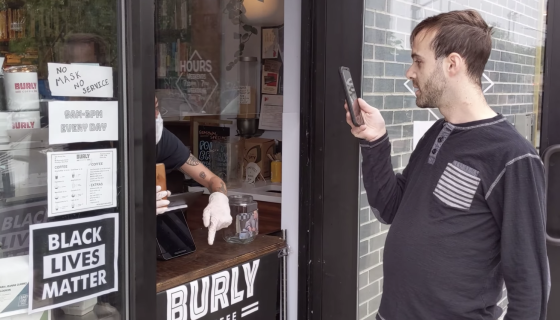 Just when we all thought , a colonizer from God knows where took issue with something that wouldn’t be an issue during the days of Big Poppa.

This week in what was once known as “Do or Die” Bed-Stuy, a Trump-supporting neighborhood transplant, Abraham “Avrumy” Knofler took issue with a “Black Lives Matter” sign being posted at the Burly Coffee/Better Read Than Dead cafe in Brooklyn. “Avrumy” demanded that the sign be taken down before trying to educate the worker and everyone in attendance that “all lives matter.”

Holding up the line and claiming that the BLM sign “caused the whole problem” of people arguing outside the shop’s window, the seemingly 6-months pregnant Knofler had no problem recording his entire rant about the sign being racist as he spoke in a foreign accent (can’t make this stuff up in 2020).

According to the Gothamist, Knofler confirmed that he was “protesting” at the coffee shop but claims he didn’t want them to take the sign down even though he bluntly said so a few times.

After looking at his Twitter page, the Gothamist found that not only is his page riddled with pro-Trump posts, but he’s also a Coronavirus denier who believes the current pandemic is a hoax using the hashtag “covidBS.”

This all makes sense as the man took offense to the sign and said “Why do I need a mask” when asked about his lack of one. Eventually Knofler went on to chant “all lives matter” because, well, he’s a burger.

Burly Coffee addressed the situation on their instagram page and revealed this isn’t their first run in with the foreign troublemaker while reiterating that they firmly stand behind the Black Lives Matter movement.

We strongly stand with Black Lives Matter and applaud our staff for standing up to the blinding hate that has appeared at our door. Unfortunately, this was not an isolated incident with this person and our priority continues to be the safety and well-being of our staff. We are overwhelmed by the generous support of our staff our Venmo Tip Jar. The baristas that experienced this hatred will receive the tips directly.  Burly will be making a contribution in support of the community we love and are thankful to be a part of. #supportbedstuy #bedfordstuyvesant #bedstuylocal #baristadaily

This would’ve never happened during the era of Timberlands and army fatigue outfits, but nowadays it’s crocs and linen shorts running around like it’s all good in the hood. SMH. We miss the old BK.