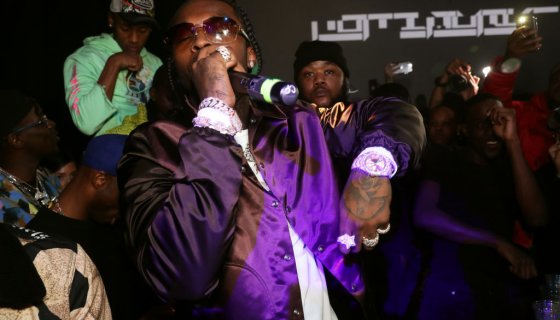 would have turned 21 today and while those who took his life , the excitement over his debut studio album feels bittersweet. A new deluxe version of Shoot For The Stars, Aim For The Moon was released today (July 20) and Twitter is gathered in saluting The Woo.

Bashar Barakah Jackson was born today in 1999, thus the release of the deluxe studio album dropping as a means of celebration. An additional 15 tracks are part of the new project with three of that grouping being remixes of songs that appeared on the previous release.

Among the features on the additional songs, Jamie Foxx shows up for “She Feelin Nice” while fellow Brooklyn Drill star Fivio Foreign gets back-to-back appearances on “Showing Off Pt. 1” and “Showing Off Pt. 2.” Young Thug and Gunna show up on the track “Paranoia” and A Boogie wit da Hoodie” lends his vocals to “Hello.”

Across Twitter, fans of Pop Smoke have been praising not only the debut but also the deluxe package, and it’s fair to note that fans can expect plenty more music as Pop recorded tracks at a rapid clip with hundreds of tracks rumored to be sitting in the vault.

Check out the reactions to the Shoot For The Stars, Aim For The Moon deluxe version below.

Today we remember the life of #PopSmoke on his birthday. Our thoughts and prayers continue to be with his family and friends. Comment your favorite song of his below 👇🎂🙏 #RIPPopSmoke pic.twitter.com/ErRo6HnWCF

Pop Smoke and Fivio Foreign on the deluxe #PopSmoke pic.twitter.com/Oi37rofCrk