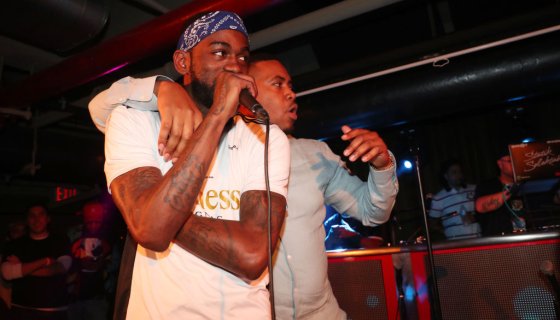 Kiing Shooter, a rapper signed to both Nas‘ and his brother Jungle‘s Street Dreams imprint, reportedly died from complications arising from . Reports are coming forth that police shut down a vigil in the rapper’s Queensbridge neighborhood, shutting down the event in the process.

The New York Post reports that the vigil for Shooter held this past Tuesday in Queensbridge Park was visited by local police, with the outlet saying around 50 people were in attendance at the event. Late last month, Shooter posted an image of him inside a hospital getting treatment for an undisclosed illness but it’s being reported that he possibly contracted COVID-19 while hospitalized.

From Legacy.com’s obituary for Kiing Shooter:

Kiing Shooter, born William Daniels, got his start releasing freestyles with fellow NYC rapper Dave East, including a feature on East’s 2018 single “Traumatized.” His first mixtape received notice from rapper Jungle, who signed Kiing Shooter to his Street Dreams label in 2019. In March of 2020, Kiing Shooter released his final material, the single ”Losses” and the mixtape “Still Outside” on Street Dreams and Mass Appeal. The mixtape included features from Mac Dre, Dave East, and others. Kiing Shooter had been hospitalized for liver problems in the days before he became sick with COVID-19.

Both Nas and Jungle posted on Instagram with the brothers saluting the rising rapper in the wake of his passing.

@kiingshooter You made your mark and got your wings On many hearts, you pulled their strings From QB to Heaven, the world in between What a pleasure to have you, in our lives, in this world, in our world We shared our street dreams. Condolences to @kiingshooter family and friends. 🕊 🕊

Mass Appeal Records also posted a tweet giving praise to Kiing Shooter and noting how charitable he was to his hometown and to those who personally met him.

You never stopped giving and impacted the hearts of so many. Whether through your music or your presence, you lit up the room.

To one of Queensbridge's finest, an artist, and a true visionary, rest in power and paradise @KiingShooter🌹🙌

Shooter released his latest studio album Still Outside this year, which can be heard in the streams below.