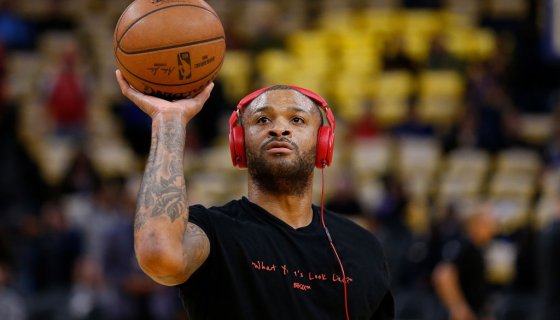 PJ Tucker may not be the biggest star in the NBA but when it comes to sneakerheads he’s definitely one of the players we most love to watch. Not because he can put on a show on any given night, but due to his habit of wearing extremely limited PE kicks when he balls on the court regardless of the creases he puts on them for the duration of the game.

Now that the and remains up in the air due to the coronavirus outbreak, PJ’s got some time on his hands and during an IG live story which was hosted by Nate Robinson, the Houston Rocket revealed that he plans on opening up his own sneaker spot in Houston this coming October.

“We’re looking to do the grand opening in October,” PJ revealed during the live stream. “We’ve got a lot of dope collabs coming. We’re going to have some fun with it, and I’m excited about that.”

Dubbed The Better Generation, the upcoming sneaker spot already has it’s own IG page and though it has posted a single post it already has 22 thousand followers.

While we’re excited to see what kind of collaborations Tucker has in store for his own spot, the timing couldn’t be worse as it seems like we’ll be dealing with this quarantine situation for the foreseeable future. We don’t wanna see a bunch of sneakerheads spreading the virus on a line waiting for The Better Generation to open it’s doors to the public. Just sayin.’ Homie might have to push back the grand opening.

During their conversation, Nate even seems to have convinced Tucker to rock the extremely limited edition Nike Air Mags during a game whenever the NBA season gets back underway.

S/O @naterobinson for getting @pjtucker to rock Air Mags when the NBA returns! 🙌 Check our IG Story to see the full “Sneak Peek Live” episode.

Those don’t seem like they were made for balling, but hey, 2020’s already been a wild year as is. So why not?