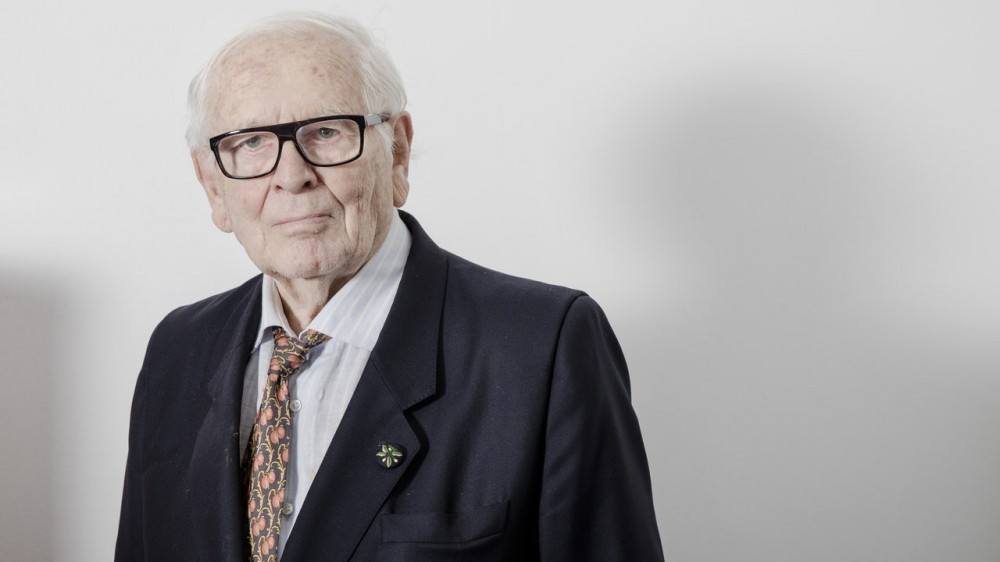 Pierre Cardin, the prolific avant-garde French designer best known for his geometric, space-age couture and his maverick approach to business that would reshape the French fashion industry, died earlier today in a hospital in Neuilly in the west of Paris, his family confirmed to the Agence France-Presse. “It is a day of great sadness for all our family. Pierre Cardin is no more,” they said in a statement. “We are all proud of his tenacious ambition and the daring he has shown throughout his life.” He was 98 years old.

“I don’t like to stop, I like to continually prove myself,” Cardin said in an interview with CBS back in 2012, a sentiment that his tireless work ethic all the way up until his death pays testament to. Renowned throughout his career for his groundbreaking approach to both design and business, Cardin expanded his empire through licensing of everything from automobiles to restaurants (he turned Maxim’s, the historic Parisian Belle Époque restaurant, into a global brand), to hotels, jewelry, glasses, fragrances, furniture, and even tableware. Though the practice of a fashion house lending its name to a variety of different products and concepts is now commonplace, Cardin’s approach was pioneering. So too did Cardin revolutionize the business model of a high fashion brand by introducing the concept of ready-to-wear in 1959, a reflection of his firmly-held belief that quality design should be accessible to all.

Born Pietro Cardin in Treviso, Italy, in 1922, his French parents escaped Italy’s fascist regime when Cardin was two years old, settling in St. Etienne, a coal-mining town in eastern central France. In spite of his wine merchant father’s desire that he should pursue architecture, from childhood, Cardin knew he was interested in fashion. He took his first apprenticeship as early as 14, before moving to Vichy in 1944, where he trained as a tailor.

Soon after completing his apprenticeship, Cardin moved to Paris, where he worked with the most famous couture houses of the time—Paquin and Schiaparelli—and decorative artist Christian Bérard to design costumes and masks for Jean Cocteau’s ballet La Belle et la Bête. By 1947, Cardin had become Christian Dior’s tailleur during the revolutionary New Look era. It was expected that Cardin would succeed Dior, but in 1950, Cardin left to set up his own firm on 10 rue Richepanse.

Though it was the costumes created for an elaborate masquerade ball hosted by art collector Carlos de Beistegui at Venice’s Palazzo Labia in 1951 that “launched” Cardin’s career, it was his more futuristic designs for which he is best remembered. Most famous of all is his “bubble dress” (named so because of the way it flared from below the waist and ruched together along the hemline) launched in 1954. His 1960s dresses, meanwhile—square-cut with large circular cutouts and geometric sleeves—continue to define space-age chic to this day. His landmark Cosmos collection in 1964 anticipated unisex clothing, while his preference of crisp but agile textiles, like jersey and wool crepe, transformed fashion entirely. (Vinyl and felt were also firm favorites, though he also developed his own fabric, Cardine, which was famously worn by Lauren Bacall in 1968.)

“The clothes that I prefer are those I invent for a life that doesn’t exist yet—the world of tomorrow,” said the designer ahead of a retrospective at London’s Victoria and Albert Museum in 1990. Beyond his cut, cloth, and construction choices, Cardin was in many ways responsible for creating the landscape of the fashion industry as we understand it today. First, he launched ready-to-wear as a concept in 1959, an egalitarian move that scandalized the fashion world and ended in his expulsion from the Chambre Syndicale, couture’s ruling body. By bringing high fashion to the masses, he effectively becomes the first-ever designer label. He was one of the first to take his show on the road, by way of destination showcases at places that western high fashion hadn’t reached out to before: China, India, Vietnam, and even Moscow’s Red Square.

The fortune he made was readily invested in classic French real estate, including the Marquis de Sade’s castle in the Lubéron district where he held annual cultural events. He also famously purchased Antti Lovag’s Palais Bulles (the Bubble Palace) near Cannes, following the death of original owner Pierre Bernard in 1991. (Cardin had in fact helped to design the Palais, which was a further exemplar of his fascination with offbeat geometric designs.)

During his lifetime, Cardin received various awards for his contributions to French design and culture, including the Order of Cultural Merit from the Monaco Principauté. He was also made an honorary ambassador of UNESCO, and a goodwill ambassador for the UN Food and Agriculture Organisation. Age did nothing to slow the eternal futurist. In 2014, he launched a permanent museum in central Paris to showcase his most iconic designs. 2016 saw a showcase in the south of France, while October 2017 saw the then-95-year-old launch a pop-up shop during London Fashion Week.

Cardin once told The Telegraph: “Clothes are important, everyone has to dress. It's like plants, like trees, you change your cover every season […] To know whether a designer's left a mark on fashion you need to close your eyes and think what they represent. Chanel left her little suit, Paco Rabanne’s about metal. Courreges left a mark as did Elsa Schiaparelli, Madeleine Vionnet…” And as for Cardin himself? There is little doubt that he has left quite a mark.